Tengen's Skull and Crossbones, a 1990 port of an arcade game from Atari, shows players why good arcade points were such a selling point in that era. Take your pick of pirates One-Eye or Red Dog and reclaim your lost treasure from the evil wizard while dodging fireballs and digging up more treasure. Well, actually, the lost treasure is a princess, you won't be dodging much of anything with your ridiculous hitbox, and digging up treasure really means jumping on clouds until they explode and reveal loot. But who's judging? 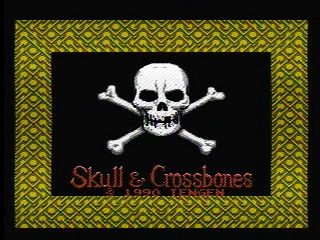 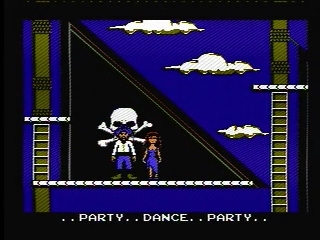 What the heck possessed me to do this one? Well, it owned me when I played it as a kid, and I was surprised at how easy it is when I went back to it years later. Seeing every reviewer swear this game is impossible inspired me to show just how simple it is, hence what you're seeing here!

This game's challenge comes entirely from forced cheap hits caused by your character's huge hitbox and lack of mobility, dealing with random flying bolts all over the screen (these freeze you on hit), and getting the hang of the controls ? I always say this game has permanent ice physics. Speedrunning brings the additional factor of planning your route to acquire the least amount of ammo needed to finish the game while spending the least amount of time waiting for said ammo to appear.

This game has 2 types of stages: Pirate ships, and "land waves". All stages require you to kill a certain number of enemies to reach the boss (rats and barrels count as kills, even getting hit by a barrel), and this number increases from 15 to 20 to 25 as the stages get harder. The pirate ships all have the same boss (just with more HP on the harder stages), while the land stages each have a unique boss. The pirate ships offer direct ammo pickups as well as health at the end of the stage (all of which must be acquired to finish it), while the land stages have no health and only offer treasure (which is traded for weapons after the stage). I find that you get the fewest deaths in a run if you just do the stages in order from easiest to hardest, to alternate treasure with ammo + health.

You have 3 main weapons, the sword (the weakest and by far the worst all-around), the knives (pretty good, a bit more damage than the sword), and the gun (by far the strongest and best overall). Each ammo pickup gives you 3 uses of the weapon, and treasure is traded for ammo as follows:

Generally, I get almost every gun pickup and the majority of the knife pickups. There are also a few sword pickups that just happen to be along the way. You can kill rats by stepping on them and destroy barrels by jumping on them (or even getting hit, as mentioned earlier), so I do a good deal of this to save ammo.

You can also find various hidden special weapons, including a power punch (not worth it for a speedrun since you only get 1 use from a pickup), a spark that kills all normal enemies on-screen, a magic wand (15 shots), and shurikens (20 from the pickup). There is also a shield which reflects Medusa's shots back at her, but this is very slow so I don't bother with it. All of these weapons deal the same amount of damage as the gun, and their extra ammo is a huge help.

The rest should be pretty self-explanatory. One more neat trick which even the game itself tells you: Each time the wizard appears you can hit him a couple times, and all of this damage carries over to the final battle with him. You can take over half his life before you even fight him proper!

Overall I am very happy with this run. It's impossible to avoid dying and getting frozen at least sometimes, and I especially like finishing the game with 3 bullets and nothing else to my name. I was worried I might have been collecting a bit too much ammo, so that was nice to see. The end of the final battle was a nice touch, too!

There isn't really anybody to thank for strategy advice, as this game was a rare solo project for me and there isn't even a published TAS for it. I just wanted to give my usual thanks to the people who watch my streams (http://www.twitch.tv/srkfunkdoc) and say that if you enjoy bad games like these I definitely have more planned!