Released in 1990 by Rare, ltd. Snake Rattle 'n' Roll is a game with moments that make Battletoads look easy. The game starts off innocently enough as an isometric platformer with an interesting take on platforming, even if the controls are awkward. As the game progresses, the traps become more devious, and the game makes you wonder whether this is a cynical exercise on the part of Rare. It's as if the programmers thought they were clever for inserting as many traps and steep hills as possible in the later stages. The pinnacle of these traps culminates in the last area of the tenth stage, which has been affectionately nicknamed the "Stairway to Hell". 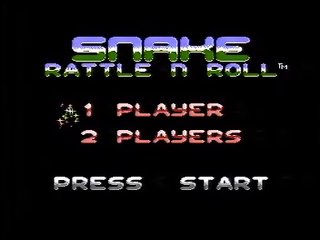 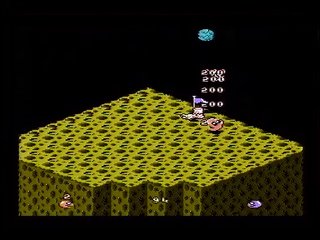 Snake Rattle n Roll is considered to be a fairly hard game. The 45 degree viewing angle can sometimes be misleading. When I started beginning this run I thought the jumping around the level would be a pain, but after some practices I noticed I began to notice that the luck needed in getting the proper Nibbley-Pibbleys (the things you eat, yes that's what they are called) was way more annoying.

All in all I'm happy with this run.

Level 8 I dislike the most, because you almost need pure luck and because of the view it can be hard eating the Nibbley-Pibbleys. I got an average time in this run. (highest I've gotten was 4 seconds faster, but mostly am 1 sec slower)

Level 9 went very well. Some good jumping and no bad luck with the Nibbley-Pibbleys. It's not my best run but it's just above average.

Level 10 went nice with the randomness of the Nibbley-Pibbleys again. After I've eaten them I am relatively slow on the next part. I make a couple of small mistakes and almost die twice, but manage to make it just in time and get into the exit. It was a nice run, didn't lose too much time on the jumping part I believe.

Level 11, the final boss. Well he's real easy to be honest. I must confess I was a bit careful here, as you might be able to see, but all in all it's a good fight.

All in all I think this is a pretty good run, no real bad luck with the Nibbley-Pibbleys and no real mistakes with jumping and a good end boss fight.

I'd like to start with thanking ktwo for commanding me to do this run. Without him I'm 100% sure I would have never done this run.
Furthermore I'd also like to thank everyone else, including the SDA crew.

On to the run.
The first eight levels of this run went really well, after that I got some bad luck and a couple of execution mistakes.

I've always tried to minimize the amount of luck you need. So I've tried to never rely on the Nibbley-Pibbley dispensers (the things shooting the balls) On to level by level analysis.

Level 1:
Can't say too much about it, simple level.

Level 2:
Again not much to say, I did avoid 1 mushroom which also can be jumped over, but that maybe costed me about 0.4seconds or so.

Level 3:
Again trying to go for most consistent way possible.

Level 4:
There is another small short cut in this level that I did not take. It's actually not that difficult, but I found out about it pretty late and I did screw it up sometimes. I didn't want to risk it this time.
In the short cut you bounce on the first toilet seat up to the higher platform.

Level 5:
You need some luck here with the Nibbley Pibbleys. I didn't get too much luck, but it wasn't all that bad either, so I was happy altogether with this level. All in all it went pretty good.

Level 6:
The only real tricky part here is the short cut you have to take. You got 2 chances to bounce of the bell, the 3rd time you won't bounce and the bell will be destroyed. Luckily I made it in 1 go. Unfortunately I had the worst possible luck with the placement of the swimming item you need to climb the waterfall.

Level 7:
This level can also be very tricky, the first part goes really well, sometimes you get hit by those christmas trees and it could destroy the run. The waterspout jumping doesn't go perfect, but considering that part can be a real pain I'm quite happy with how it went.

Level 8:
Not much to say about this level, I did pretty good here. Even better then my warped run.

Level 9:
This is where the needed luck really kicks in and because this game hates me it of course doesn't deliver the luck I need. It's not all too bad, but still it could have been faster (as seen by my warped run) No real execution mistakes though.

Level 10:
And again some bad luck with the Nibbley Pibbleys. In the end I also became nervous and wanted to really not die as can seen by my gameplay. Those slippery slopes do not make it any easier unfortunately.

Level 11:
I just the quickest, most safe way I knew. If I'd really want to be fast I could probably kill him 1 or 2 seconds faster, but you'd have to get really risky and that definitely isn't worth it this late in the game.

Finally made it. I hope you enjoyed the run.
If you want more SRnR action and haven't seen the bloopers yet, you might want to check those out to.