2012 Indie platformer Snapshot allows players to cut out parts of the world by taking a picture with their camera and paste them back into other spots to solve increasingly complex puzzles. This technology is expected to come to your iPhone in 2016. 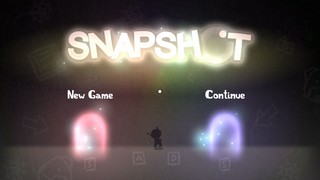 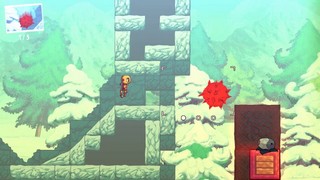 Snapshot is a brilliant little puzzle-platformer about a robot with a camera that can capture and place physical objects. Photos of moving objects preserve their momentum, which lets the player redirect it at will. It doesn't take a lot of imagination to find ways to break this game, and I found it so much fun that I dug deep, determined to optimize it as much as I could. It's one of those games that's a neat enough experience on its own, but as a speed game, it really becomes something special.

Into the Forest -
There's not much tech here apart from the barrel toss in Part 3, so I just try to play around with the gallery items in every run I do.

Spikes of Doom -
This level introduces boxes, which I use for momentum boosting throughout the run. The strat in Part 3 is brand new, and this is actually the first time I'd done it smoothly in a run.

Photo Zones -
I missed a jump in part 1, but got the difficult boost afterwards. This level is all about optimizing movement and midair jumps, especially in Part 3, which has a lot going on.

Bouncing Away -
Most runs end here, on the spring jumps in Part 2. There's a safer strat that's only a second or two slower, but this looks so cool I decided it was a requirement (it's early in the run anyway). I missed the bottle toss in Part 3, but I'm bound to miss a few boosts somewhere in the run.

Elephants Afoot -
Part 2 was a little sloppy. The killbox on the spike platforms moves slower than its safe zones, so when you fling it, you can boost and jump off the spike side, which looks really funny.

Rolling Snow -
Pretty smooth, got all the momentum boosts. Only annoying part is pasting the giant snowball in Part 1 quickly.

Ice To Meet You -
Some trouble with the damage boost in Part 1. I was a little thrown off from being boosted so high. The timing in Part 2 is very tight, there are a lot of failsafe strategies if I screw up, but the fastest strat goes perfectly.

Snow Problem -
DAT SNOWBALL BALANCE. It has to be pixel perfect, I've never seen it before. Honestly, I was so sure the run was going to die after this, because there's no way something that cute could happen in a finished run. I'm as proud of this as I am of the Pulling Force skip. Execution isn't as sharp as I'd like, I was hesitant in Parts 2 and 3, but the clear times are still decent.

Creepy Crawler -
Near-fiasco jumping off the turret in Part 2. You're supposed to only capture the turret itself, but I got the projectile along with it, and if its hitbox intersects with yours when you try to paste, it won't paste. I can't believe I managed to make this jump. I forgot to position the cursor for the door at the start of Part 3 and walk past the doorway for the next level because I'm thrown off by this. Got the turret hat in Part 1, though!

Where There's Smoke -
Perfect Part 1 (well, you can destroy both of the ice blocks in front of the crawl space with the fireballs, but this loses no time to that). A bit sloppy Part 2, I've had much better spring management. I used to be able to reliably capture the turret in Part 3 before it fires, but I can't do it at all anymore. Not sure why.

To The Sky -
Can save about two seconds on Part 2, but I got the paste glitch, where the game thinks a captured object's hitbox takes up the entire photo (or extends beyond the photo? I'm not sure).

Fluffy Clouds -
Part 3 has ended so, so many runs. Snapshot drops to a very stuttery 30FPS on its big levels whenever there's a dynamic visual effect (like a photo flash or keyhole unlocking). On top of that, the cloud hitboxes are unbelievably finnicky, and very hard to walk on without falling off randomly. I can save 4 seconds on this level if I do no setup at all, which usually gets me killed.

Bunny Hopping -
I fall off the platform due to nerves, since the run is going well. Luckily it's not over a pit. Parts 2 and 3 go smoothly.

Vanishing Clouds -
Miss-timed the slope boost on Part 2, but minor time loss. Part 3 is a frequent choke point for my runs, I missed the first cloud capture twice in a row in my previous PB. It goes pretty well here, can save about a second or two with ideal execution.

Gale Force -
Wind is probably the most difficult mechanic in the game to optimize, and the reflexes needed to quickly position the gusts in Part 1 and 2 make them surprisingly tense to play. Because of the difficult navigation in the chapter hub, I can't really position the cursor ahead of time to make Part 1 easier. Part 3 is one of the most technical levels in the run, and it's a crapshoot whether I can get the fastest strat for it, or whether I have to improvise. I lost a few seconds here compared to an ideal outcome.

Copy Paste -
CHOKE. The only death in the run in Part 2, and a failed momentum boost in Part 3. I lost 4 seconds off my splits, which already weren't great. If this level had gone perfectly, I might've cut the 22 (but I'd probably need a bit better optimization somewhere else as well).

Second Area -
Stumble in Part 1, dangerous strat in Part 2. I'm surprised I went for that quadruple box jump, glad I practiced it before the run. Missed the downward spring boost, but it's a strat I've practiced for about 10 minutes total, so that's not surprising.

Pulling Force -
Welcome to Snapshot's Richter skip. I don't know how close to pixel/frame perfect the corner boost is, but it's very difficult to get consistently. The acceleration from the boost depends on your speed and position when you hit the corner, and it's possible to not get enough speed to grab the ledge (or very rarely clear it without a ledge grab). Getting it first try saves about 17 seconds compared to the speedrun strat for doing the level normally, as I did here. You can fail it up to 5 or 6 times before you start losing time. I can't believe I did it in one go. I lose about four seconds in Part 3, but I don't even care (and magnets are almost as hard as wind to optimize consistently anyway).

Mag Lev -
This level has killed a few runs, and after first try Pulling Force skip, I was about to have a heart attack. Luckily, everything goes pretty smoothly. I'm a little careful placing the magnets in Part 3 because I lost a record-pace run to it just before doing this one.

Clones -
The most anticlimactic final set of levels in any run ever. Part 2 is the last place the run can realistically die. The box boost isn't even necessary, it saves about a second. I almost didn't do it, and I'm glad it worked.

End -
All that's left is hitting the stair boost in the final corridor to save a half-second or so.

I was surprised to get this run as quickly as I did after coming back to the game. Apart from Copy Paste, the execution is very smooth, I have a lot of levels that go as perfectly as they ever do, and some that go even better than that. On top of that, I got the Pulling Force skip on my first try. It might be possible for someone to beat this time with tight optimization and without the skip, but it would take a lot of practice. So if you're interested in running this game, don't let the skip scare you off!

I think, given time, I could get a better run than this, and I'll probably try. But this is a solid run and I'm happy with it.

Thanks to:
Raelcun for his early run of the game.
Razielim for the first record run at 27:19 and advice about game mechanics.
Marksel and Steeh for discovering a lot of neat tricks.
TheVoid and mattBlitz and everyone else in the forum thread for knowledge and support.
Blechy for his interest in the game, and everyone on The Sunday Sequence Break for keeping me motivated and wanting to get a better run.
And anyone else who watched or runs obscure games that don't get a lot of attention. Every bit of feedback is appreciated!