Released in May of 2002, the sequel to everyone's favorite nutshot simulator is back, now with enemies who can shoot through walls and point blank headshots that miss for no good reason. Like its predecessor, Soldier of Fortune II has unrealistic but highly entertaining ragdoll physics. SoF2 was inspired by tactical shooters such as Counterstrike and Rainbow Six. 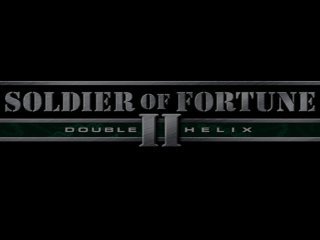 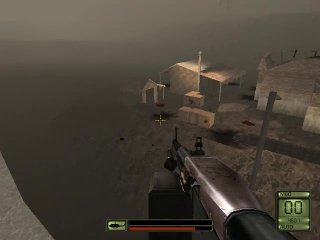 Tip for the viewer: DivX/XviD can't cope with the detail levels and high motion of this game so I can't recommend anyone to watch them. The only reason there are LQ and MQ XviD versions is because Radix still requires them. Also, from part 40 and on the sound is a little different from earlier segments. This is because I encountered some problems with the sound after a hardware change, which forced me to change the sound output for the game to something less complex.

Before I go on my "this game sucks donkey balls" rambling I would like to hand out a few thanks, in no particular order. The following people had one hand or another in getting this run done.

Soldier of Fortune 2: Double Helix... what is there to say about this game? For starters, this game just sucks and it is probably one of the most buggy and random games ever created. What Raven did to the Quake 3 engine when they created this game is scarier than underwear worn for 3 weeks in a row. It seems that (broken) pseudo-random number generators control everything in this game, from how many shots you will hit till how many times you will magically get stuck in the textures, and of course everything in between those two, like if the enemies will have red hearts on their underwear or pink leather string. On top of that you have to add the cheat like behavior of the NPCs, they play like they have wallhack and aimbot, completely unaffected by smoke and stun grenades (sometimes you can actually make them work) and not to mention that the game change grenade timers on-the-fly in their favor. Sometimes it even seems like the enemies have some sort of bullet dodge ability, and some sort of speedhack which let them move around at 150km/h when they're crouching, come on give me a break. This game is cheating so hard against the player it's not even funny.

I think they tried (judging by the result they didn't even try) to make a realistic shooter game, but they failed horribly with everything except... no wait, they failed horribly with everything in the game. In short, this is a total failure in game design. As a side effect they managed to create a game where skill only play a minor role in your success, luck is responsible for about 90% of it.

Since this game is so random as I just described, making up any precise speedrunning strategies is just a waste of time. Simply just try to find a way that seems fast and repeat till the random numbers go your way. You can never be sure that your sniper rifle will hit the target at a point blank range, nor any of the other guns for that matter. The inaccuracy is so bad it's almost better to aim outside the NPCs if you want to hit. All hail Cvar wpn_inaccuracy "1"! Spray and pray, make my day!

This game has so many dull levels so I decided to make a list of the least interesting parts in this run, so you can skip to download those parts in case you don't want them. Part 6, 7, 14, 15, 22, 28, 35 and 59 are parts that are considered very dull and boring to watch. Unless you're dying to see the entire run I really recommend you skip those parts.

Q: Why does the run start on level 2?
A: The first level is a cutscene level where no actual playing is done, after talking to Radix he agreed that cutscene levels are not required to be included in the run.

Q: Why are some levels missing?
A: There are several cutscene levels in this game.

Q: What is classified as a cutscene level?
A: A level where the only thing you have to do in order to get to the next level is to skip the cutscene. Briefing levels where you more or less control Mullins and/or have to navigate a menu are not classified as cutscene levels. Except for Helicopter Insertion where mikwuyma's reply was "that's a level?".

Q: In many levels you stop to fight a bunch of enemies, that can't be good.
A: There is a reason for every single kill in this run. Some areas are literally impossible to get through alive without killing all enemies first.

Q: Why are you waiting for friendly soldiers to catch up and sometimes not?
A: If you run too far ahead you will be executed for "jeopardizing the mission". In some levels where you just have to reach a certain point to finish the level you can abuse the safe limit and reach the end before they execute you. In other levels you can't do that because they must reach that point as well before the level is over, since they don't move when you are outside the limit it is faster to stay within the limit in those levels.

Q: Why do you wait for such a long time before you skip the cutscene in segment 35?
A: There is a bug in this cutscene, skipping it too early will make it impossible to finish the level because the briefing and weapon selection screens never appear.

Q: In Airport Terminal you are flashed when you save, but in the next segment the flash effect is gone, how come?
A: That's a bug in the game.

Q: In some levels where alarms can be triggered you seem to be too cautious.
A: Triggering the alarm on lower difficulties won't affect much but doing so on SoF difficulty will affect a lot. A triggered alarm result in infinite enemy spawn all over the place, which in turn will yield a slower run because there are more obstacles to get past.

Q: Your aim seems too good to be true now and then.
A: Skills baby, skills!

Q: Why don't you hit like that all the time then?
A: Read sections 3, 4 and 5 of the comments one more time.

Q: How come certain scripted events and enemy spawns sometimes aren't there? Is the game hacked?
A: Scripts and timing is very buggy in this game. It is not hard to prevent triggers from doing their task, its all a matter of being fast enough.