Solomon's Key was ported from the arcade to many platforms. The NES version was developed by Tecmo and released in 1987 in the US and in 1990 in Europe. As the wizard Dana, you must restore order back to the world by finding "Solomon's Key", a powerful book that can help seal away the demons that are causing chaos and darkness. Mixing puzzle and platforming action, the game consists of one-screen levels. Dana has to find the key to open up the door to the exit in order to advance to the next room. Filled with secret items (some of which contribute to give a better ending), a very summaric manual and complex solutions to many of the rooms, Solomon's Key has a reputation for pushing even the most seasoned players to their limits. 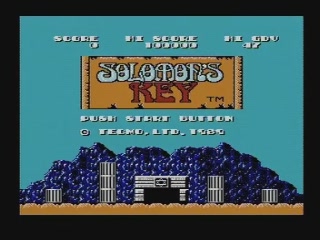 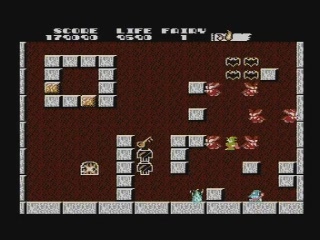 For speedrun related information on Solomon's Key (speedrun techniques, item and enemy descriptions and information about the different endings), check out the sda knowledge base:
If you want to discuss or share information related to speedrunning this game (tricks, strategies, ...), use this thread:
https://forum.speeddemosarchive.com/post/solomons_key_nes_run.html
If you have questions or comments about the run, use the existing verification thread:
https://forum.speeddemosarchive.com/post/solomons_key__april_7th_2013.html

Room comments
Room 1 - The life timer is quite unreliable in this game, but usually only by 10 or 20. In room 1 however, the difference can be more than 400. Finishing with a timer of 8900 is pretty much as low as it can go, so it was close to optimal in this run. During countdown, each frame counts down 80, so it's 5 frames faster than the potentially slowest result. Meaningless details ftw. :-)
Room 22 - See the comments for the best ending run to get more background for this room. In a normal ending run, I take a different route in room 15, which nets me the required numbers of crystals of Rad to get enough reach of the fireball for taking out the last Saramandor in room 22. However, I remember having much worse statistics of it actually working (maybe only 25%) than in the best ending attempts (at least more than half of the time). Well, it worked this time, which is what counts...
Room 48 - The only real mistakes of the run appear in this room. I create an unnecessary block on the right side of the room. It might look a bit stupid, but many times I chain together inputs before they are actually visible on the tv. If one input is wrong, the rest will look messed up. A similar situation can be seen in room 20 of the best ending run, where I twice create a block in the wrong spot and then try to jump to the spot where the block was supposed to have been created. I also manage to bump the head during one of the drops before the room is to an end. In total, these mistakes cost around a second in total. If I were to revisit this category, I'd probably go for a running edge jump in the top left corner (before dropping the two blue flames), which would save one second.

Final thoughts
I would have liked to get a run without any visible execution mistakes (I guess that's what all speedrunners wish for), but alas this was not the run. Other than the mistakes, a little more time could be squeezed out by micro-optimizations and by implementing some more difficult techniques such as running edge jumps. However, I must say that while this is category has its right to exist, I do prefer the additional challenge that the best ending provides. So unless there are discoveries for several seconds that could easily be shaved off (and it would surprise me if there were), I don't really have any plans to come back to the normal ending.

Credits
- SDA for publishing this run and for providing the community with a non-commercial platform for hosting speedrun videos.
- Anyone who has contributed to the development of Anri-chan.

Final thoughts
I'm not too happy with the execution in this run. I've had a few runs with cleaner execution that ended in the 40s. The lack of execution in this run was however compensated by good luck and risky strategies that paid off for a time that was better than comparable runs. To be honest, any run that gets through the ordeal of the last rooms (especially room 47) is a small miracle to me. Submitting this run means the end of me playing the game for this time. I won't rule out coming back for a run with cleaner execution, but that would probably require finding a few new time savers first.

Credits
- SDA for publishing this run and for providing the community with a non-commercial platform for hosting speedrun videos.
- Anyone who has contributed to the development of Anri-chan.
- Agwawaf, whose TAS gave me a few ideas on how to improve.

Speedrun information and a comment about the category
For information about speedrunning Solomon's Key and to get a better understanding of what's going on in this run (including the name of tricks mentioned below), go to the sda knowledge base (referred to as sdakb in my comments below): https://kb.speeddemosarchive.com/Solomon%27s_key

The fastest way to get the best ending is to use warp wings in room 23 (warp to 29) and in room 31 (warp to 37). The remaining room solutions remain identical with this run (except for a very minor detail - no need to pick up the super fireball in room 39 like I did in this run). Instead of using warps, it's possible to death abuse and save a few seconds in room 32 (and possibly half a second or so in room 36 - it depends on which room solution is used). I have chosen not to use deaths or warps. Personally, I think all the rooms in the game are somewhat unique and worth playing. The challenge is also considerably higher going through all the rooms deathless.

Final thoughts
Not long ago, I searched the sda forum to see when I made my first post about starting to speedrun Solomon's Key. Almost 5 years ago... I have played many different games between then and now, but I have also returned to Solomon's Key several times. It's probably the game I have played the most of all games. Each time has meant including new techniques, new room solutions and getting lower times. This year I also made the jump from pal to ntsc. The game physics in the pal-version are different, but I could still build on a lot of my experience from the pal-version when starting to play ntsc and developing the room solutions.

I'm happy with the route as things stand right now. Previously, I was mostly limited by not having found the fastest solutions. Now, I know of several faster solutions, but they have been excluded because of the difficulty. To me, that means I'm getting closer to my limit for real-time speedruns. It's now mostly an exercise in grinding enough attempts to pull off a run with good as few mistakes as possible, which brings me to my next point.

The execution could definitely have been improved by quite a lot. Without talking about minor frame improvements, I count around 13 seconds of mistakes. (7 - 1; 24 - 1; 28 - 5; 35 - 1.5; 38 - 1; 42 - 1.5; 48 - 1; Solomon - 1). That's in the upper end of what I consider acceptable (or even a few seconds above what I was aiming for). The problem is that just completing a deathless run is an achievement for me. The last completed run happened around half a year ago (and this is more or less the only game I have been playing this year). I've had one or two more completions before that (but with huge time-losses, so not really to be considered as speedrun material). The low number of completions has an influence on how much I can reset. I try to be fairly strict in the first half of the game, but past a certain point, I just need to take the run as it is or I would risk never getting any completed runs.

I have a feeling this might be my last Solomon's Key speedrun (but it's absolutely not a promise :-) ). Both the normal and best ending categories are now representative in terms of the fastest strats that I'm aware of. There are faster solutions, but they would increase the risk factor by a lot and it would require another level of dedication to include them. But if someone with interest in this game decides to try and push the times down further by less execution mistakes and/or including riskier strats, they have my support.

Quick note about the audio
There are two audio tracks in the video. I realized too late that there was a really bad white noise in the recording. It's due to a bad cable, which has now been scrapped. The first audio track is a noise-reduced version, which is the one I recommend. However, I have also added the original audio as the secondary track for reference.

For information about speedrunning Solomon's Key and to get a better understanding of what's going on in this run (including the name of tricks mentioned below), go to the sda knowledge base (referred to as sdakb in my comments below):
https://kb.speeddemosarchive.com/Solomon%27s_key

Background
After my last update in 2014 of both the any% and the best ending runs, I thought I was done with this game, but apparently I had another improvement in me! It seems like there is or has been speedrunners for pretty much every half-decent Nes-game out there, so I'm surprised that no one had picked up Solomon's Key to see if the game could be pushed further. It's not a perfect speedgame, but it's still very good and imo better than many other games with a bigger speedrun scene. The only other players I was aware of were from Japan, but they're using more basic strats, so there were (seemingly) no attempts from them to go faster. That was until this summer (2016), when yogidamonk started learning the game. During his practice, he found a way to ensure good RNG in room 29 (I previously thought it was a coin toss worth 0.5 seconds). That finding alone wasn't enough to get me back, but with the "Best of Nes" marathon around the corner (a marathon I have missed the two previous times) and a wish to diversify my play time to something more than just Ikari Warriors, the pieces started to fall in place. Relatively quickly, I found new routes in room 15 and 31 for a total time save of 3 seconds, which pretty much convinced me that an update to my previous run was necessary. With more and more of my focus going into this game, I found minor time savers in a some of the other rooms as well. I'll detail that below.

Final thoughts
I'm very happy with how things went up until the last room. It's very disappointing to fail so near the end though, but what can you do? Well, at least that (and the several time savers I voluntarily left out) leaves a bit of room for someone else to push the envelope of this game! Despite the frustration over this mistake, I'm still happy with the final time and having a new run that is representative of the latest routes. My goal was 12:51, which was mainly to account for a few expected mishaps with edge jumps or similar. I'm not sure this is the right place, but I can still mention something about the best ending run. Interestingly enough, the new findings have virtually no impact on the best ending route. Room 15 and 31 are solved differently. The only new findings that could apply are in room 48 (a couple of frames) and in Solomon's room (0.2 seconds).