First released in late 2003, Sonic Heroes was a game that set many firsts for the franchise. Although it was the first new Sonic game that wasn't released for a Sega console, it still retained the tight platforming of the previous games in the series, just in 3D. It was also the first in the series to include as many as twelve playable characters, broken up into four different playable teams with unique play styles and level design. Despite the decent critical reception, the bugs, glitches, cheesy dialogue, and stop-and-go play style can't be ignored. 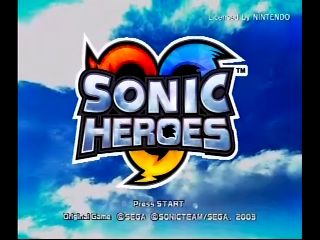 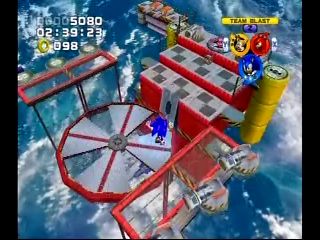 Timing Note: All runs are manually timed because of the team blast glitch. Read the Team Sonic comments for more details.

First off I'd like to say this is my first speedrun attempt to be up for submission anywhere for publication and I was nervous to do so. I've been coming to SDA for quite a while now and went through and looked at a lot of speedruns through my time being there and grew to learn and appreciate this practice more and more. I come from The Sonic Center which most people know as THE place for serious Sonic speedrunning and that's the very place where my skills kept growing to where I am now.

Sonic Heroes...is something I can't stand anymore. This came about when I would speedrun this game and got better and better and unfortunately, that's where every problem occurs. This game is bad, I mean REALLY bad. This game is littered with glitches and bugs that can stop you in your tracks and make anyone cautious to even attempt a run like this. Finishing is a chore and luck is an absolute must in this game. Something WILL go wrong everytime you decide to give this game a go for whatever reason. This isn't normal and it makes Sonic The Hedgehog (2006) look decent, which isn't easy :(

Now I put in the category for "Real-Time" for one reason, the Team Blast. This is a mechanic in the game that allows you to clear out normal enemies in one attack or to heavily damage a boss. Thing is, you have to sit through an animation before you can control your team once again. There is a way to abuse this with a glitch found years ago called "Team Blast Glitch" or "TBG". It basically allows all teams to fill up their Team Blast meter to full at a faster pace than normal. Normally, you'd have to get rings, kill enemies, or find a Team Blast capsule to fill it up all the way. With the glitch however, you'd just have to do this 3 times in a row and it fills up much much faster...unless you just so happen to be near a capsule, then that is faster. I know the glitch is allowed, but the thing is, if I were to abuse this glitch, the run would be much longer than it is. It's not apparent with Team Sonic and Chaotix, but even with them, you'd be abusing this on bosses and such and that would get quite boring. Team Dark and Rose gets a larger benefit. Team Dark can stop the timer for 10 sec with each use essentially meaning they can keep using it over and over during the frozen time state to get extremely low times. Team Rose on the other hand gains abilities and powerups with each use, but the most useful is speed shoes.

Ok now that that is settled, on to the run itself.

That's it then and I hope you like it. Maybe another run in the future, most likely not though >_>

If I've forgotten anyone, sorry :(