Released in August 2000, this sequel to Blood Omen: Legacy of Kain, takes place a millenium later. Kain has taken control over Nosgoth and has vampire followers. Raziel, evolving before his master by growing wings, is executed by being thrown into the abyss. He wakes up centuries later as a Reaver of Souls and hunts down his former vampire brethren on a quest of revenge and to challenge his maker. 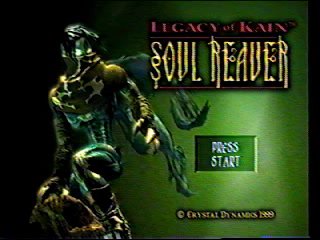 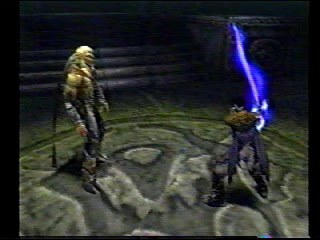 Before I go into the mistakes I made in the run I wanted to talk about the game itself. This was the first game I ever recorded. I liked the story and the atmosphere...and since the game is a bit long I didn't want to play the whole thing every time I wanted to see different cutscenes. I don't quite remember when I started to record the game, but most of the recordings I had were cheated. I was doing it more for entertainment purposes only. I could still die...I just didn't want to collect all the life pieces so I'd use a code to get them.

Anyway, this was the first game that I did speedruns for. If I had known that there was going to be an 'others' section of SDA I wouldn't have cheated. If I had done this legitly five years ago I would've been able to go through the whole game without doing a single huge mistake.

I'd like to apologize for some of the really bad camera angles and the darkness of the game. I'm also sorry for the Dumah chase. If you get too far away from him he stomps the ground so you're paralyzed for a few seconds. Having him be right up next to me is the easiest way. I used the PS2's smooth texture feature for the game. I think it makes the game less dark, but not necessarily bright.

Melchiah - The first one was because of glare from a window. I'm not making this up. When I move the block to the right and put it on top of the other block and I get on and jump and can't reach anything. I forgot where I was at. My bad. Melchiah wouldn't quite cooperate so I do the lever twice and it didn't work. 3rd times a charm.

Kain (1st) - No mistakes here. I was happy I hit him 3 times without him getting me with lightning.

Zephon - In the first pipe room where you have to go spectral and then the one pipe moves and becomes a thing for you to walk on I fell off twice. I missed a jump in one of the pipe rooms. Only cost a few seconds though. The rest of the place went smoothly.

Rahab - I fall off a platform once. After I beat the boss and go back up the spiral staircase I fall into the water. I was supposed to do a standard jump instead of L1 jump. Luckily, I got to where I was supposed to be at. Cost me less than thirty seconds. A portal you can activate before you fight Rehab isn't accessible after you beat him so I had to go through the water. The camera is always horrible when you are going down or up a spiral staircase underwater. If you can't tell I come out of the water in one of the very first sections of the game. Here, instead of going through the portal I could've gone out regularly since the entrance to the next area is only about 10 seconds away. I didn't know which way would be faster...but I figure that since the difference between them would only be a matter of maybe 1 second or less I'd just do what I had done the rest of the game so far...use portals.

Dumah - The place went really well. Near the end I was trying to jump up onto a platform and I don't know if I wasn't positioned right or what, but that sucked. I ended up going spectral after Dumah chased me all the way back. If I had stayed physical for five more seconds I would've pulled the switch and been done with it. The way it is I have to wait 45+ seconds to go physical again.

Kain (2nd) - This went pretty well. I missed a jump halfway through that cost me a second or two, but no big deal. I ended up going spectral more than I wanted to, but it didn't cost much time. Hitting Kain the third time is always more luck than anything. I was just glad that it didn't take that long.

I know there are certain parts of the game that I take rather slowly but I figured it would be easier to take another second or two to do something instead of rushing through and screwing up horribly.