Released in 2001 by Runecraft and Zombie Studios, Spec Ops: Ranger Elite is a military-themed tactical third-person shooter game where you travel around the world fighting terrorists with your best buddy. It's like Gears of War but less over-the-top macho and more sneaky sneaky. Sneaky. 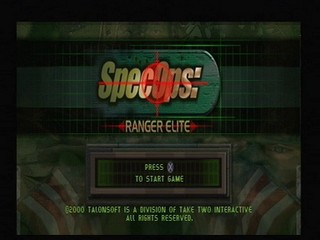 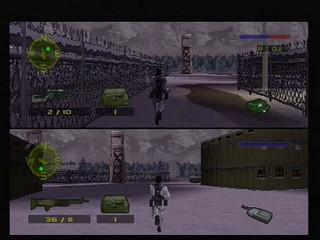 SpecOps: Ranger Elite is the second installment in the series on the Playstation, and the low retail price it had when it was released does not make up for how bad this game is. Slow, choppy controls, simple and boring level layout, dull graphics and huge differences between the rangers are just some of the flaws that this game suffers from. The fact that you run around with the sniper rifle and kill people from long distances while running is pretty badass though, and adding a co-op mode to all that...well, then you got a game to run :)

We borrowed this game from a friend a long time ago but never finished it. Looking for a easy game for a co-op run, this one came to mind as it had a co-op mode and no one would likley have run it before since it's so bad, and that's really all there is too it. It performs a bit sluggish at some points in two-player mode, but it's somewhat playable for most of the time.

The ranger at the top is played by J.Y and the one below is played by DanE. The sniper and the machine gun are the best weapons by far and these are used exclusively apart from phase 2 in the third mission, were DanE uses the rifleman instead. J.Y uses the sniper ranger on all levels apart from the first one. All levels were played on the "Sergeant" difficulty setting, which is equal to hard difficulty.

In order to complete a level/phase, you have to complete all objectives and head for the waypoint (or extraction point depending on what phase you're currently playing). Both rangers must be in the area where the chopper lands before the mission can be completed, except in phase three on mission three where you don't have to be at the same spot together to trigger the cutscene.

Most of the time the machine gun will take the lead and kill everything in sight, which leaves the sniper to do tasks that doesn't require that much gunfire. The sniper can only carry 5 rounds per magazine and will have to stop more often to reload compared to the machinegun, which can fire up to 90 rounds without reloading. On the levels where different routes are required, this diversity can really come in handy. As mentioned before, the auto aim is insane and you can hit people with the sniper rifle without the scope while running at the same time! The machinegun can take down enemies from long distances too, and many times it's possible to just run and gun like a unstoppable killing machine. Not realistic in any way, but highly useful in a speedrun though!

This run took just about a week to complete. Even though the game is bad, we actually had a great time making this run. There are a total of four games in this series released on the Playstation, and if any of the other games are as easy as this one, we might even do another run in the future. Only time will tell... ;)