Released first in 1983 for the 8-bit Atari consoles with later ports to the Commodore64, MSX and NES, Spelunker is a classic Jump-and-Run with a main character more fragile than arcade Mario. On your way to the hidden treasure you not only have to avoid countless traps, you also have to avoid plummeting to your death by simply walking off the curb. 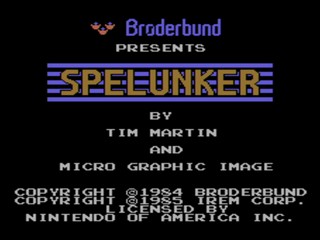 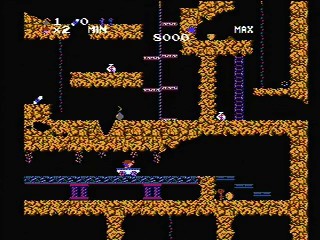 So here's my first attempt at actually running something after following the SDA/speedrunning community for awhile. I was introduced to the whole shebang through Josh the Funkdoc, and watching his runs and others' always made me want to try running something myself.

This is one of my favorite classic games, though it seems to have a bit of a reputation for being a bad game. I suppose a game where a lot of the challenge is overcoming the controls themselves could be seen as that, ha!

If you aren't familiar with the game, it is notorious for its very specific brand of difficulty. You cannot fall much further than the height of your character without dying, and it is very easy to do so while climbing ropes (and to a lesser extent, ladders), due to the fact that you can fall off of them by moving left/right, which is necessary for jumping off of them. There are various other hazards as well, such as running out of air (which you must deplete at times to fend off randomly-spawning ghosts), and any standard contact with enemies and obstacles, as you'd expect from such a game.

The central speedrunning strategy for this game revolves around manipulating the game's respawn system. Whenever you die, you will respawn from the location of the last item collected, excluding keys. The initial elevator and the geyser in stage 3 also function as spawn points (the latter not seen in this run). This allows a strategy of jumping over specific items (which requires precise timing) on the path to a key, then suiciding to avoid backtracking to the original path.

This game is a bit dependent on RNG, as the only way to gain extra lives outside of completing stages is by collecting the red/white star item, which can randomly give an extra life, along with any other normal item. Fortunately, only a single extra life pickup is necessary for this particular run, despite many suicides.

Lastly, there is a point in stage 3 (the geyser) which severely limits the practical speedrunning potential of this game. I'll save the details for that section of the notes. This is why I sat on this run for so long, trying to find a way around it but never getting the results I wanted, without pursuing some of the more insane aspects of the game.

This begins with some finicky and somewhat unnecessary jumps off the ramps in this section, mostly just showing off. Noted because this is more or less the furthest you can fall without dying, as jumping from the flat plateaus will produce such a result.

There is a simple but significant method to bombing the rock here, and in a few other places as well, without scrolling the screen. Rocks must be bombed (outside of left+right controller/TAS hacks, which is another story altogether), and standing too close to the explosion will kill, natch. There are a few rocks in this run where one would usually scroll the screen, either while getting as close to the rock as possible, or when moving away for the explosion. It is actually never necessary to scroll the screen in either situation, as demonstrated here, which saves a few seconds.

Following this is the first death skip -- note jumping over the air supply refill and coin, causing a respawn at the coin pickup to the left of the first rock once the blue key is collected. It is possible to skip the initial bag of money+coin and spawn at the elevator, but making the jump over the coin while not losing speed is difficult. It is also not necessary because of the geyser in stage 3.

In the next level down is the first star (random item) pickup. Luckily it is an extra life, and the only necessary one as previously mentioned. Quite a few restarts occurred after picking up this item!

A small note about the double elevators in this game, which you see underneath the blue key here -- the left platforms can be walked onto smoothly from adjacent platforms, but the right ones have a small gap, which you will fall through if you try to walk across. This is consistent for every elevator in the game.

Upon exiting this section I barely make it past the steam trap. This is a good measure for doing the previous section as fast as possible. Since the entire game is on a universal cycle/timer, there are a lot of little things like this that let you know where you're at time-wise, and also make running the game very binary. You might gain a few frames in a certain section, but there are always things you will have to wait on which regulate how much improvement you can actually make on a second-to-second basis.

The following mine cart section contains the second death skip, requiring a precise double jump over the coin next to the red key. This is also the only example of using the elevator as a spawn point.

Another rock bombing in which scrolling the screen is avoided; it will scroll if you walk right up against the rock.

In some runs, I would pick up the star to the right of the blue key if I didn't get an extra life on the star in stage 1, provided I did well. If neither gave an extra life, that was a definite restart.

The thrid death skip happens at the bridge here. Like the first one, it's possible to spawn further back than I did, but is not necessary because of the geyser in stage 3. You can also see the other useable item along with bombs, the flare, which is obviously used to 'scare' away bats so that you aren't as risk of being killed by their falling poop (please note that our spelunker is wearing a hard hat).

Next is the first rope section, and the fourth death skip. There's not much to say here, other than noting that this game is infamous for its ridiculous rope controls, amd that sections like this lead to many players' deaths.

Before the next section, another rock where you can avoid scrolling the screen if you don't walk too far to the right.

As if one rope section wasn't enough, here is another, even more difficult one, followed by the fifth and final death skip. Same as the skip following the mine cart section in stage 1, it requires a precise double jump to avoid the coin next to the red key.

Here is the geyser I made reference to throughout these notes, and somewhat the bane of my existence as far as running this game goes. There is no way to skip this part, which means any improvement before this point has to be at least enough to reach the geyser on an earlier cycle, and each cycle takes 14 seconds. Since I make it here just in time on this run, for there is be any improvement at all, my run up to this point would have to be improved by 14 seconds to actually gain any time. Any less, and the difference in time is spent waiting for the geyser.

A fairly tight jump here to the first red key and back, catching the rope is necessary to make it.

The rest of the stage is pretty self-explanatory, no special tricks here.

As for improvement to this run, it would only be possible via collecting the special speed-up item, which is one of four random 'hidden' items you can collect by jumping in specific places in the game. This would be quite the task, and my condolences go out to anyone who would attempt something so silly. Maybe I'll try it myself in due time, ha!