Released in the US by NEC on the Turbografx 16, Splatterhouse is an arcade home port which some credit with starting the ball rolling for the ESRB rating system. Players take control of Rick, an ordinary guy granted superhuman strength from a possessed mask. With his new strength, Rick charges into a haunted mansion to save his girlfriend by kicking, punching, and bludgeoning every single otherworldly horror that gets in his way. 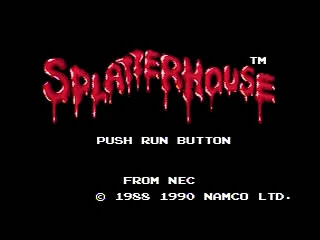 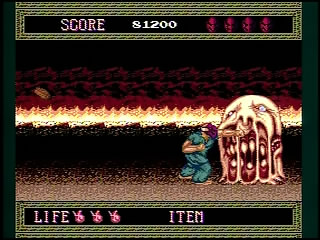 Runs on the TurboGrafx-16 NTSC-US version of Splatterhouse:

Thanks are in order before talking about this run.

So, due to the various new finds in the arcade version of Splatterhouse, I ended up testing them on this version just out of curiosity, and mostly all of them work! However they are somehow more difficult to pull off in this version, which is kind of ironic considering this version is easier by FAR to beat casually when compared to the arcade game.

As another side note, TG16 games seem to run at a slower framerate than 29.97, so due to this, the timing on the video file is not accurate to real time (framecount reports a 13:02 despite being a 13:02). Thankfully I streamed this attempt which reveals what the timing should have been around.

Stage I: The position of the puke is a little random to where it has a 2/3 chance of hitting you if you don't stop. Me stopping lowers the probability of getting damaged to 1/3. Still had to wait on that one section because that puke is pretty irritating.

Stage II: My last run had a stupidly lucky knife fight that was basically a fluke. I could not recreate it for the life of me, so I adapted the arcade strategy to the poltergeist room, but in reverse order. You also need a particular pattern in this version so while you kick one knife across the room, the other one doesn't cross over and hit you. Also for some reason if you slide the painting on the left side, it is easier to land the quick kill on arcade but harder on TG16; right side is easier on TG16 & harder on arcade. Funny how that worked out.

Stage III: Ok, this stage is completely overhauled. This is the first Splatterhouse route for stage 3 I have ever done without the dual shotgun trick! Completely pass over it to fit in more slides at the start, then over the gap, I have just enough speed to push the zombie back to where I can slide it. The rest of the stage is slides until I get the shotgun, then I slide into the boss, get damaged & drop the gun, pick it up, turn around and fire left while jumping. the jumps let me fire faster and propel me closer to the door without having to walk there, shortening the section after the boss. This saved like something over 3 seconds alone over the old run because I used to stop and shoot things over the gap to set up the double shotgun Biggy kill, but now it isn't a problem!

Stage IV: Autoscroller dance sequence initiated. I harpooned a bat just because I could.
The boss fight was a little weak cause got really bad spawn positions that I didn't want, but the fight is still a little faster than my old run, but this would probably where you could gain the most time over this run if you get amazing luck.

Stage V: This stage was so-so, despite me getting a gold split (that gold was a lie). Decent chair room, but got dumb luck on the first demon. I was able to damage boost through the 3rd demon off of 2nd demon's head, so that was somewhat lucky. The Jennifer fight went down perfect. For those that don't know, Jennifer has 3 phases in this fight, all of which have 6HP (I'll refer to her health like this: 6/6/6, with slashes separating phases). Now, slide kicks do 2 HP of damage instead of 1, and will force her against the wall and hit her twice. Now here's the kicker, if you get her HP to 1/6/6 THEN do a slide kick, instead of her HP reading 0/6/6, it's now 0/5/6. Now why is that important? Phases are separated by a 8 second cutscene with Jennifer transforming back into her normal self and saying "Help me!" then transforming back. Doing this effectively SKIPS that cutscene entirely! This fight lasts 8.775 seconds from when I gain control again to the score rolling over, which is my best time on this boss.

Stage VI: This stage sucks & is 100% random spawns, so you gotta just be incredibly familiar with what it will throw at you. One thing to keep in mind is to let the ones near the left end of the room do their thing. If they land off screen, you'll de-spawn them. Even when you finally get through this damn tunnel, this level will still most likely give you terrible spawns during the boss fight, which is the only part that matters in the speedrun. I can say without a shadow of a doubt that this was the best stage 6 boss I have had EVER in BOTH versions of this game. The boss cooperated SOOOOO WELL and I pulled off EVERY backward momentum slide & jumpkick. The boss died within 7 seconds of the scrolling stopping; I've never seen it die that fast. This stage saved like 6-7 seconds alone.

Stage VII: So, you can indeed slide through the boss like in the arcade version, but to link your slide into the standing punches is WAYYY more difficult than the arcade version. I don't like saying this just because I don't know for sure, but the window feels like it is frame perfect, and from all my fights with Mike Tyson on MTPO (fight requires on the order of 10-20 frame perfect hits), this feels very similar in its strictness. I managed to land exactly one cycle where I successfully get the standing punch after the slide, which is kind of all I really wanted out of this fight. I expected to get hit pretty much every cycle I slid into him, but that one was a little bonus. I had messed up one cycle a tiny bit that cost a fraction of a second, but aside from that, this was a decent fight.

So that is Turbo-Grafx 16 Splatterhouse. I might try sub 13 one day, but it would be incredibly brutal comparing to that stage 6 fight in future runs. I'm glad to see both the arcade version and the TG16 versions up on SDA with updated strategies, so I will probably leave these alone for a very long time. I hope you check out both runs, especially since both versions have a commentary track!