Released in March 2005, the third in the stealth-based series now gives far more freedom and options, a greater variety and range of moves, a monitor for the noise made along with the ambient noise of the environment, and a knife that was puzzlingly missing from previous arsenals. A complex plot worthy of the Tom Clancy endorsement follows Sam Fisher on the shadowy trail of a computer program capable of destroying America's infrastructure, should it fall into the wrong hands. 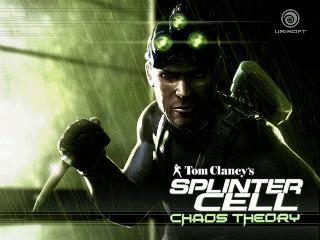 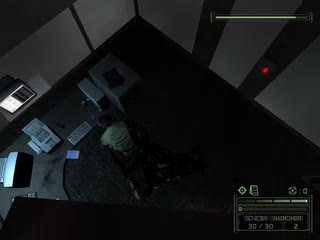 Getting 100% in Splinter Cell: Chaos Theory requires completing all Primary, Secondary and Opportunity Objectives, except Lambert cancels them during the mission. Bonus Objectives are "hidden" objectives, which nobody asks you to complete and don’t affect the rating.

The following indiscretions will lead into a point deduction; except for missed objectives multiple deductions per category are possible:

It’s faster to knock out the radio operator and search his cabinet instead of interrogating him, since the choking animation to knock somebody out after a grab is pretty slow. However in an any% run it’s faster to interrogate him.

If you enter Lacerda’s cabin in a certain way (pulled out EEV, not too far, not too fast) and go right back out, the game starts Lacerda’s conversation with the two guards with him, but seems not to realize you left the room.

If you leave now the area where you can still hear them (they won’t stop talking immediately, they will always finish their last sentence or at least a part it) and enter this area again, the game for some reason thinks you completed the "Find the name of Lacerda’s Panamanian contact" objective.

I did this once by accident and it took me a while to figure out what exactly triggered it.

The jump from the ladder down to the last crate requires pretty precise timing. If you jump too early it kills you, too late and you’ll land on the handrail.

I shot in the direction of the guard by the first authorization lock to alert the second guard nearby, since this guard will now open a keypad locked door and another door for me. But since he only heard my shot but never actually saw me, he didn’t identify me as an intruder.

This kind of manipulation only works in a few places, since in this case most guards will simply press a panic button nearby.

After hacking the last PC I didn't upload the fake e-mail right away and also didn't use the PC near the lockers just yet, since this would further delay the moment, I'm able to plant the bomb in the vault. Both triggers a conversation with Lambert and you can't plant the bomb during a conversation.

By jumping on the handrail instead of simply using the stairs I just avoid getting spotted by the first camera I tapped. The buzzing of the camera indicates it was just about to spot me.

Finding out who's in charge of that protection detail is a little trickier. Just a few guards will tell you, but only if you already obtained the first information.

The constant talking of Redding, Grim and Lambert makes all this even more difficult, since you can't interrogate guards while one of them is talking to you.

The trick to manipulate the conversation you´re supposed to listen to is similar to the one in Cargo Ship. I enter the area which triggers the conversation to start and start recording it with my EEV just for a second. Now I continue doing the other stuff I have to do, but for some reason the game thinks I'm still recording.

I use a gas grenade to kill Milan Nedich (even non-lethal weapons kill target persons in this game) and knock out all guards nearby. They all just run into the gas cloud at the same time so nobody can be a witness of what happened.

If you jump through the ceiling window down to the last microphone exactly in the moment the guard inside opens the door to investigate the situation, you’ll get away with it. He’s too "busy" opening the door to notice it.

You aren’t supposed to know the code for the elevator door. A special shout-out to Tigger77 for still discovering it by writing a program which tried out every possible combination for him, while he was recording. What an amazing effort!

Throwing a smoke grenade onto the launch pad also affects the area below it. This way I can easily get the abort codes without touching any of the guards in the launch control room.

There is a whole bunch of stuff to achieve in Seoul in order to reach the 100% rating.

Gas grenades are able to destroy "P3R’s" in a silent manner. But it’s still risky, since the uncontrollable rebounded grenade might still alert guards nearby.

Crawling to the end of the crawlspace to eavesdrop on Shetland’s meeting will let them for some reason identify you as an intruder. It seems to be some kind of bug, which can only be prevented by simply not crawling too far.

Getting undetected through the bomb section by the end of this mission is probably the hardest part in the game while going for a 100% rating. Guards are wearing gas masks and night vision.

After disarming the first bomb I can’t afford to knock out the first guard, because the two following guards will find him, even in dark places. Instead I let him walk all the way up the stairs to make up as much time as possible before luring him back down by whistling right before I climb up the handrail. This will give me enough time to disarm the second bomb and get to the third bomb by blocking the sight of the meanwhile three guards with a smoke grenade. But this still isn’t enough. So with the camera I placed before entering the room I create now a third distraction which eventually lets me end the mission unseen.

There are no Secondary or Opportunity Objectives in this mission. So it’s just about completing it undetected.

I started each mission off a quicksave to prevent the game from crashing due to a resolution/render changes which occurs while starting a mission and get interrupted by the recording software. This doesn’t affect the gameplay in any way.

Thanks to:
Radix for creating SDA
Mike for leading SDA in the right direction (Straight to world domination)
Nate for all the encoding stuff
All the other admins like dex and Enhasa for their work.
And all people on the forum for the community and making SDA to that was SDA is.

I started to work on this run as I was tired from Links Awakening I just played for fun to see how close I can get to the actual Time.
As I realized that I can even beat the times I work harder and got it. I cuted the time from 1:16:34 to 1:01:21 that's an improvement of 15:13.

I don't show the difficulty at the start of the mission but you can see (on the movement of the enemy's) that it IS expert.
The Reason is that my routes are hell risky and so I had mutch restarts and always getting back to main menu would just annoying.

I teaserd the tow guys by Morgenhold, it's faster and you safe changing your weapon one time.
To bypass the guards on my way I use the Flash Grenades with is faster than usp the light.
At the end I interrogate the guy to get the info above Maria Narzisa.

The tactic to take the tow guys in front of the engine room out is really risky sometimes the second guy turns around and shoots you down. The following jump is really cool IMO.
The tactic I use to enter the bridge is difficult to after I bash the door it happens very often that the Capitan just shoot me :-(.

Thanx to Exploding Gabbage for the new route witch improved my time by 58 sec.

To enter the front entrance you have to be zero alarms otherwise those doors just close and you have to go over the roof.
The alarm level 4 is needed to shorter the dialogs.

At the start I choose a really risky route to pas the guard's that only worked in one out of 10 tries but save some good seconds.
After entering the second building I take the guard out instead of going true the crawl tunnel with is faster too.
The rest of the level is just the same tactics.

I just run thru this Level ignoring all alarms security cameras or Lasers :-)

The improvements in this level are the Flash Grande to bypass the tow guys and some riskier running.

I hate this level and its defenitly beatable but for now I'm done with it good thing to all runners how will try it the code for the elevator is 1304
I found it with brutforcing the elevator.

Soul is a fucking hard Level its so frustanating if you shoot enemies and they just don't die.
Notable trick: The 2 Grenades who take 3 guards down.

Another Bad as Level.
To Note: The end is cool I take the tow guards down with one wall mine (Just shoot in the air and voila)

This level has some stupid waiting parts as the overhearing part and the elevator part also as Otomo talks a year with you at the end. The other parts are full of action and really cool.
This is my favorite part of the game so I'm proud that I could save 2mins and 35 sec out of this level.
Note: To open the retinascaner locked door I just pres rapidly space (Hacking Luck) it need some luck but it works well.

Overall I'm satisfied with this run with more pation and more luck maybe I could squeeze out 30-40 sec I think but now I had enough from Splinter Cell Chaos Theory and go back to Links Awakening.
If you want to comment on the run pleas post in the Verification thread or PM me.
If you want to sow this run on another site than SDA please ask for permission.
I hope you like the run see ya!! (Soon I hope)
Tigger77