Spy vs. Spy initially started out as a comic strip back in 1961 for Mad Magazine, written by Antonia Prohias, then later made for numerous game consoles in the mid to late 1980s. The strip/game features two spies - White Spy and Black Spy - who always try to one-up each other using various booby traps. The 1988 NES release is probably the most well known of all of the various releases, which feature the two spies going through 8 embassy levels, getting a suitcase and 4 items, and then escaping on an airplane, leaving the other spy to a terrible fate. Snicker. 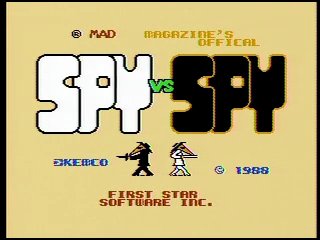 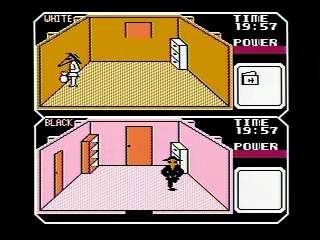 Speed run rules:
* Individual Levels
* VS COM
* Suffers death to save time (Level 5)
* Gets away on an airplane (All Levels)

In 2006 I finished this run.
But it was deemed too boring for this site.
I posted these on YouTube just for fun.
And everybody said that they were alright.

And there these videos sat for 3 years.
Looking for a little love and respect.
But none was had there. All there were was tears.
It's such a rare game - what did I expect?

But TASVideos we are not!
And this is a very lame excuse for
Rejecting this run. Alas, a weak spot;
Let's see that rejector to the far door!

Watch these 8 levels, praised in sonnet form.
And enjoy the laughter; that is the norm.

This run is Copyright (C) 2009 Nicholas "Sir VG" Hoppe and IMAMYTH Colosseum (http://www.imamyth.com/ and http://www.youtube.com/user/SirVG) and is allowed for downloading and private viewing. Permissions for hosting this run have been granted to Radix and Speed Demos Archive. Public viewing of this run is prohibited without prior permission from the creator. The selling or distribution of this run for profit in any way, shape, or form including (but not limited to) selling on eBay and television for profit is prohibited without prior permission from the author. Video hosting sites (i.e. YouTube, etc) may host this video in part or in full, as long as full permission is granted by the author. Any violation of the above listed may result in legal action. Spy vs Spy is Copyright (C) 1988 Kemco.