Star Ocean: Till the End of Time was released in August of 2004 after numerous delays befitting its subtitle. tri-Ace put this time to good use, creating a deep epic spanning two DVDs, featuring a remarkably action-filled yet strategic combat system. The story follows a young man named Fayt. After being forced to evacuate from the recreational planet of Hyda IV, he must fend for himself on an underdeveloped world. But that's only the beginning of his journey... 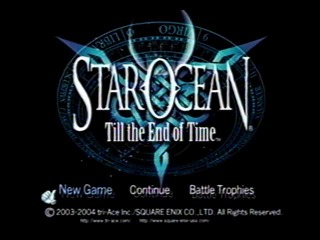 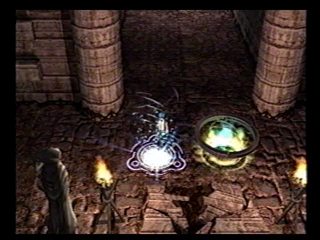 My first attempt in this speedrun ending with a time of 4:59. My practice one which is posted on my Youtube was 3:59. However, I gotten even better and obtained of a time of 3:28. My time could be reduced by a bit because I remember having a few of those long loading times and some of the fights weren't optimized well. I shouldn't have gotten that many berries and the battles in disc two could have been shorter if I used Peppita in disc two. I might even do another one in the future but doesn't expect any attempts unless someone defeated my record. Even if it isn't defeated, I'm still willing to beat my old record one day if I'm motivated to do so.

I hope the person reading this will enjoy my speedrun.

Special thanks to Dragondarch for his old speedrun record. Also, I would like to thank the following from GameFAQs: Marty81, DexTepa, Enhasa, Ladyissoalluring, Velari, ArcadiaLegend, and EnigmaGamer for motivating me, providing some suggestions, and making my stay at GameFAQs an awesome place.

I would like to thank SDA for hosting my speedrun, nate and ballofsnow for helping with my encoding problem. I would also like to thank tri-Ace for making this game, Square-Enix for publishing, my friends, family, etc, and of course you for watching this.

I never thought of starting a 4D speedrun since I thought it wouldn't be possible. So why did I start it? I wasn't satisfied with a Galaxy Speedrun because it wasn't challenging enough and speedrunning 4D would be one of those insane challenges in my opinion. In this speedrun, I used Item Creation so I can easily plow through the game once I'm able to synthesize some Orichalcums. I didn't pick up any Ripe Berries because a 30% HP recovery is basically a one hit insurance. So here's the brief blog:

Also, I would like to thank my viewers on my YouTube who have been watching this speedrun (BradRY, Krelian89, triAceFan (aka tri-Ace_fanboy), etc.).

In addition, thanks to nate for allowing me to upload these huge files, ballofsnow for his help earlier on my other run, obviously SDA for hosting it, the makers of the knowledge board, and mike (that Mega man guy xD) for helping me through the process of verification.

Another thanks tri-Ace for making this game, Square-Enix for publishing, my friends, family, etc, and of course you for watching this.