Released in June 2003, Star Trek: Elite Force II is a first-person shooter starring the Hazard Team, led by Lieutenant Munro. It features all of the necessary parts of a Star Trek episode: the Borg, a love affair with an alien, and mass-produced controllable alien antagonists called the Exomorphs. The lieutenant must chase down the master control center for the exomorphs (located, of course, in the Romulan neutral zone) and flick the magic button. 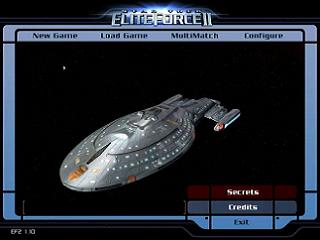 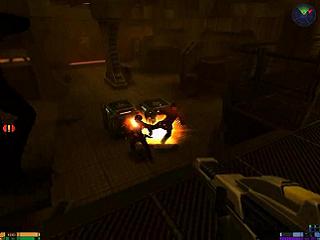 Id like to thank Reaver who started a speedrun for this game in 2008 and every verifier. Thanks also to the people who run this wonderful site.

A few things before i start:

This project arose out of boredom at a time when no good game was released (early August 2011). It was played on version 1.1 and took me about a week.

Most bossfights went pretty bad because i was always out of fking ammo and then had to use my phaser which is just ridiculous, i mean this
was played on normal difficulty after all.

I got stuck a lot - sometimes in a door or a chair, sometimes even in the ground. I blame the game for this, even though its actually my fault.

Modulating puzzles took me some time and had minor mistakes in them, thats mostly because they are the only random puzzles in the game.

During this run i found out that you can actually put split fraps segments together with VirtualDub, this is why in the first half of the run there
might be short quality decreases at some points and that also explains the few sound hiccups. (Those are fraps segments that i put together manually
with videopad before i appended everything to one file.)

Everytime i went to Korban in the armory i moved around the panel to talk to him which was unnecessary because you can just look at him and press use.
The last time i got there i didnt make that mistake, thats when i found about it. I lost about 10 seconds because of this...

I also could have reduced the amount of segments to maybe less than 50 segments, but oh well...

Being aware of these mistakes, i put this out there: this game cant be beaten under 1:50 unless someone finds a gamebreaking glitch or a major shortcut.
If this is complete bs and you can prove me wrong, you may kick me in the nuts and ban me from the internet :)

Luckily you can skip the tutorial and the prologue. Im not too happy with the first mission because of all the minor jumping mistakes, the modulation
puzzles and the bossfight but then again i still got out of there in like 11 minutes and the run only gets better from then on.

After the cutscene i go to the elevator at the end of the floor, theres another one right behind me but i cant use that one until they are done with
talking. I talk to everyone i have to and i got stuck once outside trying to bunnyhop, but that wasnt too bad. At the end of the dialogue, every answer
seems to have the same effect but i didnt want to dump her cuz i think shes kinda hot, so i chose the nicest answer :]

This mission is pretty boring since you just walk around and do puzzles mostly. Nothing fancy happened, i bounced off that one ladder three times which
was really weird. There is one segment in it that i could have saved: the last 40 seconds or so where i have to rescue Chell, that didnt need an extra
segment but now its too late. In the information-gathering mission after that i made a mistake: i went to the right elevator instead of just going to
the left one which is just next to me, that cost me about 3 seconds.

One of the most annoying levels in the entire game. At the beginning i jump on that lamp and then into the flames, this is like the first real shortcut
in the game, you usually have to wait there for like 5 seconds until the platform lowers. In the next room, before i do that big routing puzzle i go
outside and shoot the approaching aliens, i have to do that because they would enter the room and interrupt me otherwise. Later i let Avak'Stas die
to proceed faster, and youll get the arc gun later anyway for some reason. In retrospect i think i could have shot at him too when the aliens
attacked him to make him die faster, but before they appear you definitely cant hurt him with guns. The rest of this level is just more shooting aliens
and protecting retards from nearly infinite alien hordes.

This included the second most annoying segment of the run (from the main gate at Drull Ruins to the Queen Bug), there are a couple of autosaves
inbetween but i really wanted to do it one attempt. That strafejump later to the lower platform behind the laser barrier is probably the best
shortcut in this run, it saves about 25 seconds. The rest of this mission is pretty much just shooting turrets and sealing gas leaks with your phaser
until you find Dr. Krindo.

In the information-gathering mission on the Enterprise (befor Mission 6 starts) i decide do go with Kleeya to Stellar Cartography because this is a
skippable cutscene and faster than talking to Telsia after that. Then i also have to go to the bridge and the armory again. In the mission itself
you have to help everyone of your crew out - even Picard later. Theres not much to skip there. When you fight of the attackers that beam in and try
to sabotage the core you sometimes have to enter a code after youre done with that big routing puzzle - that didnt happen so everything was good.
The Enterprise Hull was my only concern for this run because i had the some problem as many others: Once i jumped into the air i never came back down
because of a bug that didnt reset the gravity. On my first attempt while recording it actually worked so i was happy as hell and didnt try this part
again (maybe it has something to do with fraps?) That fight against the spaceship with the cannon could have been faster since i only had to shoot
the ship three times in all of my earlier attempts, but whatever i did now, i always had to hit it four times.

Probably the third most annoying segment. Billions of aliens in your way and a weak Attrexian you have to escort and keep alive. Only to be
followed by the most annoying part in the whole run: the one where you start in the sewers (from the beginning to the part where you climb
up the ladder and exit the sewers). This took me a couple of hours. Theres one more nice shortcut included where i simply jump over that
collapsing bridge when im about to reunite with my crew (you usually fall down, fight a big alien and then use the tricorder on a panel to
lower a ladder), saves about 20 seconds. The rest is pretty much just straight forward, the factory part was also pretty annoying.

This one has no information-gathering on the Enterprise inbetween so you go right away from one planet to another. I didnt like the fact that
i got stuck on the ground while strafejumping as hell, but then the time was 1 second faster than all the other tries so i kept it. One more
shortcut: jumping over the bridge is not only nasty, but also saves about 15 seconds. And seriously: who thaught this gap would be a distance
for a game based on the Quake 3 Engine? After that Krindo arrests me just to let me go again. (If you choose the other answer in the dialogue
the mission actually fails and the game says: "Choose your answers more carefully!") I got a nice boost by that big alien and a few
seconds later i jump just through the explosion/trigger on the bridge which saves time again. The bossfight against the stalker was pretty bad
again, mostly because im simply out of ammo - again.

On the Enterprise i choose to just talk to Telsia since her conversation is a skippable cutscene. The Klingon Base was pretty annoying because
of the endless conversations with Omag and the chase after that. The Klingon boss can loose health quickly by activating the fire behind him at
the right time but trying to do that takes more luck and time than just killing him the ordinary way. After that you have to talk to Omag again,
this time on the Enterprise in a cell. I figured out the fastest way until you can charge him with bribery so i knew exactly which answers i had
to pick. After that youll get disguised as a Romulan for the next mission.

Thank God the door codes arent random so i could just write them down on and save some time. Fighting that Romulan Informant took some
time again since shes really quick and hard to find, oh, and because i suck. On the Enterprise later i just talk to Telsia again because its faster.

The last mission is a giant pain in the ass. I mean seriously, more powerful enemies please! Its also way too dark in the mines, i couldnt even
find a way out on my first playthrough. There are plenty of really powerful and big aliens on the way to the final boss and pretty much
all of them have to be killed. The first part of the final boss fight was pretty quick because i send some rockets over to him and then gave
him the final shot with the sniper. The second part could have been faster, the gatling gun seems to be the best choice against him.
And in Munros words: "hes just another bug" :)
That is all, hf.