Star Wars: Starfighter, released long long ago on February 19, 2001, happens to be LucasArts's first title for the PS2. Amidst the myriad hit (and miss) Star Wars games, Starfighter held its ground as a solid arcade-style space shooter. Rhys Dallows and unlikely allies, Vana, and Nym blast through the Trade Federation (with 3 uniquely armed ships and 6 degrees of freedom) in a previously untold story set in the timeframe of Episode I. The game was also released for PC and as a special edition for X-Box, and was even followed by a wonderful sequel, Jedi Starfighter. 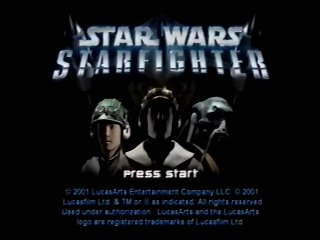 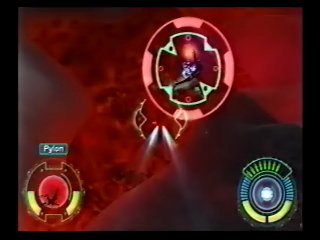 Thanks to Nate for instilling my VHS run with digital beauty. Thanks also to Mike Uyama, DJGrenola, and of course Radix for all your awesome work! SDA wouldn't be what it is without them.

Here's the Forum Topic. Thanks to Plagnus for some feedback, and hopefully next time I'll run a less obscure game!

Well, there was a request for more Star Wars games on SDA. In response to that request and with my former experience as the Star Fox 64 runner, I bring you a run on Star Wars: Starfighter! Yeah! What!? You've never heard of it? Well, I'll have you know it wasn't so mediocre as people seem to think. Ok, yeah it was! The best treatment it got though was to have a sequel made, Jedi Starfighter, which is a much better game with more depth to it. Unfortunately I think all of the Starfighter games have been lost in obscurity. Well not anymore! I hope you enjoy the run!

The lever timer in this game has a tendency to be glitchy. I've gotten times of 0:02 and 127:XX before for example. I've noticed this on levels 1, 3, 7, 9, and 14 I think. I'm guessing that the CD skips or something causing the timer to reset at some point. Sometimes it's predictable. I got 0:02 several times on Mission 9, and if I get below 2:10 on Level 1, 5 seconds are subtracted from the displayed time. If any individual level runs are done in the future timing must be done according to the video time, NOT the in-game timer.

I was a bit lazy with these, but I don't think the game really warrants in-depth level comments. I'm ready and willing to answer any questions or hear any feedback in the forum topic or by private message.

So basically I was very satisfied with this run. I'd say it's definitely beatable, but that it would take a level of attention and effort that I doubt this game is really worth. I'm now playing Jedi Starfighter, which is AWESOME compared to this game. In light of a truly superior space shooter I'll go ahead and admit that Star Wars: Starfighter is a rather mediocre game. It was fun while it lasted. I'm not sure what I might run next. I didn't expect to run anything after Star Fox 64, but here I am again. On my "list" are Descent 2, Jedi Starfighter, and Star Wars: Rogue Squadron. I started working on Rogue Squadron, but it's a very difficult game to master, so I'm not sure anymore. Until next time I hope you enjoy this run and if you haven't seen them, check out my Star Fox 64 runs, which are really much better than this! Thanks for reading my comments!

This run is the property of Brett Ables. I also go by 'flutefreak7' and 'psonar' on the internet and I may be reached in the forum for this game or by private message here on SDA.