Starcom is a top-down space combat flash game. It was created by Kevin Lin and released on June 10, 2009. 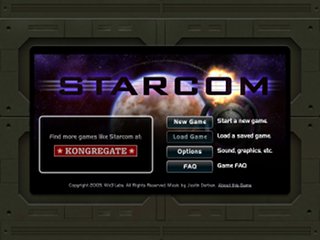 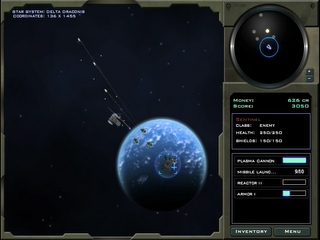 Segment 1:
The main challenge in this segment is aiming the turret. The turret is perfectly accurate, but the enemies are very small targets and their relative velocity can change quickly since they have no inertia. By estimating the angle to the enemy using the radar, I'm able to hit the Strike Fighter from off screen and take it out on its first pass. That lets me get the Turbo Thruster very quickly. Unfortunately, the dialog box prevents me from taking out the two Drones before reaching the second enemy station. Amazingly, I kill them both off screen before my turret overheats, so this doesn't cost any more time than if I had stopped to kill them before picking up the thruster. At the Starbase, I upgrade my turret damage to speed up the fighting in the next two segments and save the rest of my money for reactor II.

Segment 2:
You don't actually have to kill the Sentinel, but I need a bit more money. This is the last time I kill enemies for money though. From now on I can rely on mission rewards. Reactor II increases my thrust a little (which increases maximum speed) and my energy capacity and recovery (which will be useful once I get the Jump Drive).

Segment 3:
First stop is the Missile Frigate that drops the Missile Launcher. It's not too difficult to chase it and kill it with the turret, but it is tricky to get it to circle around and then break off and run in the direction I want to go. This fight went very well. I go for the Jump Drive next, before I use up all my energy. It's possible to conserve energy by toggling the Turbo Thruster on and off, but I found in testing that the time saved by jumping farther was, at best, equal to the time lost from traveling more slowly (stupid space friction). It's easy to fly full speed through the minefield if you get into one of the clear lanes. I'm too busy killing the Supply Station and getting the drive to shoot down mines, so I take a bunch of damage. I use the rest of my energy to jump out past the mines. Fortunately, being out of energy doesn't stop the Turbo Thruster from working. Next I go for the Shields. They're too weak and slow charging to be much good in general, but they save my life on the way out. I get lucky with high missile damage and make short work of the shielded Sentinel. I kill the Missile Frigate, but miss picking up its missiles and have to go back, costing a few seconds and very nearly letting the fighters kill me. Still, this is by far the longest segment and the rest went well, so this was my best attempt. This Frigate drops 1-4 missiles, so I think there's a 50% chance of getting enough to replace the 3 I used. I return with the 3 items, opening the new Warp Nexus. The mission reward lets me afford Reactor III for the next mission.

Segment 4:
You don't have to kill anything for this mission, so I just jump straight back to the Starbase. This earns me 15000 credits and unlocks some new items. The important one for a speedrun is Warp Computer, which reduces the energy required to jump. I also upgrade my turret and buy Turbo Fire and Turret Coolant.

Segment 5:
I use this segment to manipulate a Yield Maximizer, which increases missile damage. This saves some missiles in the next segment and lots of time in the last segment. There are two enemies who can drop it and are on my way, but they're Baseships, so they'd take a lot of time and/or missiles to kill. Fortunately, there's a Sentinel near the Starbase which can drop any random artifact in the game. To conserve missiles, I lure a couple mines on top of it and let them hit me. My jump back to the Starbase was a bit short, but with a 1 in about 35 chance of getting the right item and some tricky piloting in the segment, I was willing to accept it.

Segment 6:
To complete this mission, you need to kill the Baseship, Destroyer, Battlecruiser, and Sentinel and recover the artifact. You technically don't need to kill the fighters, but the mission triggers in this game are checked at a very low priority, so having enemies that have seen you in the system can delay them for an unpredictable amount of time. Running recording software makes this worse, so I have to kill the fighters from the Baseship. I made sure to get the maximum number of missiles (5) from the Battlecruiser. Just before I jump into sight range of the enemies near the Nexus, the Prometheus calls me and gives me credits, a Priceless Artifact, and the Havoc point defense system. Havoc is practically useless, so I made sure in the last two segments to fill all my item slots, causing it to be put into cargo. Otherwise, I would have had to manually uninstall something to make room for the items I need. I max out my turret damage and Turbo Fire for the next segment.

Segment 7:
I have to travel a long distance for this mission, so it's slightly faster to leave the Turbo Thruster off until I run out of energy. Jumping to a far away target that doesn't appear on radar was tricky, but at least it's in the same place every time. In fact, you can go to Fornax Alpha and obtain the Chiralite Warheads before completing the previous mission, but that prevents this mission from completing properly, so the Warp Nexus to the boss fight never appears. I had planned to stop for missiles in Alpha Crucis and/or Fornax Beta, but I ended up not needing any more. Back at the Starbase, I max out Turret Coolant and (finally) upgrade my armor. I have just enough money for everything I need, since I calculated how much I would need from the random cash drops in the first two segments before I started.

Segment 8:
The first time I played this game, I sold my missile launcher because missiles weren't very good compared to my turret and I kept running out. Then I got to the final mission and discovered what a horrible mistake I'd made. Chiralite Warheads add a colossal amount of damage, maybe as much as 1000 max damage (weapons do considerably less than their maximum damage on average). So you wouldn't think that the extra 100 max damage from Yield Maximizer would make much difference. However, thanks to splash damage, each Station Platform is hit by multiple missiles. I found that the Yield Maximizer made the difference between each platform requiring a substantial amount of turret fire or a second missile to kill and being able to take out the station with one missile per platform. There are 15 Station Platforms, 3 Baseships, and 3 Battlecruisers in the system and they all have to be destroyed. I enter with 6 missiles and each Battlecruiser drops 5, so there are just enough for me to use one on each target. I get the missile fabricator early in the fight, but I can't really rely on it. In fact, on this attempt it doesn't generate any missiles until after I destroy all the non-fighter enemies. Similarly to segment 6, the victory message can appear without killing all the fighters, but it may take a very long time, especially when I'm recording. This time, though, my timing was good and I damaged or destroyed most of the fighters with missiles that hit the station, allowing me to mop them up quickly. I also managed to survive despite not picking up any armor.