Released in April 1998 by Blizzard, Starcraft is a wildly popular real time strategy game considered by many to be one of the best multiplayer games ever. Its single player is driven by a series of campaign-style missions following the interactions of the three alien races. The primary protagonists are the Zerg, a race of insectoids that overwhelm planets and incorporate the strongest species into their fold. The wise yet stubborn Protoss are the most technologically advanced and wield powerful psi forces in combat. The Terran are the scum of humanity that was shipped away from the earth eons ago -- they fight amongst themselves as much as with alien invaders. 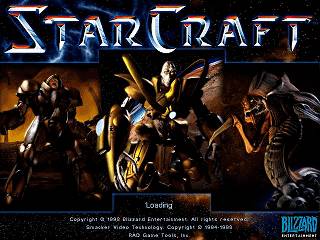 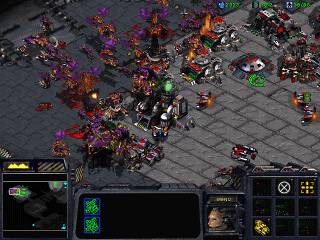 I made this a little more interesting and eradicated the zerg base. You may be asking how I knocked 4 seconds off this "fixed time" mission. Starcraft uses a trigger system to make events happen. There is a trigger to start the countdown, a trigger that announces the dropships at the end, a trigger to end the scenario in victory, etc. Well, Starcraft checks the triggers once every 2 seconds, and not instantly, so this is why you sometimes get a delay at the end.

Two seconds were saved from my previous run by building the Supply Depots earlier. Normally you would not have 100 gas by the time they finish, but I discovered a neat micro trick that makes the SCVs harvest faster.

When placing the second Barracks on top of the Command Center the construction starts immediately, which easily saved me one second from my prevous run. Getting that extra second for a time of 2:26 required perfect execution however, as you can see the Marines pretty much finish at the same time.

The time should really have been one minute blank, but StarCraft did not want it to be. A Firebat accidentally blew up with the first Spider Mine, but other than that, all units survived which allowed for a quick destruction of the Infested Command Center. Sub-1 minute is possible if you perfect the first battle and keep every unit alive. I am not sure the first Spider Mine is needed either. Version 1.16.1.

You need to make Raynor run in linear paths, or he will run left and right a lot which slows him down. Smooth movements are possible by right-clicking close to him. An easy mission, but also annoying since the opening times of the doors varies. Version 1.16.1.

Looking at my previous run I noticed that I had an abundance of minerals when building the Factory, so I got it out a little faster by building the Refinery as soon as possible. The other seconds just came from fine-tuning the strategy and by finding out that waiting for the final transmission before pressing escape will actually take you to the Victory screen immediately. There is one second to save in the beginning if you can get the SCVs to the minerals faster.

I knew the path directly to the right was the optimal one, but did not think the SCV would survive all the enemy units there. Turns out it does now and then thanks to Kerrigan. I have got 26 seconds blank, so 0:25 is definitely possible, although you need to be lucky in the end.

Compared to my previous run I am using a better placement for the Command Center (economically speaking), which means I can focus on starting the construction of the buildings as soon as possible. If it was not for the slow Factory (I pressed F/click too fast for the game to register the keys) this run would have been perfect, but as it stands 5:58 is definitely possible.

Thanks to two invincible Drones you can let the Zerglings destroy everything without taking damage. The only units you need to kill are 7-8 Marines and usually a few Goliaths, although in this run I did not have to kill any besides the one at the Starport. I believe this is the best build order and it can be done ~15 seconds faster with better micro and an earlier Hydralisk Den.

This mission is annoying. Not because of the teleportation, but because there is only a ~5% chance that the Victory screen will pop-up after actually teleporting. Apparently the Drone turns into a Hatchery so fast that the Chrysalis returns to its original position before the game is able to register it. Unfortunately it seems completely random.

I would like to thank Spider-Waffle for this strategy. It is pretty hard to pull off but it can still be improved by microing Kerrigan in certain spots where she tends to get stuck.

With an invincible Drone you can make a quick proxy Hatchery, and another Drone helps killing the Dragoons and the Reaver easier. The third is not really necessary, but used in this run. You need around 10 Hydralisks to take down the stream of incoming enemy units as well as Scouts. Afterwards, Zerglings should be the focus as they quickly take down the remaining buildings. Even though Overlord transport takes longer to research pre-1.04, it was finished one minute earlier than needed.

This mission is the toughest of all Zerg missions. There are just so many buildings you need to kill, including tons of Sunken and Spore Colonies, and the enemy AI keeps reinforcing with Hydralisks. I have come to the conclusion that pure Zerglings is the best strategy on this map. There are not that many enemy air units, so they can be taken down by your initial Hydralisks/Mutalisks. Overlord transport is needed to finish off isolated buildings. The time could be improved by killing the Mutalisk at the eastern base and letting Zerglings attack from both directions.

The invincible Drone glitch is handy here. Also this is on version 1.01 due to the Photon Cannons doing less damage to Kerrigan.

A teleporting Drone is used to quickly reach the crystal and start the countdown. The rest of the mission is just me making tons of invincible Drones to keep enemy units at bay, while setting up a Nydus Canal which quickly takes the Drone back to the base again.

You need to take down the temple for the crystal to appear in your base, then you need to bring it back to the beacon. Bringing it back is easy with the teleporting Drone glitch, but keeping units alive at the temple is hard even with invincible Drones.

This is on version 1.03 due to lower Sunken Colony damage, although it is probably faster to run it on a higher version. aresake was entering the Zerg base through the right ramp which is a bit slower than using the left one, since you do not have to deal with the Mutalisks there and you also have a wider area to micro your troops.

In ballofsnow's run he used an interesting mass suicidal strategy to build Gateways close to the Cerebrate. I found out that due to the significantly less damage of the Sunken Colonies in version 1.03, it was possible to get to that destination with only one Probe. This is much harder to pull off though, plus you have to fend off two Zerglings and two Hydralisks in your base with only Probes (which went terrible in this run). Also the cost of Dragoons is higher so there is no point in building more than two Gateways. This is a good run to improve upon though, plus a Zealot managed to survive which does not happen very often and made it possible to commence the attack earlier.

Out of all the Terran/Protoss missions, this was actually the hardest to improve. I tested many different builds including a fast expansion into five Gateways which clocked around nine minutes as well as mass speedlots in version 1.03 which would finish in about eight minutes, but in the end I decided that aresake's strategy was the best. You really need that early Gateway to take down white, also it is not possible to lure out the Hydralisks in pre-1.04 due to the different AI. This strategy needs a lot more fine-tuning though, I really could have made four proxy Gateways instead of three to name one thing.

SCP04 - The Hunt for Tassadar

Thanks to aresake for the neat trick in preventing the red Zerg from appearing. This is just the same strategy but in version 1.03 for lower Sunken Colony damage, some better micro plus I started moving Tassadar as soon as I got control over him.

A short and easy mission. I took a slightly different and more direct route than in the previous run. Other than that it was just better executed.

You need an extreme amount of luck getting all five templars to the Nexus alive. The Zealots were abandoned because they are interfering with the templars, so I used hallucinated Scouts as meat shields instead. Too bad I did not let Zeratul attack the Nexus immediately, it would probably have destroyed it a second faster.

SCP08 - The Trial of Tassadar

I am using a refined version of Spider-Waffle's strategy, only attacking with four Reavers plus Raynor as well as not upgrading Scarab damage. I think this is the minimum required. Possibly you could replace one Reaver with Fenix and a Dragoon. I also decided to proxy the buildings to commence the attack earlier. This mission would have been faster pre-1.04 but due to the AI differences the Carrier bate trick does not work.

This mission saw a large improvement thanks to version 1.03 which has lower Sunken Colony damage. It made it possible to use a suicidal strategy with your initial group of units. This was my first serious run, and although I did not make that many more attempts, I still think it is pretty decent.

Uses the CC slide on version 1.04 to ultimately get the nukes out faster. It is very similar to T10 except the economy part is easier, but the ending is a lot harder to pull off. Thanks to Spider-Waffle for figuring it out, it is quite brilliant and I would never have thought of it on my own.