The ubiquitous expansion, Brood War, was released in November 1998, the same year as Starcraft. Blizzard introduced more than half a dozen new units along with features both aesthetic and gameplay related. Following the death of the Overmind, Kerrigan assumes the mantle of Queen of the Zerg and attempts to ally the remaining Protoss and Terran forces in order to fight a powerful invading force sent from Earth. Has Kerrigan changed heart or is it a ploy? Will the psi-disrupter pull the Zerg apart? Some answers are best left to the playing. 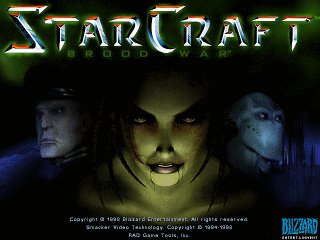 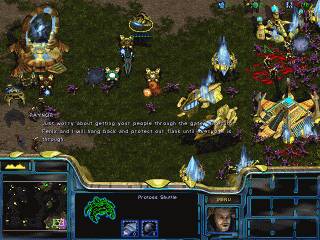 Zeratul is on the move constantly and the pathing is perfect except for a pathing error right before discovering the main army, plus Zeratul getting blocked by the Archon shortly after. This results in a 11 second improvement in real-time, plus 8 seconds from the pause glitch.

Pretty much the same strategy as aresake used in the previous run, with some slight changes. I research Dragoon range, and put up an extra Gateway instead of a Shield Battery. This saves 24 seconds in real-time, plus 70 seconds from the pause glitch.

BWP03 - Legacy of the Xel'Naga

Thanks to aresake for the strategy. Pre-1.08 the Corsair's Disruption Web lasts forever, which makes things a little easier. Also the build time of Dragoons is slightly faster. Most time however was saved from destroying less buildings and instead focusing on the Cerebrates. In reality my run is only 17 seconds faster than the previous record, but due to aresake's excessive pausing, another 13 seconds were gained.

The Dragoon that leaves the base will trigger an enemy patrol that moves down the ramp, as seen when Kerrigan is waiting for the two Goliaths to walk past her. There is nothing you can do about this. Normally though there is a Goliath interfering with you at the end, but sometimes it is nowhere to be seen (as in this run), which means you can move Kerrigan straight down to the crystal. 5 seconds saved in real-time plus 16 seconds from the pause glitch.

BWP05 - The Battle of Braxis

I destroyed the second generator purely with my air units. Not only is it faster, but it also allows you to use your ground troops to finish off the third and fourth generator without waiting for reinforcements. Actually getting the units to the upper-right reactor is a bitch though. I waited with this attack until I had unloaded the Zealots, but you could really do both simultaneously for a faster time. This requires the Shuttle with the Zealots to be at full health though, which was not the case in this run. The ending could also be faster by attacking the final generator with the Scouts.

Thanks to Spider-Waffle for the strategy. A floating Drone will, if lucky, manage to snea... erm, float past all the Zerg defenses and get to the beacon in no time. So much for being Protoss.

Two seconds could be seen as a lame improvement, but in reality the run is only 38 seconds long. A more dangerous but faster route is taken with the Shuttle, resulting in the time saved.

You want to start the countdown as fast as possible. There are some Sunken Colonies and units around the temple that you need to get rid of, but the problem is not to get Zeratul and Artanis to the beacon quickly enough; when the countdown starts, waves of enemy units will randomly attack your two bases as well as the temple, so you need some time to build up your economy/defenses. As pointed out by aresake, High Templars and Photon Cannons are the only option here. Together with luck and the stronger storms in pre-1.08, I managed to start the countdown 74 seconds faster while still surviving. Perfect pause glitching saved another 24 seconds of this mission worthy of ending the Protoss campaign.

I really like this strategy, which is ultimately limited by obtaining Siege Mode and firing 14 shots at the enemy CC. I've optimized aresake's run for a 6 second improvement with better SCV pathing, the CC glitch to harvest gas earlier, and getting the Siege Tanks into position earlier so that they can siege up immediately when the research is complete.

I only get 9 Battlecruisers here instead of 10 and play a bit riskier. Also pause glitching a long transmission. In the final battle you have to lose a Battlecruiser or the enemy will chase it down so you won't be able to use it anyway. Improved by 1 minute and 15 seconds.

Same genius strategy as ballofsnow used, just optimized by building one less SCV and Dropship. The keyword being just since it's 43 seconds faster and took a lot of attempts to get the ending right, Siege Mode was just two seconds off so the timing was pretty damn good.

This mission is the fastest of the two in the only branched path in the game. I just had more units in the Command Center fight and was able to improve the time by 13 seconds.

A slight improvement of 3 seconds in this quick mission. The Archon does not derp around like that every time, not sure why it happens but I'm not complaining.

Saved 59 seconds here thanks to a skip as well as playing more ballsy after the lengthy transmissions. Normally you have to activate the blue beacon with a Marine and wait for transmissions etc but by killing off all of them I can go through the door directly with Duran. Pause glitches in the middle of the run as well as at the very end makes for a very boring mission but I think I managed pretty well. Well, actually, it would have been boring if not for the epic Ghost to Ghost, Duran to Stukov confrontation. Insane plot twist indeed.

I optimized the build order and cut a Medic to get the transportation underway sooner. I also took a shorter path with the Dropships and paused during the beacon activation sounds that plays when a Medic enters them to save additional time, resulting in a 21 second improvement.

I take a shorter path to the Ultralisk past a Bunker to save 12 seconds.

It's a race to 10 000 minerals. Oh the fun. I tested a lot of different build orders and Drone saturation and I found this to be the sweet spot, making one less Overlord and eight less Drones than the previous record. I'm also skipping the Spawning Pool and Sunken Colonies so army management is important, you need a bit of luck in the end to make the enemy units attack in good places. Lost a few Drones unfortunately but it still ended up being 56 seconds faster.

BWZ04 - The Liberation of Korhal

You start with a ton of minerals here so naturally you want to go Zerglings with some Hydralisk support to take out air units and Siege Tanks on high ground. This is the only mission where I use the Mobile Nydus Canal exit glitch, rallying all units to the Drone which is able to move forward. There are so many units you have to control in this mission that it gets a bit overwhelming, there's no point in using hotkeys since the units will die quickly anyway. Improved by 1 minute and 26 seconds, a third of that comes from the pause glitch at the end.

In this mission you are introduced to Lurkers which also happens to allow for the most broken glitch in the expansion. When I evolve Zerlings into Mutalisks with the glitch they keep the upgrades which means they will move and attack faster. I get the resources back after evolving so you only need to gather around 1000 gas to be able to evolve groups of Zerglings efficiently. For the first six minutes the AI is frozen so you can go ahead and destroy the first two bases, but there's no point attacking the main bases since they'll rebuild everything. Improved by 1 minute and 32 seconds.

Ah... here's where the super mutas really shine. I get the speed upgrade and make enough super mutas to fly around in the enemy base and pick off the scientists. There are quite a few of them and they patrol in different places so you will need reinforcements. The Mutalisk micro went really well considering the scientists hitboxes are really small, and just when the genius Kerrigan finds out what the UED is up to, the mission is done. Improved by 4 minutes and 29 seconds.

Just faster Duran pathing and pause glitching at the end resulting in a 32 second improvement.

Ultimately you need to get over the Dark Templars to the Overmind when it dies or it will be reborn. Instead of going Ultralisk/Defiler like ballofsnow did I obviously exploited the super mutas glitch to make for a quick kill, 3 minutes and 59 seconds faster than the previous record.

Surprise, surprise! Another Zerg mission with super mutas. The key thing here is to not lose any unit early on, so you need to play a bit careful and bait the enemy units with the Guardians. Improved by 1 minute and 25 seconds.

To be honest, I had never seen this mission before (credit to Blizzard for hiding it so well). I copied Spider-Waffle's 0:57 strategy but only managed to get 0:58... until I hit the 0:55. It all comes down to how early the Dropship arrives - this time it arrived earlier than ever before. In fact it arrived so early it even turned around before I had the time to mind control it, which all in all means the mission could be 2-3 seconds faster. Still, I consider this one of my best runs. It may look short and easy, but it is actually a real pain to run. Hitting the pause glitch perfectly just makes it even more insane.

This is a very difficult strategy to execute because you have to use precise micromanagement in several places at once. I'm especially proud of the group of 8 marines and 2 medics, which singlehandedly lays waste to two zerg bases, with only one casualty near the very end.

After much testing, I do believe that this strategy (namely range-upgraded bunker vs. purple, tanks vs. red, and M&M vs. brown and orange) is the fastest possible. It could have been done faster; in my practice runs I was able to destroy either the left two hives or the right two, using disjoint sets of units, within about 5:20. However, because of the difficulty involved, I think it's pretty good that I lost only a few seconds to doing both at once!

This mission boils down to running a zergling through the map, avoiding various traps along the way. If you do it fast enough, the enemy will not have enough time to destroy your hives.

Actually, if you examine the minimap carefully, you'll see that one of the hives was destroyed at the very end; however, due to the way the Starcraft trigger system works, the fact that the victory conditions were met at nearly the same time meant that the victory overrode the defeat.