Akin to Elite, this 1986 space exploration game broke new boundaries in immersiveness and technological advancement. In it, the vestiges of the human race, having weathered out a radioactive cataclysm underground on planet Arth, come to light in time to find another, far more dire situation staring them right in the eye. This isn't immediately obvious, though, since the game weaves its narrative seamlessly into the proceedings of normal gameplay: tricking out a ship, setting sail for nearby planets and stars, extracting minerals etc. while making friends and enemies amongst the several other starfaring races. 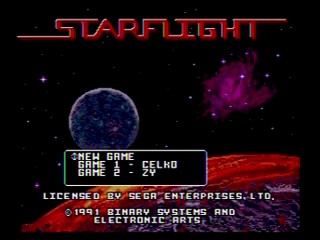 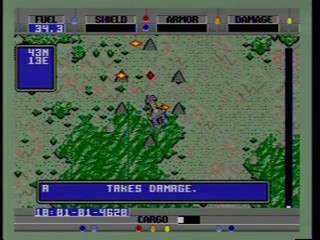 I've found that purchasing two cargo bays instead of selling level 1 engine for level 4 engines is more reliable and requires less inputs. I also take a worm hole warp that the TAS doesn't, which seems faster and saves on fuel.

System 143, 115 | Planet 1 -- Black Egg landing site is N28 E3 for fastest drop and go
System 132, 165 | Planet 1 -- Crystal Orb site is about N46 E13, although picking up enough fuel for ~36 units is necessary; check fuel as landing
System 192, 152 | Planet 1 -- Crystal Planet landing site N47 E45-46; don't land on one of the three pyramids in a row. It will trigger a long dialogue text that's unnecessary . Drop the egg near the diamond structure. Release the A button ASAP after exiting the planet; holding it down delays the final explosion scene from loading.

- RNG is huge in this game. From planet locations around the solar system as you enter, to encounter luck and fuel pickups, and finally orbiting luck, it's possible to get worked over by 20+ seconds on each of these.

- Droids: Respond as quickly as possible, the delay before the first question is on some kind of timer, and missing an interval can cost a second or two. Answer 'Yes' to any number evenly divisible by 6, and 'No' to everything else. After all questions are answered, the encounter will end once the game registers the droid ship is off-screen. I've found flying up after the last question is the most reliable.

- Random encounters: Initiate communications, and then terminate right away. This should avoid dialogue if done correctly, and possibly end the encounter as soon as all alien ships are off-screen. I haven't found a consistent way to avoid all encounters.

- Orbiting planets: Again, I'm not sure what determines a successful orbit, but it seems turning in circles is effective. If anyone has better information on how to do this it'd help greatly as I'm currently relying on luck.