Released by Nintendo in 1990, Startropics is Fantasticola. 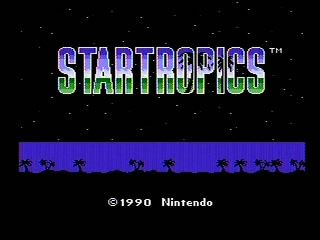 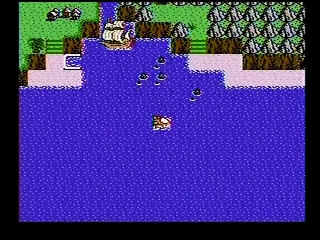 This run was revisited because my old time was beaten and I wanted it back.

NOTE: Timing ends when the end boss is defeated since there's a glitch that you can do to trigger the end photos. However, you have no control over that glitch for the first 5 seconds or so of the final boss and Zoda can act to cancel that glitch. That happened in this run, unfortunately, so the glitch didn't happen.

There are no major route changes to the game. A few rooms are changed a bit for optimization.

The biggest time saver is a better robot walker kill. There's an efficient, repeatable way to get the walker to not jump forward forcing you to shoot him several more times to get him to fall back into the pit. The overall time saved in the run is pretty well mimicked by the time saved on that particular boss.

Here are some game mechanic notes copied from my last submission:

Now here are some general notes for the run. Some enemies are static, some are dynamic. The important enemies, the ones that affect play the most, are the dynamic enemies. Some dynamic enemies include bonedogs, dodos, octopi, skulls and alien gunners. Some enemies that are partially dynamic are bats after their initial fixed movement, mummies when they hit a wall, hand and froppa (humanoid things spawning out of the water) spawning spots, and mud men spawning locations. Those things, and boss luck, are what really drive whether a run will be successful or not.

NPC movement in towns isn't completely random, which is different from most games of this time period. NPCs that move will generally move in the direction they're facing, unless they would be going outside their movement area. They will never move to the space behind them, only turn around. This slightly affects how I go about talking to them and moving around them.

And the note about the final boss glitch:

Scaryice found out what causes the ending boss glitch that cuts off the two minutes of time from killing the end boss to losing control of the character. This run does not have that glitch. What activates the glitch is keeping Zoda from doing its spawn alien move. A player can control it for the most part by being near Zoda. Unfortunately, in the four to five seconds it takes from entering the room to getting to Zoda, Zoda indeed used the move and spewed two alien spawn.

Final room before boss was a slight optimization. Otherwise it's the same. For some reason, I decided not to reset after getting the fake out by the snake. Costs about five seconds.

Biggest issue here is the octopi patterns, both the small ones and the boss at the end. The first forced octopi room had perfect luck. Second one was less ideal. Boss was pretty good. Came into attack range a little faster than I expected. Pretty good chapter. Despite the time loss in Chapter 1, was ahead of pace by the end of Chapter 2.

My favorite chapter. Love the dungeons in it.

3-1 had the best first room dodo pattern and acceptable second room pattern. The winged jumping monkeys weren't bad. Not perfect, but not bad.

3-3 is difficult. Random elements, invisible elements, dark elements. Need to stay above 2 hearts by the end of the dungeon. Got a great bone dog pattern in the first room.

Mummies are much easier to kill if you start your attack befor you fully land on the tile. This technique works anywhere really. Anytime Mike is using a weapon perpendicular to the direction he's traveling, he'll have coverage over both vertical tiles. This will make the game easier and feel smoother even though the game's controls can feel clunky at times.

Got good hand luck but bungled it.

Room afterward only requires you to kill the top four mummies. Bottom four are unnecessary. My movements patterns are designed to keep the mummies I don't need to kill away from the others.

Maxie, the boss, can be pretty random, but I got a good pattern here.

3-4's final room is tricky. I kind of botched my strategy, but got really good luck and did the room very fast.

3-5 has the dreaded froppas. Very critical to keep the shooting star. Lots of time is lost if you don't have it.

First part is pretty simple. Froppa spawns are pretty random and I had to kill two of them. Not too bad. Didn't hit me, which was important.

Got a bad taurus bulba and had to do some extra dodging.

In my last run I had a really good Chapter 3. This one was even better, by about 6 seconds.

Didn't go for the green bowling ball trick, which is stopping it from the middle so you don't have to wait for it to pass on the left hand side. Would save about .5 seconds or end the run. Bad final room. Lost some time there.

This chapter is pretty fun. Also happens to be my weakest chapter skill wise.

In 6-1, the right hand octopus sometimes isn't hit with the shooting star for reasons I'm unaware of. That's why I keep firing until it's hit.

Rest of 6-1 went well for my standards. Boss can be annoyingly random, and I don't play it well. Lose time here, as well.

Notzeldabubble gave me issues, but I was okay.

Got some bad luck with the phasing golem things. Lost time there.

6-2 has improvements to be made. Scaryice, the runner that beat my old time, is much better at this chapter than I am. I could probably pick up 30 seconds pretty easily in this chapter.

I am much better at this chapter.

Best way to fight the boss is to get underneath the robots. One was cooperative, and that was a good time boost.

7-2 is where I picked up the most time. The new boss strategy accounts for the majority of it. Health is really important here as the game does an incredibly slow health refill at the end of the chapter.

Almost had a perfect turret room.

Sub boss was a bit of a jerk, but fine.

New boss strategy went not fully optimal, but it did its job. Still fell into the pit without a huge leap forward.

Decent health at the end. Better than the previous run.

You're at the mercy of the hands on the first boss. Pretty much 50/50. Got four. Same as last time.

Last possible shot on the core killed it. Getting hit was bad because that lowers your firing rate.

Two spawns by Zoda before I could get near him. That cancels the glitch. If he spews zero or one, the glitch happens. If you're near Zoda, he won't spew them. Unfortunate.

Solid run. Similar in quality to my last one with a few upgrades to the strategies makes for a faster time.