Released in May 1996, Strife was one of the last FPS games to use the Doom engine. You play a mercenary who wanders into the town of Tarnhill because you hear of a war between The Order, a religious dictatorship, and The Front, a rag-tag resistance movement. 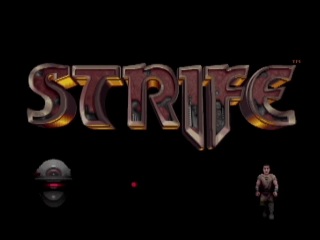 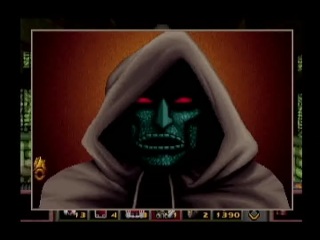 My first speedrun! Woo! Anyway, this is my third recorded speedrun for Strife and the second submitted one. I finally reached my goal of making it a 100% collection sub-hour single-segment run too. Strife is a quite random game when it comes to enemy behavior which can either make it a very easy game or a very hard game depending on how lucky you are. Noticable in the first room where you can lose anything from 0 to 150 HP while trying to take down the guards. Difficulty doesn't matter much. A thing I do throughout the whole run is to pick up health. I probably could pick up less than I do but I like to be safe. Also the game is filled with various bugs like getting stuck in enemies, gliding effect, bouncy corners and such. Partially due to some of those I run into a lot of walls. Anyway, onto the run...

00:14
I kill the two guards in the first room to avoid problems later.

00:30
I run past Rowan and go directly to the Sanctuary to get the ring. I really hate the electric bolts. Ah, well. I only use them in the Sanctuary anyway.

02:37
When talking to the Governor I choose the first chore so I don't risk setting off the Power Station alarm. And because I think it's faster.

6:04, 7:22, 7:44
I kill Worner and Sammis to get their keys without having to speak to them. I also kill Ketrick, but he deserves it. And he likes getting into my way.

8:45
I take the elevator in Sewers half way down to avoid the insane fall damage in this game. And until you get to the second part of Sewers you do not need to put on an environmental suit. I think that I do not need to get the key from the guard, too.

15:40, 16:37
I fall off a platform in Guard Training losing some seconds. And I bit later I miss a switch and is severly violated by the stalkers. I hate stalkers.

20:44
The Programmer goes down very fast. 5 seconds from first shot until he falls down. Probably the fastest completion time I have done yet.

22:30
I take it easy when going to the Oracle. A missed jump in the secret tunnel is a failed run due to time/health lost getting back up. I also kill his bodyguards to avoid possible problems with them later.

24:20
Tonnes of supplies in Borderlands. Me likes.

25:22
Only reason I talk to Quincy to be able to buy health from his assistant later on.

27:36
Switches can be pressed before they have been lowered/raised. although I miss the one in Administration a bit.

30:06
Ah. Bishop's Tower. I run all the way to the Bishop without setting off the alarm meaning that most guards ignore me. Bishop goes down very easily too. Although I get stuck on the elevator due to the crusader blocking my path. With stalkers and templars coming to kill me. This makes me lose a lot of time.

33:20
Now when I talk to the Oracle I get to choose which of the endings I want. And I want the best ending so I choose to kill the Oracle. Not that hard.

34:56
I miss the jump in Catacombs. Makes me lose some more time. At least I get some health because of that.

35:35
Yay! It's BBQ time! Actually, the fastest way to get rid of most of the enemies guarding the Temple is to really abuse the WP grenades. The Spectre took two shots to kill. Meh.

37:55
I hate the Mines. Tonnes of enemies with and without shadow armor. And to avoid setting off the alarm in Commons I have to go through it twice. Yuck.

43:19
The Converter holds tonnes of supplies. And also a Mauler, which I skipped getting earlier.

45:33
Macil fight didn't go as well as I'd hoped. 4 shots to kill the Spectre. It is possible to kill it in one shot, but that is very difficult and requires lots of luck.

46:04
Here I bring up the Stats screen. I forget to bring it up later so this is the only proof I get 100%. The last 10 Health/Accuracy I get when killing the Loremaster later.

50:23
Proving Grounds is probably the most difficult place to get through the first time you play Strife. Is is a huge labyrinth filled with enemies, although most will ignore you unless you open fire. The path I use is probably the shortest path unless someone finds a glitch to get past the locked gates here.

52:15
I hate the Loremaster. I also do a quite poor performance by hoping that his spectre would get up to the upper level, although it first got stuck behind a platform and then down in the pit. At least I found a new strategy to kill him.

55:10
The stalkers messed with the elevator so I actually went up to the health cache on the top.

55:45
I love the speech given by the Entity. Too bad you have to wait for a long time for it to appear but when it does it goes down fast.

Considering how bad it went in some places I am quite surprised I got a time less than an hour. Ah, well. I will probably do another (better) run of Strife someday but on a harder difficulty. And I do know that a time of around 45 minutes is a possibility but that is also very hard to attain. Basically everything have to be perfect in such a run.

As promised I also did a run of the second ending. The basic route is the same up to when I kill the Bishop with the difference being I skip a stat upgrade and the Guard Training due to it being impossible to get 100% collection on the second ending. I also have to pick up the mauler in the Fortress because I cannot pick up the one in the Factory.

15:48
I miss picking up the ammo satchel in the Audience Chamber leaving me without WP-grenades in the Programmer fight.

31:15
Fighting Macil's spectre is quite hard when doing this since you have a weaker sigil than when going for the best ending. And the Front troops keeps getting in the way of my shots. Do they not understand that the spectre is invulnerable to normal weapons?

42:14
The Entity has another speech here. No difference otherwise, though.

This run can also be improved. I dunno if sub-30 is a possibility, but with tonnes of luck it might be.