Published by Atlus in 2006, Summon Night: Swordcraft Story is the first Summon Night game to see a US release. While the main series consists mostly of SRPGs, Swordcraft Story is similar to the Tales games with its overhead view that transitions to a 2d battlefield for vaguely fighter-like combat. As an apprentice craftknight, players explore a vast labyrinth directly beneath the character's home city, built to contain a powerful otherworldly spirit. 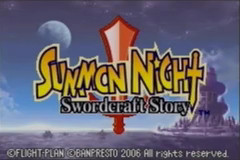 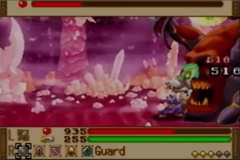 One thing I like about this game is that it doesn't require the player to go out of their way for leveling, at all. The controls are tight, almost no attacks are unavoidable, most attacks can be "just guarded", and the game even rewards the player with extra experience for fighting enemies over their level.

There's also an experience bonus for defeating enemies without flinching, but this is hardly as significant as the "underleveled" bonus can be. Thus, if I am careful I never need to hunt random encounters to level. However, leveling to learn astral guard helps speed, so I can't completely avoid it.

"Level-dodging" is hampered a bit in the postgame by the gem bar, which limits you to five spells or item uses in any given battle. Player level also affects how quickly you can retreat from enemies, so it's occasionally worthwhile to murder lone enemies (eg Brute Monk, Iron Giant, Red Dragon) and maybe get a level.

All dialogue can be skipped at high speed by holding R+B. More games need to do this. The dialogue has to display completely before it can move on to the next bit, so if anyone really wanted to read it they could.. presumably by slowing or pausing the movie.

Some shorthand, and some terms given by the game itself.