Super Dodge Ball, originally released in Japan as "Nekketsu High School Dodge Ball Club", is a dodge ball-based sports game released for the arcades and the Nintendo Entertainment System developed by Technos. Originally released in Japan as part of the Kunio-kun series, it was released in North America in June of 1989. Super Dodge Ball departs from the traditional rules where you tag your opponents until all players in the field have been eliminated. Instead, you must repeatedly pummel the opposing team's players until they not only die, but their very soul escapes their lifeless body and ascends to heaven. 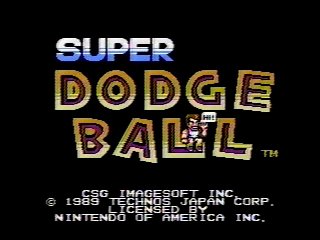 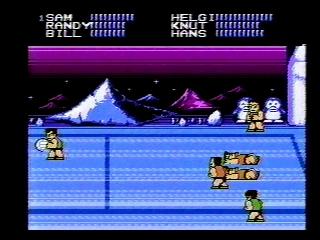 This game has a lot more depth than what is seen on the screen. Manipulating the flight of the ball, starting the dash as close to the center line as possible, predicting the actions of the enemies, and finding the right horizontal plane to attack from are all subtle tricks that a runner has to learn to get a really good time.

And, of course, a lot of luck. Bunches of it. The Swami skip (required) is all luck. But this speedrun is so short that you can fly through attempts and if the runner keeps play quality high enough and consistent enough, a good luck run will happen.

This is one of those runs. Happens to be the fastest at the moment. Enjoy.