Developed by Technos and released by Tradewest in 1992, Super Double Dragon was the first and only pure installment of the Double Dragon series to be released on the Super Nintendo. Once again, players take control of Billy and Jimmy Lee as they battle their way through the nigh on endless stream of goons from the Shadow Warriors to rescue the easily captured Marion. 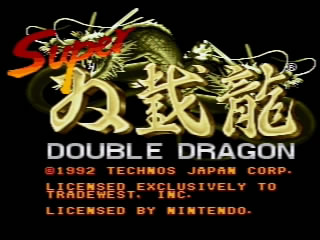 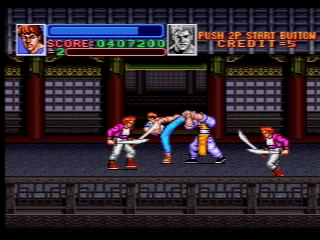 The attack pattern I use is VERY touchy. Kick, punch, punch, down kick. If the first 3 are not done fast enough, you will get diff animations and thus messing up the combo. If the last kick is too early, you will round house, which is slower. If its to late, its wasted time. Its mostly muscle memory. I really need to run the first lvl at least once before i get he timing right.

As the game progresses, every guy takes more hits to kill. The guys without the headband always has the least amount of health, the sword guys and the guys with head bands I believe have the same about which is more that the fist guy. Then there are bosses but they don't show up often during the missions. Also, as the game progresses, they get really really aggressive.

Mission 1: This mission is the biggest pain for the whole run IMO. Really hard to control the first few guys to get all the time saving tricks to work.

Area 1 - All went rather well. I had a mess up with the one of the first guys but because of how another guy lined up right on top of him, it fixed that issue. I saved the knife for the nun chucks. I took that hit from the boomerang on purpose for a ever so slightly faster kill on the 2 guys. Thus closing out the first screen.

Area 2 - Overall went well, I was able to get the guys to semi stack a bit and not run away from me. Got lucky with receiving the knife, because he really likes to throw it at some other person standing around that is usually almost dead... or in the back of my head...

Area 3 - This is all position and timing, nothing else. If you fail either of the 2, they wont stack. And here is a good example of my normal attack pattern. I kill the first set of guys in 5 knockdown, excluding the first kick to stack them. With my attack pattern, its 2 knockdowns.

Area 4 - All went really smoothly. I was able to stack the last 2 guys a bit, which is rather tough.

Mission 2: This mission is only a pain because not all bombs get used all the time. Other than that, this is cake.

Area 1 - I force that guy with the knife as far as I can to the right before making him drop it. The screen likes to move quickly to the right soon after a few guys die off, this allows me to keep it for later. Lining up that knife throw is though, because that green guy does not like to stand in front of you like at all. I took a few cheap shots but all went well here.

Area 2 - I was able to stack the first set of guys. And the guy with the first bomb was JUST out of my reach and I had to kill him myself. Everything else went real smooth from there. Also, it's faster to not save the bomb for the guy in the tux. At least that is what I concluded.

Area 3 - First bomb went better than I wanted it to, YAY. I was unable to stack the guys that drop out if the plane like I wanted, but still went well. Ok, from here on out, the guy with the tux is a real pain, he blocks and gets a lot of cheep shots in. Guy with the iron hands did not block nearly as much as he normally does, he is the best blocker in the game.

Area 1 - strait forward open. Get the weapon of choice, then rape.

Area 2: You have to try and stay on the left side of this place or the guys will not come down the stairs.

Area 3: Tried to stack all 3, but its really really hard. And yes, I wanted to hit the bag.

Area 5: Don't use standard kicks against the Chinese masters. Unless you are in certain conditions. 1: not fully lined up, 2: he just stands up, 3: you are attacking another person and he walks into the fight.

Mission 4: I really hate the push back one this stage.

Area 1 - Because of the push back, its really really hard to use my normal attack pattern. So this area is basically float like a butterfly and sting like a bee.

Area 2: strait forward ass kicking. I was lucky for none of them really running away from me. And as said before, he like to waits knifes on half dead guys...

Area 1 - WTF, how did that knife miss?? I believe it was that he was in another animation. So i was ripped off there... I really don't know why. but I threw the barrel off screen like a dumb ass... Supposed to save it get the knife easy, but how they decided to attack me worked out in my favor so I only lost minimal time. Position FTW to for the knife into another guys face.

Area 2 - This area is tricky. And the boss is a real pain when he wants to be. I pause on the first set of stairs to not be hit by the knife. Don't pause, you eat a knife. I really really hate this boss and his "Blanka Ball" imitation. I was lucky enough he did not get a chance to do it though.

Mission 6: How Did I go from an urban setting to the middle of no where??

Area 1 - GET IN THE HOLE!!!!!!! Nuff said. That jump in the bridge is a SUPER PAIN. But i cleared it just fine. You will notice the knife is used not on the boss. and you will also notice that the boss is not the last to die. Reason being that this is a cake boss. I don't think I have ever been hit by him more than 2-3 times during any 1 run.

Mission 7: OMG THEY ARE AGGRESSIVE

Area 1 - Position FTW again. And let the cheap shot marathon begin. I have never beaten this mission on 1 life... or 2. That will become apparent as why in area 3. first part is strait forward.

Area 2 - 2 at a time fights, easy stuff. I waited to save that knife though for area 3.

Area 3 - This is the cheap shot heaven. Not being able to save any knifes for the fat man really slowed me down. But I cant control them so I have to suck it up. He only did 1 "Blanka Ball". I was lucky. 2 tux guys at once, watch me suffer. That knife Came out of no where, I had no chance.I moved too far to the left and ended up losing my knife... The final boss really knows how to deliver and take a beating. I do my best to keep him either on the ground or stunned at all times.

And that's it. This is the first appearance for this game on the site. I am hoping it will last a while.

Thanks for reading and or watching.
Heidman