Super Mario Advance 4: Super Mario Bros. 3 is an enhanced remake of SMB3 remake found in Super Mario All-Stars. Added to it is a multiplayer mode and an e-Reader which was able to give the player additional power-ups and exclusive levels, most of which were released in Japan. These levels could go from common to extremely rare. Unfortunately Nintendo later removed the e-Reader from sale and modified the gamebox art to remove any mention of it as well. 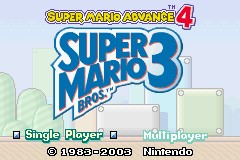 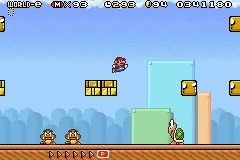 Super Mario Advance 4: Super Mario Bros. 3 features e-Reader compatibility, in that it can link up to a second Game Boy Advance with an e-Reader. There are 3 different types of e-cards for this game:

Power-Up Cards: When one of these is scanned, it will upload an item (or a set of items) into either Mario or Luigi's inventory. There is no limit as to how many times an item card can be used. A variant type of Power-Up Cards are Switch Cards, which will trigger something in the game upon being scanned.

Demo Cards: Plays a movie of either Mario speed-running through a level, collecting enough coins in a certain level to trigger a Blue Toad House, or racking up numerous 1-Up Mushrooms via a special trick.

Level Cards: Uploads a brand new level into the game, which can be played in World-e. Note that only 32 levels can be saved on the game at a time, but the listing of levels is endless.

So the most notable feature is the Level cards, brand new levels exclusive to the GBA version. It is also notable for using assets from other 2D Mario games including Charging Chuck from SMW, Vegetables from SMB 2 (USA) and even the end of stage goal flag from SMB 1.
Unfortunately the reception in the US was such a flop that only 2 out of the 4 series were released. This means there are only 12 officially legit level cards released in the US. The reception in Japan was a bit better, releasing 26 more level cards making a grand total of 38.

Mushroom stages are common extras,
Promo stages are very rare extras, usually not sold through retail back in the day.
Star stages are remakes of Super Mario Bros 1 stages.

As of 2014, there is a way to play through the JP released levels on a US copy by importing a special save file or trying to print out dotcodes on photo paper. I'm not sure if it gets accepted because the levels names are unofficially translated but at the same time it doesn't affect timing differences. Mother 3 is a good example because the text in that game scrolls so the timing will be different if the language was set to unofficial English. The rarest Japan only e-card is basically called

This level was not sold in a basic set of cards, players would have to bring their copy of the game to select stores and retailers would download the stage onto their copy of the game. This level is so rare that it was only very recently this year, a lucky player who has the official level data managed to dump the save file. Before the save dump, people tried to re-create it as faithful as the original but back then it wasn't 100% accurate.

Here is the original version of the level:
https://www.youtube.com/watch?v=Ci2SBefk9Vc

Now here are the level comments:

Mushroom-1: Wild Ride in the Sky

A pretty straightforward level, 90% autoscroller. A red Koopa shell is used to block the top right diagonal bullet bill. The Super Leaf is used to skip the slow moving platform after the end of the autoscroller.

Taking notes from the Super Mario Bros 3 TAS, backwards slide jumping is a bit faster. Unfortunately there are a few enemies in the way when going up the slopes, the Yellow Paragoomba is the most annoying enemy because sometimes it never jumps usually meaning Mario takes a hit and dies. So I had to use a different strat that involves bouncing on top of a Red Paragoomba to not only go up the slopes a bit faster but also reduce the risk of dying from a Yellow Paragoomba.

After playing this level, I can see why the Super Mario Bros 3 engine has a higher skill cap than the NSMB games. This level is a perfect example of keeping P-Dash speed at all times, it makes a huge difference.

This level is meant to be a maze but thanks to Racoon Mario, it's possible to skip it. This fight uses the SMW Giant Boo fight asset but the biggest difference is that you cannot kick Grab Blocks upwards thanks to the SMB3 engine.

Another stage where 90% of the run is an Auto Scroller. The fire flower is used to quickly kill Boom Boom. Nothing much else to say.

This stage is very evil, nothing but musical blocks, a few Koopas and a wall jump trick to save time. To make things worse, after exiting the pipe there is a chance that after a small bounce, Mario isn't standing on top of two musical blocks when he lands (basically only landing on one note block). This is mainly because of sub-pixels.

Looks straight forward but it's actually pretty tough to optimise. The stage starts off with a near pixel precise jump. The first P-Switch sections is inconsistent most of the time as there is a risk of jumping down through the 1 block gap because there is a chance Mario touches the wall exactly at a block boundary halting his vertical speed completely.

The first jump from the Green Piranhas plant's pipe goes to the far right in order to spawn a Green Venus Fire Plant, then I briefly pause for half a second so by the time Mario goes to the right, the Fire Plant never spits a fireball and goes inside its pipe. The rest is pretty straight forward other than a full jump near the end as a consistent way to pass the left side Red Piranha plant.

A very evil level, it's one of the few stages where hitting P-Dash speed at the wrong places can screw you over. P-Dash speed messes up how Mario jumps and some of the swing bars forces him to slow down. One perfect example is the big swing bar & the many 1 block gaps that require dashing. If you P-Dash, you go too fast and die from the slow moving swing bar. This is also the only stage to feature 2 Boom Booms in the same room. The speed run strat for that fight is actually easier than I expected.

Probably the only level that is close to TAS-optimised. The only possible way to improve it is better sub-pixels but that's hard to do without using memory reading tools on an actual system. The stage is purely an autoscroller with the exception of the end of level area after exiting the pipe. To make the run more interesting to watch, I get all 5 Advance Coins.

Star-1 World 1-1 is the only officially legit Star level card to be released outside of Japan. The stage itself for speed running is similar to Mushroom – 3 where P-Dashing is really important. The pipe strat is a bit slower because by the time you exit the pipe, you can't get P-Dash speed and jump over the flag.

Another autoscroller but this one has a skip that saves over 1 minute. The method is to perform a zip that leads to final area and then wait, the game has no barrier when going above or below the camera but it has a barrier on both sides preventing Mario going too far to the left or right off-screen. Waiting is required during this run so getting the zip first try is not important but it has to be done quickly because one of the grey bolt like platforms eventually unloads preventing Mario to stop at his ideal position before the upcoming part.

After the camera stops panning downwards, starts going to the right and the timer says 231, I hold B + Right and then press the A button for 3 full jumps, after the third jump I rapidly press Down and Right to enter the pipe. This is the most consistent way of entering the pipe off-screen. The only downside is that I have little to zero speed before the next area so I cannot land on the 2 slightly raised blocks to the right for a slightly faster kill. If you don't have enough speed when entering the next area (absolutely going to happen when doing the reliable off-camera strat) then you got to shoot one fireball right after gaining control, then go to the leftmost part of the lowest section, turn right and shoot 4 more fireballs. From that position the fireball never touches a wall and hits Morton instead.