Released in September 2001 by SEGA and developed by Amusement Vision for arcades and the GameCube, Super Monkey Ball is a simulation of what would happen if a marble with a monkey inside fell into one of those tilting floor toys you had as a child. 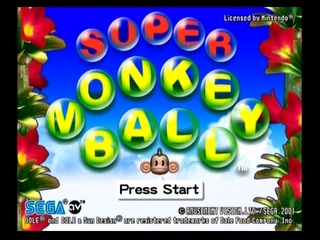 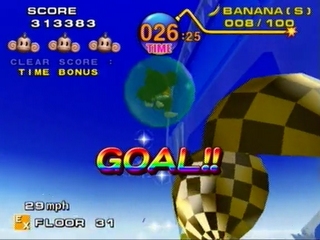 You can watch the run on YouTube here, if you prefer an embedded version. I would definitely recommend downloading the HQ or IQ version though.

Brief history for this run: I originally planned on running this back in 2009. However, I quickly stopped, because it's an incredibly difficult game to run well and I didn't really enjoy it all. Then late last year, someone submitted a run to SDA; I rejected it because there were a lot of strats it didn't use and general slow play. This kind of forced me to do a run myself, since I had deprived SDA from getting one. After taking such a long break from it, though, I found that... I still didn't enjoy running the game whatsoever. Great. Anyway, after 3 1/2 months of on and off attempts I completed this, which is a ~2:45 improvement to the rejected run.

I didn't specifically go for no deaths; I would've been fine with anything less than 3, as long as they weren't costly. Thanks to insane luck, that didn't end up mattering. There are some bad mistakes in this run (most notably E13, E22 and E48), and several strats I left out for the sake of consistency. Hopefully someone will come along and beat it in the future, but this is certainly a good enough run for now.