Released in June 1994, Super Star Wars: Return Of The Jedi is the third and final installment of the SNES run and gun series. The game loosely follows Luke Skywalker along the plot of the movie to defeat the Evil Emperor on the second Death Star, including the (unfortunate) choice of Wicket the Ewok as a playable character. 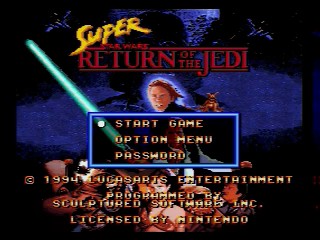 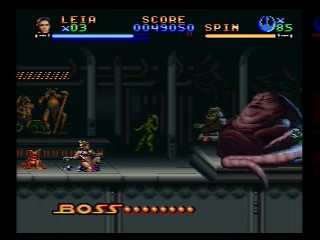 I would like to thank the SDA-crew for hosting and maintaining the premier site for Speedruns. No one particular mentioned, no one forgotten.
I started playing Return of the Jedi during AGDQ-2013. Thanks to PJ for bringing it. I had no idea I would enjoy it so much. In my opinion this is the best of the Super Star Wars games. It doesn't suffer from the lack of double jumps and overall poor mobility like 'A New Hope' or suffer from the stupid double jump mechanics and ridiculous Mode7 stages in 'Empire Strikes Back'.
A few major differences in Jedi is that you have several character choices for most levels. Wicket and late Luke-levels are the only exception. You also begin each level with level 1 (Laser) blaster.
Good parts of this run:
RNG RNG RNG.
Early level execution.
I had decent luck with the wall-zip, very good luck with the speeder bike level and good luck with the Ewok boss skips (at least one...).
Bad parts of this run:
Force freeze jumps. I'm not strong with the force.
Late level execution.
Random small mistakes.
Shout outs to Striker, Jadin and Tompa. And everyone else in #SSW.

The run is improvable by a lot. In theory, 28:XX is possible with perfect luck with enemy spawns/despawns, perfect lag management, perfect enemy A.I and perfect execution. At least that's what the sum of my best splits tells me.