Officially the 4th and 5th in the series, Super Smash Bros. for 3DS and for Wii U are sibling releases of mostly-the-same game on the two consoles respectively. Some of the Wii U enhancements over previous installments include eight-player multiplayer and customizable specials that can be unlocked for each character. In gameplay, the games were meant to lie in-between the faster Melee and the old slow-paced Brawl. 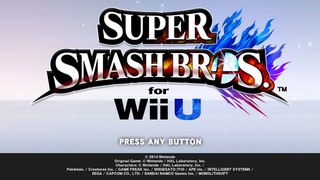 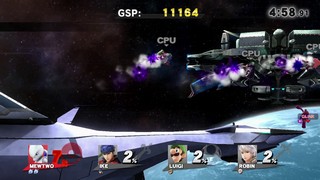 Mewtwo is a DLC character who unfortunately lacks Custom Moves.
However it was just less than 24 hours after release that someone managed to discover a bug that allows Mewtwo to use its other Special moves. It looks like it was obviously unintended as the majority have really bizarre effects.

Neutral B - Slot 2 : Warps Mewtwo to the rightmost edge and extends its hitbox to infinity. It allows me to spam Down-Tilt, Up-Tilt or Neutral B to infinite combo against regular fighters.

Side B - Slot 3: Freezes and attaches to Mewtwo. Useful for walk-off stage abuse.

Up B - Slot 1: Regular teleport

Down B - Slot 3: Mewtwo performs an invincible spin which slows the enemies down for ~2 seconds. Useful to punish enemies' laggy attacks and follow up with a Side-B to walk off.

To do this glitch: it has to be done on V1.06 which is hard to get now because it is no longer the current version. For each time you boot up the game or after choosing a non-glitchy custom loadout, you have to transfer a created Mii from either Nintendo online or a local 3DS. The latter is preferred because you don't have to be online doing that. After that Mii has been transferred, the next time you select a character and hit RANDOM on the customs loadout list, it will inherit both the equipment and custom specials from your transferred Mii.

This run strictly uses the in-game timer otherwise, I would be at a disadvantage for slightly longer realtime loads as I'm using a physical copy. Realtime runs also needs to factor the RNG dependent INTRUDER ALERT events costing even more time.

The run itself is improvable as one of the rounds I had at least one character dying to a slower star KO animation. It is really risky to try and get more than 2 enemies to instant star KO but it is rewarding at the same time.

Outside of the regular fights, Master Hand is RNG heavy as I am wearing a critical-hitting brawn badge, I need to be lucky and score at least 1 critical hit to reduce the number of hits required to kill Master Hand.

I did do a few runs at Intensity 9.0 but Master Core is a lot more RNG heavy as I need a few critical hits to save a good amount of seconds and Master Fortress has a huge sequence break when using Mewtwo's infinity hitbox. The infinity glitch is also a infinity hurtbox so lava damage can actually hit Mewtwo. Some of my runs were really quick or 30 seconds into an infinite combo at 999%, somehow regain control and finish the job off.

As many runs are usually improvable, this one is harder because it requires running V1.06 and as of June 7th 2015, the current version is V1.07 which sadly fixes the bug, a version V1.08 is coming out soon for 3 extra characters as DLC.
The only solution right now is to hunt down a Wii U system with V1.06 or go a few years into the future where exploits are becoming as common as the 3DS and download a V1.06 patch file to the system, good luck with that.