Terrific top-down shmup with a twist, Super Spy Hunter (one of 14 licenced NES titles beginning with "Super") actually is a sequel to an originally arcade game that was first planned to feature James Bond, hence the spy reference. It's a road shooter where you also drive in water and sand and fight other land vehicles, helicopters and multifarious bosses. The premise is you, a free "spy hunter" agent, are to prevent wide-scale terrorist-inducted chaos in the world by neutralizing a threat going by the code name "X". 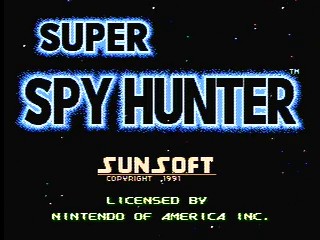 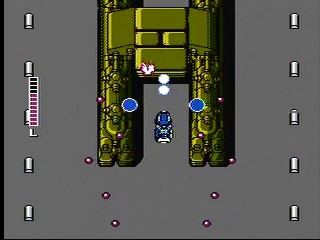 I love Sunsoft games. I am sure that is not a surprise, given that I have run Journey to Silius and Fester's Quest. As for this game, Super Spy Hunter, I chose this because I enjoy this game and because I wanted to be able to plow through it as fast as I could.

Now you may look at this run and wonder how it is a speedrun? While it looks a lot like an autoscroller you can control the speed you travel, although this may not be immediately apparent from just watching.

General:
- Speed Control: I attempt to maintain the maximum speed possible throughout the entire run.

- Power-ups: There are red power-ups and blue power-ups. Red power-up are permanent upgrades and blue are mostly one-time use special weapons, but you can also get a life restore or a 1-up. Power-ups are brought by either trucks or helicopters and the power-up type cycles until you destroy the truck or copter. When you encounter the next power-up carrier, the first power-up will be the one on the cycle after the power-up you freed from the last one. For example, the rotation of the red power-ups is R, C, P, L. If you free an R from the carrier, the first power-up on the cycle when the next carrier appears will be a C.

Blue:
O - Releases an oil slick that causes enemies that run into it to crash
6 - The gun detaches and floats around, continuing to fire and damaging enemies it touches
B - Destroys all weak enemies on screen
1UP
T - Activates tire spikes that you can use to damage/destroy enemies by hitting them from the side
L - Restores 4 health

- Terrain: There are various types of terrain. Most of them can be travelled at full speed. Your maximum speed is reduced when driving through water or sand, which you are forced to do in Stages 1 and 2.

- Taking Damage: I found it best to just take the damage and count on health restores. Even a slight movement out of place can result in problems at times, especially since high speed is being maintained.

Stage 1
- Powering up as soon as possible is key. I grab an R first as this will allow me to mash the fire button to destroy enemies quickly. Throughout the stage I am able to grab enough power-ups to max out my firing rate and attack power, and end up one life power-up short of maxing out my health. Luck helped me out in the beginning as the copters on the curvy bridge all spawned where I could destroy them and prevent lag. Not really much else to say. My mashing was pretty good on the boss fight so that went quickly.

Stage 2
- I finish out powering up nearly immediately at the start with the last life up I need. Grabbing the Oil sub-weapon isn't necessary, but I do so to set-up the next blue power-up to immediately be a B and it's still useful anyway.

After the first sand section, some quick swerving is necessary to avoid crashing into any walls. I'm not entirely successful, but fortunately it's only a sideswipe and doesn't kill my momentum like a head-on collision would.

The quicksand whirlpool field is next. I get off to a rough start, messing my pathing up and getting slowed down at the edges of a couple of whirlpools unintentional, but I recover quickly and hit the intended pathing.

My favorite part of this stage is the boss. The fight is very straightforward in a casual playthrough, but there's one subtle detail that makes a huge difference in a speedrun. You may notice I do a lot of damage up front and then stop and wait before finishing the boss off. The reason for this is that the power-up carrier that you need to destroy to end the stage will not show up until the boss has left the screen. Not only will the boss not leave the screen until it is at a certain height at the top, but it will drift slowly until it reaches that specific height. I finished the boss off almost exactly where it needed to be to leave the screen immediately.

Stage 3
- There isn't much to say about the stage itself. It's pretty much about staying on the correct path and managing lag, so I try to destroy everything as quickly as possible.

I didn't get an ideal pattern on the boss as it was able to fire a laser off from the center cannon just before I could destroy it. As the lasers are instant death, I had to make a quick dodge. Everything else went as planned.

Stage 4
- Autoscroller! This stage is all about lag management, so again, I tried to destroy everything as quick as possible. I used my Bomb on the oil can trucks to prevent them from dropping their barrels.

The boss fight went well. Again, lasers are instant death, so I stayed back in order to lead my shots and destroy the first laser cannon quickly. Then I dashed up and destroyed the other cannon before it fire again. From there the boss becomes vulnerable once it begins shooting, so I get in close and pummel it once it does.

Stage 5
- The longest stage in the game and I do mean long. You start off on the water and have to traverse a field of floating cannons and then instant death mines. Even though I've gained a feel for how to path through, I'm still never comfortable.

After that it's back to driving the roads, but only briefly, for then suddenly the car become a plane and we have an autoscrolling shmup section!

This section is painful. It's long, it drags on, and I have to worry about managing lag. Not much to say about the boss, really.

Stage 6
- Ugh, caused some lag at the start because I waited for a safety health power-up. Then I stopped short before the pit later on had to take extra time to get in the right position to trigger the bridge. The rest of the stage went well, at least, and I can say it's a lot more dangerous than it looks. Running over any of the eyes on the red floor trigger an instant death laser beam, which would have ended my run due to colliding with it or having to sit and wait to get past it.

Next up is a mini boss rush. The first boss is a more difficult version of the Stage 2 boss. I had a lot of trouble re-focusing the aim and that cost me as the boss wasn't in a good position when I finished it off.

The second boss is a more difficult version of the Stage 4 boss. Looking back at it I definitely let my nerves get to me and played it way safer than I had to on destroying the second laser cannon. My firing was okay on the final phase, but I feel like it could be better.

The last boss went well. I was a slight bit slow sliding over to attack the core in the final phase, but I managed to get enough shots in to destroy it before it could fire its instant death laser.

Summary
- Overall I'm happy with the first five stages of this run. Stage 6 has some bright spots in the toughest of the areas, but it can be better and it's definitely something I plan to improve on once I have the time to work on this again. Further improvement can likely be had by better lag management, as well.

Thanks to
- All the usual people I thank. I've mentioned you all a lot in my comments for the other runs I've done, so you know who you are.
- The staff of SDA for all the hard work they do, especially for always addressing any questions and concerns I've had in a very timely fashion, as well as putting up with my frequent procrastination in getting my submission files and comments together.