Part Metroid, part shmup, Rainbow Art's 1993 Super Turrican for the NES was created by a one-man team, Manfred Trenz, who also created most of Turrican and Turrican II before it. In it you fight the forces of darkness through 15 progressively more evil stages. Considered hellishly difficult by most players, owing partially to bad controls. 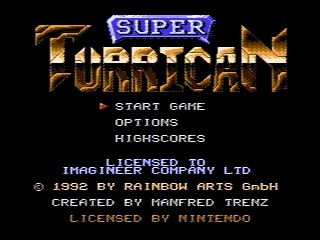 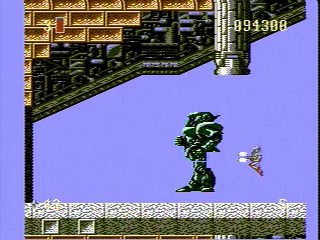 Super Turrican is a game made by one person. It combines many elements of Turrican 1 and 2.
This is the NES versions, not to be confused with the SNES version of the same name.
Technically this is a PAL game played on an NTSC console, but it can detect which region it is
being played on and runs at the same speed on both systems. More about this is on TASvideos.

This is a really fast-paced game, so rather than go level by level I will just describe all
the different mechanics.

- A jumps.
- B both shoots and runs.
- Holding B while stand still activates the lightning whip.
- Pressing start while using the lightning whip activates the mega weapon that fires all around you. You are mostly invincible with this active and can use it every time the health bar is flashing.
- Start uses the energy lines. This is the number in the bottom right corner. You get 8 shots per use, and these are extremely useful for killing bosses.
- Start and down activates wheel mode, which is the fastest form of movement. The wheel doesn't stop moving, and can bounce around erratically. There are several places where I have to move backwards slightly or unmorph to get the correct bounce. But even more frustrating here is turning into the wheel without using an energy line.

- Items that are floating in the stage are the same every time, but items from enemies or hidden blocks are random.
- There are 3 weapons, each with 3 stages. The laser is by far the only useful weapon, both because it does the most damage, and it auto-fires, so that you can use it while running.
- The lightning bolt increases the length of the lightning whip.
- The shield lasts for 4 hits, but its invulnerability frames are much shorter than yours, so it can disappear quickly.
- Finally the L increases your energy lines. I have to pick up several of these in the run for optimal boss times.

- After exiting the wheel, you can jump even if you are in mid air. This is extremely useful in many areas.
- When you are really close to something, your energy lines fire more than once per button press. This is how the second boss can die so quickly.
- Speaking of bosses, their patterns are completely irregular, I've never seen the same pattern twice. It was a miracle the fourth boss stayed in my line of fire.
- In stage 4-3 you can zip up the right side of the wall. The jumps I have to do here are extremely precise. If I don’t jump at just the right height, you zip but the screen doesn’t follow you and you die off-screen.

We all should think about it !

Shoutouts to Blechy and Krankdud for helping me figure a few things out.
Shoutouts to Manfred Trenz.