Superman 64, released in May 1999, is one of the most infamously bad games of all time. It received negative reviews at release and was subsequently 'popularized' by a certain youtube personality. While famous for its pervasive 'kryptonite' fog and uncontrollable ring flying, the game also features several indoor dungeons. 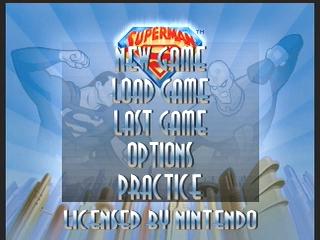 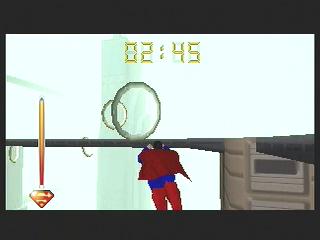 I picked this game up right after AVGN's review of it came out, and I agree that it's a terrible game. Worst I've ever played? Eh I've been less entertained... but from a programming standpoint it is pretty disgusting, frustrating, and plain disrespectful at times. The stupid amount of ring stages makes the game drag on too long as well. I wasn't a fan of how AVGN only showed the very beginning of the game and barely even hinted that there were indoor levels. I have a feeling most people think the game is only ring stages and is very short, or even incomplete/unbeatable. The truth is that it's a very long game with 7 dungeon-sized levels mixed into the rings.

I started playing through the game with intent to beat it as some others had done. I was amazed at how long and involved the indoor levels were, some of them take 1-2+ hours to beat the first time normally. I kept failing the first building level "Dam" and began to just mess around with glitches. I discovered consistent ways of clipping out of bounds (which is major considering Superman can fly), and that got me hooked on routing the building levels. I spent hours and hours finding the minimum required actions and the fastest ways to get from room to room in each level. After routing them all, I figured I'd do a couple single segment attempts. The very first was a 2:13, then a 2:05, then I started getting a little stricter on myself to break 2 hours. Overall I'd say I did about 8 attempts, finishing only 3. The ones I couldn't finish were usually due to dying in an outdoor stage or getting unlucky with Lexcorp or Park Place. The most terrifying part of doing this game single-segment is that the 2 crabs in the number puzzle room in the very last level of the game can kill you in instantly if they manage to get too close, that's an instant run ender since it would waste ~4 minutes. Getting a 1:53 definitely beat my expectations but there are 3 moderately large time-losses that add up to ~3 minutes total but overall it's a nice run, my ring-flying and outdoor enemy missions are stellar, got many personal bests there especially with the mine-dropper ones which can be a chore to do quickly/survive. It's easy to get unlucky and fail an outdoor enemy mission and have to redo rings, but I failed none ?. The 3 hefty mistakes I made are: #1. Star Lab (when I took-off to clip it didn't appear to have worked so when I press Z to take-off again I dropped down instead, and Superman gets stuck if he lands OoB so I was forced to restart the level). #2 While flying through rings near the end of the game I attempt to fly between two buildings but I get stuck. I can usually squeeze between them will a bit of effort but today the game just wasn't having it and I had to go around eventually. For future reference, always go over the building. #3 Starship (got stuck OoB early into the level and had to restart). With these 3 mistakes factored out, I still wouldn't have subbed-1:50, so 1:53 is good enough for me. I've spent a lot more time on this game than I originally planned to already lol, not interested in saving a difficult couple of minutes. Pleased enough that this run shows how the flying controls can be mastered with a little practice and that there's more to the game than just rings. Anyway, hope you enjoy the run but don't think this is super optimized, like I said I only finished 3 attempts. I never planned to take this to a down-to-the minute-optimized final time.

Extra notes: I play on the hardest difficulty, "Superman", because you can't access the last 2 levels of the game on the lower difficulties. What a dick move on Titus's part... having people play through 90% the game just to tell them "Awww sorry play through it again on a harder difficulty". As far as I can tell, going from Normal mode to Superman mode also removes the directional arrow during the ring stages, gives the dark shadow henchmen a little more health, and all enemies with projectile attacks are a bit more accurate/aggressive.
You can miss 3 rings per ring stage, missing a 4th makes you restart the ring stage. Failing an outdoor enemy mission makes you start back at the previous ring stage. Once you fail the enemy mission 3 times you don't have to do the previous rings anymore. I failed 0 outdoor stages :).

Thanks to: I found every trick/made every route myself, but Joshua8600 here on youtube has a very good playthrough of the game that helped me learn the final levels and he directly assisted me in figuring out the odd outdoor airplane mission at the end. His playthrough can be seen in the link below, definitely watch his videos of the indoor levels if you want to get an idea of how long and complicated they are normally, compared to how short they are in my run: http://www.youtube.com/playlist?list=PL8DB8D0D4979EFA82&feature=plcp

And thank you for watching!

-aleckermit AKA "Lord of the Rings"