Based on the same engine powering The Simpsons: Bars vs. the Space Mutants, this side scroller from 1992 boasts mediocre graphics, less than stellar music, and a ridiculous story. After getting exploded with a formula to revitalize plant growth, a bio-chemist turned creature of the Swamp takes his revenge on the doctor that created him through a village, a graveyard, a forest, a lab and (not surprisingly) a swamp. 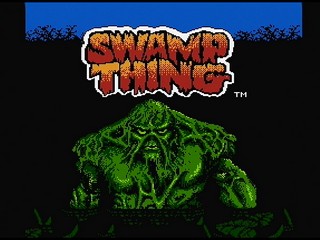 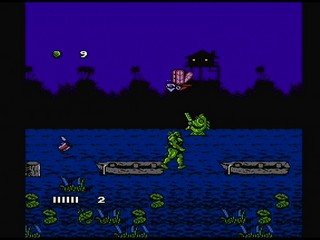 I first found out about this game thanks to Gildersneeze. He was doing a thing on his stream what he calls NES Roulette. Basically he picks a game off his Powerpak at random and plays it. This was one of those games. I remember watching him suffer through it and thinking "this is a really terrible game, but I bet it would be fun to speed run"! If you know me well enough, you already know it doesn't take much to get me interested in a game.

So, for the hell of it, I looked for the game on Ebay. I saw prices that were way beyond what I was willing to pay for it. Average prices for the game were about $40-$50. I was looking to pay no more than $10, so I didn't buy it. Jokingly, I said if anyone bought me a copy of the game, I promise I would speed run it. Surely enough, a fellow speed runner by the name of EggmanMN approached me at SGDQ 2014 with a copy of Swamp Thing as a gift to me in exchange of running it.

Now for the game itself...

It took me a while to realize there's a run button (it's A, which is also jump....). After that, it was a matter of memorizing the stages. I never really determined if enemy spawn patterns are random or if they're on a global timer. I didn't care enough to look that far into it. Swamp Thing was lucky I spent as much time as I did on it.

Stage 1 is a good example of that. Mainly hope I get good enemy patterns and hope I don't take too much damage. Health carries over from stage to stage, so it's important that I end with at least 4 health. I can finish with less, but I can't damage boost as much later on.

Stage 2 is pretty straight forward. Damage boost where I can. The cauldrons you can stand on them and not take damage. It's the bubbles that damage you.

Stage 3: This stage isn't too bad. The fire in the first underground area trolls me a lot. It's possible to defeat the boss in two cycles (two teleports), but he has to spawn low at least one cycle so I can hit him 3 times then 2 times the second cycle. I didn't get two cycle in a long time, so I didn't stress of that.

Stage 4 is horrible. It's easily the longest stage of the game. If you don't know how to navigate through the stages, you can get lost. There's branching paths and there's no indication you're going the right way. It's just trial and error. I should mention something funny... When I was going through this game for the first time, I didn't know how the elevator worked. I kept jumping to get the elevator to move up. Eventually, I found out you can just hold up. That made me feel really dumb. The boss is an asshole. Not much more to say beyond that.

Stages 5, 6, and 7 are essentially 3 stages in one. Stage 5 ends when you destroy the first turret. You might notice I only hit it 4 times then walk through it. For whatever reason, they made it so you could walk through the turret after you hit it 4 times. You can destroy it in 5, which is what I do on stage 6 so I avoid getting shot by the turret. Stage 7, I possess a piece of popcorn (I think it's actually a flower). This refills my health so I can be reckless near the end of the stage and the boss.

After I defeat the boss, it gets really weird. I start stage 8 teleporting and getting stuck in the air and permanently fixing my position there. Not sure why it happens, but I at least know how to do it. At the end of the fight, I go into the tree again. If that animation is interrupted by the cutscene, I finish teleporting in stage 8. I guess since you're not supposed to be able to possess anything in stage 8, it doesn't know how to handle it. Fortunately for me, it just so happened to give me a solid floor in the air so I can just walk right to the end of the stage, skipping really difficult obstacles. It also just conveniently gives me enough room to trigger the door at the end. Any higher and I wouldn't be able to reach the door.

The final boss is basically what made the run. He gave me a really good pattern. His teleports to my knowledge are random so he can be an asshole and not spawn forever.

Anyway, I did it. The game is done and I never have to play the game ever again!

Hope you enjoyed it!