Released in December 1990 for the NES by Athena, Sword Master is a side-scrolling action scene where you play as a knight, tasked with defeating an evil wizard and the evil demon he summoned. Lots of sword use in this one, as the name implies. Little bit of shield use too, but not too much. This isn't Shield Master after all. 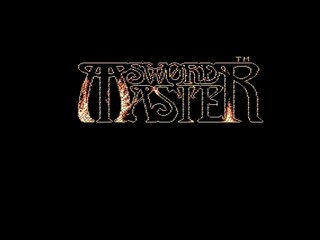 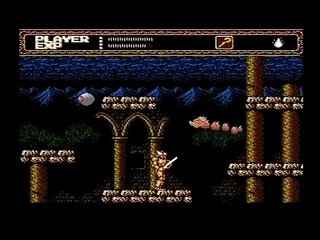 I decided to run this game mainly because i like it a lot and it kicked my ass when i was a kid.

This run is far from perfect, but making a perfect run is simply impossible since most of the AI is unpredictable and can drain seconds drom your run any time they decide.

As you can see i keep jumping, that increases the movement speed but also allows me to make 2 or 3 damage per hit to enemies. Damage comes from how many frames my sword touches the enemies. Bats and wolves die on 1 damage hit.

If i get one 3 damage hit on skeletons i can 2 hit them since they have 5 hp but i didn't get them (no big deal). The troll i can 2 hit every time since he doesn't move out of the way and the sword does good damage.

First glitch of the game is on the 1st level boss.
To be able to do this glitch I stay as far right on the screen as possible, so when the wizard tries to enter the spot where he would start blasting his magic, he keeps getting knocked back and takes damage as i swing my sword.

I start mashing start as soon as the boss dies, this saves quite a bit of frames since if you don't do this the game just keeps you in the forest and plays the "boss defeated" music.
Also you have to press start to skip most of the scene with the map that shows which stage you are in.

This is pretty straight forward, jump forward as much as you can and avoid getting hit.
Messed up a little bit where the 2 balls are before the boss, got stuck inside that wall and missed a cycle to go in.

Trickiness and luck comes in at this Boss, I have to make triple jumps to get to the other side of the knight which messes his AI up and allows me to hit him.
Triple jumping is quite difficult and i have to use my index finger to do it. Every time you press jump you can't hold the button for more than 2 frames other vise you can't perform another jump.

Also to get to the other side of him i need him to swing his sword as he did. If he doesn't and starts walking backwards i fail. This time got it on the first try which is great.

Got hit by a bat...
The Dino can be a bit trolly, I try to manipulate him into charging at me since you can't damage enemies when they are off screen. He does the charge and dies pretty quickly.

Frogman can chain jump kick and straight out kill me, but i got him pretty fast.

Knight is the same as the second level boss and i got the triple jump on the first try again.

I killed the knight too much to the left and can't get the glitch on the wizard.
When i kill the wizard this way he can troll me and teleport to the right side of me, but that is not the case and he dies almost as fast as with the glitch.

Lizard gets one kick in but no more so its alright.

I got the triple jump against the Axeman on the first try so he dies pretty much instantly.
He can't jump and for some reason he just decides to walk back every time i go behind him.

Nothing much to say here except that the boss went terribly, The second time i tried to jump slash him I apparently wasn't holding up. Lost only a second or 2 though.

Axeman doesen't cooperate as fast as he could but still dies way faster than with any normal strats.

Morning star guy does what he should and jumps him self onto my swinging blade.

Again I fail to push up and right and instead press just right against the devil. I blame this on the stiff D-pad which i should be used to. This time end up loosing more like 6-7 seconds there.

This boss dragon is extremely trolly and hard to back stab, so i blast him away with magic. Magic in this game takes away your XP, using it as Mana.

This whole stage is trivialized by the ceiling glitch.
I just double jump into a rock that damage boosts me into the ceiling super mario style. This also allows me to backstab the boss super easily.

7th:
1st 3 enemies are old friends. This time the knight doesn't cooperate at all and i loose 10 seconds compared to getting it on the first try.

The barbarian that was the boss on last stage makes another apearance, he is really easy. I wait for him to throw his axe the jump over it and keep hitting him, Nice thing is that when i push him off screen his axe that was following me boomerang style disappears and i don't get hit by it.

On the next 2 guys I encentialy sacrifice my HP to get them fast, what is accidental is that i get hit by a bat and get too close to dieing.

I was waiting for the white wizard to shoot a direct blast so i could hit him as the knight, but he doesn't and i don't have the balls to risk it since i am a one hit wonder, so i just blast him to smithereens as wizard.

The fire master comes in and OH NO I DIEEE?!?!?!
Well to be honest that was intentional, this death serves many purposes:

1st I was able to sacrifice my health to the 2 knights that Would suck up quite a bit of time.

2nd Im able to fill my hp for the final final boss as there is a check point here on the fire master.

Talk about a good day do die.

FINAL BOSS:
Try to to the uuber lighting as i like to call it but i lack 1 xp line.
So the fastest way to kill him is to throw your self at it, sacrifice your hp and hope for the best.
When i'm almost dead i take it slow and finish him off.

Hopefully this is not too tall wall of text, but i tried to explain things through