Based on the 2007 Movie, TMNT tells its story in a series of flashbacks. The mechanics focus more on the platforming than the fighting, and each turtle has a unique acrobatic move, adding more variety to the game. The game also provides a series of challenge maps to show off your speed. 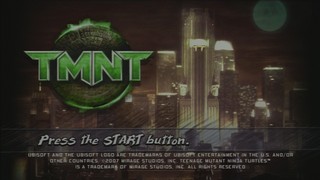 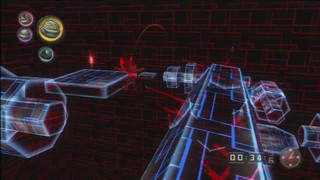 Speedrunner in a half-shell. Speedrunner power. (Nah, not as catchy.)

TMNT is a game that was released with the 2007 movie. For those not familiar with the movie, don't worry. The Challenge Maps spoil nothing. Go watch the movie anyways; it's much better than the 3rd live action one that came out years ago (although Secrets of the Ooze was much better than both).

There are 16 Challenge Maps in the game. In order to unlock one, you have to complete the corresponding main game level with a high enough overall ranking (I believe an A rank or better). Each Challenge Map provides you with a test of some type of obstacle course (or with maps 02 and 10, a quick skirmish with Foot Soldiers). Some of them you have to complete with 1 turtle, some of them you're allowed to use the entire team for throws and team attacks. Each map keeps track of time and you can earn up to 3 shells per level (these are used for unlockables).

Several of the levels have some serious shortcuts. The only one I think that was intended was Map 15, which I've found impossible to get 3 shells on without doing. The shortcuts in Maps 01, 09, and 12 I don't believe were intended, especially since the camera has a hard time keeping up (especially in Maps 01 and 12). The Team Attacks in Map 10 were done intentionally and given that the timer appears to slow down for the slow motion part of the team attack, I believe were intended by the developer in that map in the manner I used them.

Shortly after everything was posted in February 2014, a mistaken comment on one of my YouTube videos made me dig out the game once again, leading to 10 of the 16 levels being improved. Most of them weren't by a large margin - everything was pretty tight before. However, Map 12 got SMASHED. It's a hard stage, since I'm having to do a completely blind team throw towards a Foot Soldier. Not as easy as it looks!

Enjoy the (once again) improved videos. See ya in another 8 months? :P

Not much else to say other than...COWABUNGA!

This run is Copyright (C) 2014 Nicholas "Sir VG" Hoppe and IMAMYTH Colosseum (http://www.imamyth.com/ and http://www.youtube.com/user/SirVG) and is allowed for downloading and private viewing. Permissions for hosting this run have been granted to Radix and Speed Demos Archive. Public viewing of this run is prohibited without prior permission from the creator. The selling or distribution of this run for profit in any way, shape, or form including (but not limited to) selling on eBay and television for profit is prohibited without prior permission from the author. Video hosting sites (i.e. YouTube, etc) may host this video in part or in full, as long as full permission is granted by the author. Any violation of the above listed may result in legal action. TMNT is Copyright (C) 2007 Ubisoft.