Released in December 1998 in Japan and March 1999 in North America, T.R.A.G. is an action-adventure game developed by Sunsoft. There are four different characters to play as, each with their own unique ability, weapons and fighting style. Gameplay is somewhat similar to that of Resident Evil, with 3D characters moving across pre-rendered backgrounds most of the game. The player must infiltrate the Togusa building, which has been taken over by terrorists, and attempt to take it back while rescuing a scientist being held captive by them. 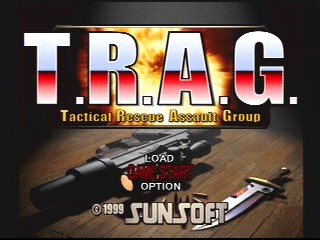 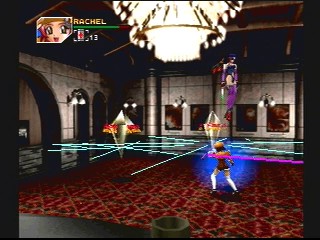 T.R.A.G.: Tactical Rescue Assault Group - Mission of Mercy (aka Hard Edge) is an obscure PS1 game most known for how terrible the voice acting is. So naturally, I decided to speedrun it. The game doesn't exactly control very well, as it uses the classic PS1 tank-controls, and you have to use the d-pad. It takes some getting used to, to say the least. A big aspect of the game are the 4 different characters you get throughout it, and they all have their unique strengths and weaknesses.
-Alex: Has a gun and night-vision goggles. Mainly used when i need to see in the dark
-Michelle: Fastest movement speed and very good damage, most used character after...
-Rachel: 2nd fastest character. Low damage outside of her counter, but she is needed to fit into small places a lot, so I use her often.
-Burns: Big and slow. Used for like 30 seconds total.
As far as speedrunning tech goes, there isn't much to say. I haven't found any helpful tricks or glitches, so the biggest part of the run is movement. You can actually get stuck on walls quite easily, so trying to avoid that is an important aspect. Aside from that, having good boss fights is a big part, and they can be pretty random. But we'll get to that later, lets talk about the run.

Intro:
I start the run out by immediately switching to Michelle, as she is much faster than Alex. In the second room, I have to wait for both robots to completely disappear before I can interact with the elevator. Lastly, it is important to have Michelle take the stairs instead of Alex. It works out to be much faster, not only because of Michelle's faster movement speed, but also because for some odd reason the un-skipable cutscenes take longer if you don't.

Floor 26:
Still Michelle. For the black spider-man lookin' enemies, I opt to use Michelle's up-kick rather than her power attack, as it takes less time to start up, and I can run past while the enemies are knocked down. Michelle's segment is the only one with puzzles, and you have to do a few. The dog statue one to get Key Card B is the first. After that, I press a few buttons, open a few doors, and come to a room with a safe in it. The combination is always 052, so I don't need to find the combination in game. I grab a medal off of the dead researcher. I need 6 of these altogether for a later part of the game. The next door I come to is the power room, and it is locked with a magic square. Any solution will do, I just happen to prefer the one the game provides me with. In the power room, I open all of the power doors on floors 25 and 26, as well as turn on the lights to another room. On the way to King's Bar, I go out of my way to grab 3 first aid tubes. The bosses in this game can take a lot out of you, so I grab them as insurance. In the end, I would of been fine without them, so future runs might wish to pass them. I also get caught on a wall before entering the bar, costing more time. Nothing too noteworthy happens until after I get the steel wire. Right before I get to the door to fight the scorpion miniboss, I get stuck on what looks to be thin air, which was pretty funny. As for the scorpion itself, I have a perfect fight. To start out, I walk up a few steps so I can hit him instantly, then get him with a down attack. Then I walk him into the corner and block. After I hit him again, I intentionally take damage, manipulating the scorpion to stay in the corner so I can finish him off. About blocking, Michelle and Rachel are the only characters who can block (which is why they do all the fighting), and blocking itself is pretty interesting. After you block an attack, you become invulnerable for a fairly lengthy period of time, allowing you to hit back with a powerful attack. However, keep in mind that you can't block forever; after a few seconds of holding block, you will fatigue yourself, freezing your character and becoming a sitting duck for incoming attacks. After that, we just have some cutscenes to watch, and it's on to floor 25. Also, we got Burns at some point, but you might not have noticed, as he is useless.

Floor 25:
A lot more straight forward than 26. As Alex, I do the rooms in a specific order in order to cut down on screen transitions, saving time. Once I get Rachel, I use her for the remainder of the section. I make sure to open some doors and swap the Battery Unit around, giving me the most straightforward path through the floor. I get stuck on some walls and have a lot of trouble entering doors. No major mistakes, but a little sloppy.

Gasshu:
After the amazing freezer room cutscene, we can now fight the first boss. But before that, I go get my first disengagement device, cuz I'm in the neighborhood. Then I go get the system disk from floor 26. Interesting thing to note, in the jukebox, there i a song titled "System Disk." The system disc is not in this song however, preferring to reside in the smash hit "You & I." Now that that's outta the way, we can get to the boss. It's best to use Rachel, as her counter tears him to pieces. Rachel's counter is by far her most effective means of dealing damage, but that is offset by the fact that you have a relatively small window to actually hit with the thing, and you essentially have to guess when to counter due to the bosses random attack patterns. The actual fight itself goes really well though. Aside from the four grabs he does at the beginning, Gasshu gave me favorable RNG. I give Burns the spotlight at the end, because if he gets the last hit, Gasshu dies now, and does not come back later in the run, so I effectively skip a boss by doing so.

Cassandra:
After Gasshu dies, I have to sit though some hilarious voice acting for a while, and then I get to choose who fights Cass. Naturally I choose Rachel, as she is the only one who stands a chance. The beginning of this fight is a bit rough. Cassandra has two attacks I can counter, a fast slash, and a combo attack that has a longer start up. There is no counter timing that covers both, so I effectively have to guess. And I do mean guess, this boss does whatever she feels like. Anyway, I guess wrong a couple times, and get beat up for it. However, despite how it looks, this was one of my fastest Cassandra kills, so I think it went pretty well. Also of note, during this fight I manage to use Rachel's super secret 7 hit combo. This combo is unlisted in the game manual, not mentioned in a single walk through, and I have yet to see it in any other video. It is Rachel's most damaging attack, but actually performing the attack is a challenge in and of itself. As far as I know, you have to do a 360 motion at some point during your normal combo, and hope it comes out. Naturally Cassandra teleports away and I wiff the whole thing.

Vault:
This stretch is easily the roughest of the run, all of my real mistakes are here. Firstly, I mess up character switching twice, losing a few seconds each time. I have some sloppy movement as well. I also miss two crucial counters during the Vault fight, messing up the quick kill. Vault seems to do the same pattern each time, so this was a pretty dumb mistake. On the positives, I alternate between the characters because, aside from Michelle, they all have certain context sensitive actions they can do. Rachel can go down vents, Burns can move the heavy crate, and Alex has night-vision goggles. I use Michelle between them as she is the fastest to get from point A to B.

Brennum:
After we beat Vault, we should have all 3 disengagement devices, so we can open the plasma door on floor 26. Once we get there, the game gives us an hour time limit to deactivate a laser or something, the story isn't exactly clear as to whats going on. The time limit is quite generous, as it only takes me ~30 seconds to turn it off. After that, I intentionally take damage on the big wheel robot, making it go away. Now I head straight to the basement to fight the last two bosses, the first of which is Brennum. I use Michelle because her power attack does around the same damage as Rachel's counter, and timing a block is a heck of a lot easier than timing her counter. That knowledge doesn't keep me from mistiming a few blocks, however, so I end up taking unnecessary hits. Throughout the fight, Brennum will randomly decide that he is in need of some cardio, and starts running around the arena. This takes time, not ideal. I would of liked to have killed him with only two runs, but he gets 3 in. An average fight, not the best.

Miguel:
I finish it off strong. On the way to Miguel, you might notice a red room. This is where you would rematch Gasshu had I not properly disposed of him earlier. As to Miguel himself, the fight goes really well. The first thing to note while fighting him is that his entire body can damage you, including his tail, which is his weak point, so you have to be pretty careful. After a couple attacks, Miguel will start to spin around, preventing you from damaging him. He's still vulnerable mind you, you just can't get a swing in edge wise. After he's done spinning, I go in for the kill. I do wiff some attacks due to poor spacing on my part, but any Miguel that gets the kill before the second spin is a great Miguel in my books.
In conclusion, this was a good run and I had a lot of fun doing it. It's not perfect by any definition, but seeing as my goal was sub-58, and I got sub-57, I'm pretty satisfied. I'd like to thank the guys who sat through me streaming attempts of this game; it's one thing to watch TRAG, it's another thing entirely to watch hours of TRAG resets. Despite this game being... less than good, i think it's a really fun speedrun. Something of a fine wine of bad games, I highly recommend giving it a play through. I hope you enjoyed my run, and thanks for watching :)