Temple of Elemental Evil is a 2003 adaptation of the Dungeons & Dragons campaign Greyhawk. It's the first game based on the 3.5 ruleset and allows the player to completely ignore the big bad evil by stealing her crown jewels. 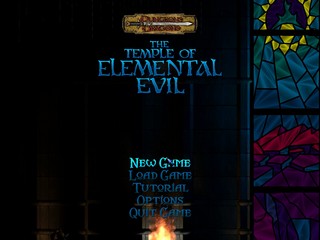 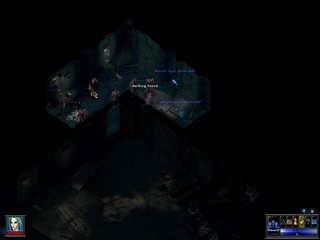 Temple of Elemental Evil is an old D&D-based RPG - not made by Black Isles, and therefore much worse. I picked it up with the intention to break it, and within 2 days I set a 8:30 record. Further route improvements, smaller tricks, and the discovery that you can hotkey abilities eventually lead to this run.

Where I used to take two characters, a rogue for lockpicking and a Sorc for Identify, my latest and probably perfect route doesn't need lockpicking and otherwise never benefits from a second character to pay off for having to kill them later.
I use two glitches in character creation: Firstly, for some reason, you're able to unlock the number of times you've Rerolled as a number that fits inside the stat boxes. Then, for some other reason, you're able to place numbers into the boxes in the Basic tab, while in the Advanced tab. As a result, I get a Sorc with 60+ Strength, 18 Dex, and high Int. The Strength is specifically catered to make my attacks to do around 40 damage, and the Dex/Int just need to be as high as possible to aid my hit chance and my chance to spot hidden passages without having to Search, saving minimal time.

Our first step on arriving in the village of Hommlet, after shooing a pesky drunk, is to recruit the local "locksmith" Furnok, only to immediately murder him and steal his Ring of Invisibility. With this ring, I will be able to run through the whole game without ever needing to engage in combat.
Our second step is to find the map location of the Temple. This we get in the Moathouse by beating the bandit lord Lareth to low health, accepting his plea for mercy, allowing him to lure us to the Ruined Tower where he has an ambush in wait, then killing him before we reach his buddies. I intentionally step behind him to be just out of combat aggro range of the lookout - since we only have 3 HP, that guard has a habbit of killing you in one swing.

Once at the Temple, we go through some not-so-secret passages to find the Golden Orb, then backtrack to the top floor with a keybound Flee Combat (cause apparently you don't even need to be in combat to flee it) and then move into the lair of the resident archdemoness Zuggtmoy. In order to banish her back to the Abyss, we... steal her jewelry from the throne, and the game ends then and there.

The run isn't completely perfect, but the pathing in this game has a tendency of being completely idiotic and any run that fails after the Moathouse requires me to restart the game (and be forced to rebind all my ability hotkeys again) because the secret passage in the Moathouse for some reason disappears after one use until the game is restarted. Running this game started becoming as frustrating as playing it normally, so I'm happy with this time and to leave it behind me forever.