Released in December 1996, Terranigma was a rare breed, a game released in Europe that wasn't released in America! The game is the third part of a loosely related trilogy that began with Soul Blazer and Illusion of Gaia. You play as a young man named Ark, who opens a forbidden door and ends up unlocking a whole planet which he eventually learns he must save. 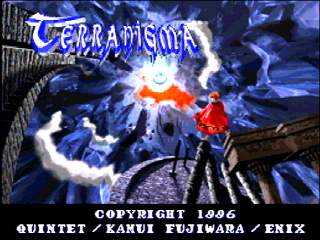 Let me start by apologising for the delay in finishing this run. It was an unfortunate coincidence that I reached some of the hardest sections of the game at the point when I was doing exams, followed shortly by starting my summer job. It was hard to motivate myself after 8 hours of data entry to get owned by the security robot for the 100th time ^_^. I originally started this run back in January. My dad was about to chuck out our old VCR due to a seething hatred for the thing. After saving the poor beast I wondered what I should actually do with it. Speedrunning seemed like a good idea, but it needed to be a PAL game, so I figured Terranigma would be a good choice as I love it to bits (yes, even after spending months repeating bits over and over again) and because it's one of the few games where PAL would be considered the standard version.

I must thank a couple of people before getting into the gameplay details. Firstly I want to thank Saturn, as his knowledge of the game helped me many times. His various emulator playthroughs helped greatly in deciding where to level up. I want to thank Strangeness for encouraging me to redo my original run, which was 17 minutes slower, which resulted in a vastly more polished run. Enhasa also encouraged me not to let the quality slip when I got fed up of segments, and Jam was there for me when it all got too much. Last, but not least, thanks to Radix for hosting my run and Nate for capturing it from the tapes.

Anyone who's played Terranigma should understand how the level up system works. Put simply, below a certain strength stat, you will deal very little damage to enemies. As soon as you exceed that str. value the damage you deal rises rapidly. As such, a boss can take forever to beat on level 18, but die rather quickly on level 19. This means that planning what level to fight each boss at and where to gain these levels is a very significant part of a Terranigma speedrun strategy. Much of the 17 minutes saved over my initial run were due to better level up locations. I believe I fight each boss at optimal levels, though there is possibly still room for improvement in where I actually level up.

My money route is one area that time could probably be saved. I need to have 6660 gems by the time I reach Mosque in order to buy the RedArmour, which boosts strength by the equivalent of 2-3 levels. I miss out on quite a lot of money dropped by enemies, but also make a few detours to collect money chests, so a minute or so could probably be saved here. There are a few more ways I reckon time could be saved, most of which I mention in the segment specific comments.

I hope you enjoy watching my run. I don't intend on doing another segmented run on Terranigma, but I may come back to do a single segment run at some point. If you want to contact me I'll be on the message boards, or you can email me at AlexMcIver@gmail.com, though I don't often check my emails.