Released in March 2001 by Squaresoft (now Square Enix), The Bouncer is a relatively short action/beat 'em up RPG game. You play as Sion Barzahd, Volt Krueger, and/or Kou Leifoh, bouncers at a bar on Dog Street, setting out to rescue Sion's girlfriend Dominique from the ruthless CEO of a powerful company. 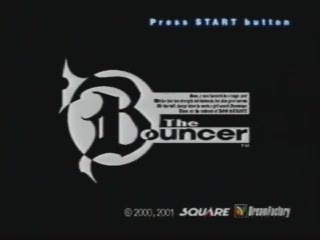 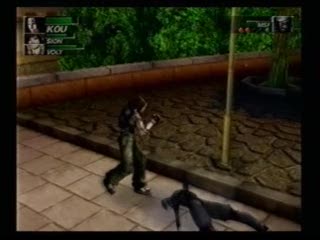 Note: The timer on the Kou run switches from 0:19 to 0:20. The run counts as 0:19 because there is no control over the character at this point.

Single-segment as Sion 0:19 by Arthur Boelter.

First off, happy 22nd birthday to Nate, since this run was completed on his birthday; unfortunately, I forgot it was his birthday until about a week later. (Sorry!)

Secondly, this is my first full game speed run; that's not counting a run of Mega Man 3 on MMAC I did almost 2 years ago that I deemed craphola and my Sonic 2: Death Egg in 54. Yes, I'm still attempting MM3 if anyone is asking; it's just temporarily on the backburner.

Since Sion is the first character amongst the trio, it seemed only natural to run through the game with him first. The only special move I get for him is the Torpedo Kick. Afterwards, I raise the power attribute (for power is strength, strength is knowledge, and knowledge is power) until it's maxed out, then life just to be on the safe side. This goes double for Volt & Kou's runs, replace the Torpedo Kick with their special move of choice.

Humorous highlights in my opinion are:

I've decided that I'm not done running this game yet, as I am working on low % runs on this and my other two Bouncer runs (open for discussion on the forums). I may also, if it's possible, do 100% runs in the same fashion (New Game + anyone?)

Until then, sit back and enjoy!

Single-segment as Volt 0:19 by Arthur Boelter.

This is my second Bouncer run; I completed this one 10 days after my Sion run. This run got the axe several times on previous attempts, the most insulting being accidentally selecting Sion against Kaldea (oops), and getting my ass kicked by Dauragon in the final battle when I only needed one more hit to beat him (oh so humiliating). Volt is the strongest of the three, but also the slowest. The only special move I get for him is the Shoulder Uppercut; it does massive damage, especially against the LD-xx bots. It's also the most expensive of the 1st special moves at 960 points (Sion's Buster Throw is 400, Kou's Heel Smash is 320), the earliest I get it is before I face Echidna the first time.

Sit back, and enjoy!

Single-segment as Kou 0:19 by Arthur Boelter.

Kou was the last of the three of my Bouncer runs and I finished it after taking a breather after completing Volt's. I would say Kou is yang to Volt's ying, fastest but weakest. The Circular Uppercut is the cheese for Kou, as he can juggle opponents with it if utilized effectively (can you say "boingy-boingy-boingy..., hence the Wakko bashing). It's also the cheapest, the earliest I usually get it is after the 2nd battle; unfortunately, I was a bit short on experience so I got it after the 3rd.