What was meant to be Infogrames in 1995 continuing to milk it till it bleeds through every udder, the old engine from 1992's original 3D survival horror, Alone in the Dark, just caused it to collapse with a heart attack instead, evading commercial success. Poor marketing and aged (though historically accurate) looks were the doom of what is generally seen as a prime sample of sequelitis, alongside the usual clunky interface, and unusually clunky plot development. Despite this, not exactly the low point for this genre. 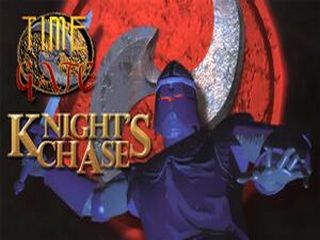 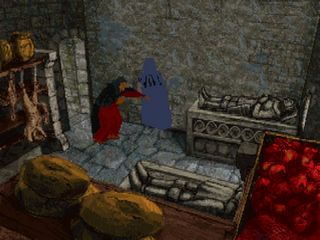 The DOSBox settings for this game should be fixed 80000 cycles with core = auto.

Time Gate: Knight's Chase  is a Dos game published by Infogrames in 1995, it's a mix of action & Puzzle similar to Alone In The Dark (1992), In fact the game engine is the same. Playing as William, the goal of this game is to find and deliver his kidnapped girlfriend Juliette. Starting in a museum to find some clue where William is trapped, thrown in a well and sent back in the year of 1329. After finding Juliette, he needs to use the glove of time to go back to his modern time.
Some glitches are used throughout the run, they are all kind of similar: using the menu as a pause buffer to drop an item at the right frame to change the main character state where he is about to die or when he cannot move.

Here are the general time saving in the game:
- Skip cutscenes (video and in-game) with ESC key when possible
- Faster fight using the bare fists, it has DPS, except for few parts
- Minimal menu navigation, try to use items as soon as possible
- Only pick up items that are useful to progress, sometimes no choice because they are on the way

General Improvements:
- For almost all level, the running can be improved, I got stuck on some walls or corners, I might be able to practice a bit and save like 5 - 10s on the run

Go to the museum's garden, get captured while searching for Juliette and get throw in a well that makes him travel back in time
- 1:07 - equip the screw driver to save time, william will automatically open the door as soon as he touches the door
- 1:47 - munitions are required to use the catapult. Getting them first will save some time as the black knight is getting closer to william, the fight will be faster, just turn and hit him with the punch. For this part I did well, we are trying to avoid any knock bar from the black knight.
- 2:03 - Catapult Glitch - Using the catapult right before touching the laser will cancel triggering the alarm and william can walk through it

Get out of the jail and find the secret room where the hologram and a book is kept.
- 4:05 - that's one time we are using the sword, for some reason the punches are slower during this part
- 4:39 - this blind man will call the guard if william gets too close to him, that's why we need to wait a bit before opening the door
- 5:38 - one annoying part of this run: the wooden beams! Camera angle are bad and it's really easy to fall, I got many run reset here

Get the first gem from a book and put back the book and a wooden box back in the iron cage. After that follow a monk to a next room
6:05 - leaving the hologram will skip one cutscene after opening the door
6:52 - normally we would need to copy the book, but the game doesn't check it so we can skip it
7:18 - for this part, we need to follow a monk closely or a guard will catch us and kill us. I'm using a glitch to be able to move when the guard catch him, so I can run quicker to the door

Collect the other gems and donate them to the statue
- 7:55 - mixing the ingredients to make a sleeping potion. Entering the menu as soon as the item is selected will skip the animation when William does the mix. This animation can be seen a bit later when William apply the sleeping potion in the bread
- 9:05 - Usually we would be able to exit the door without the guard blocking us and continue to the next gems, this time I was a bit too slow and I couldn't find the keys quickly (super not visible)

Get out of the torture room and find a way to the cemetery through the library
- 10:56 - a glitch to move while the old templar cutscene. Drop the strange red stone, then use it in advance when we put in the bag and show the ring for the old templar to let us pass and die (drop a cross which is needed later). While the old man is dying, we have time to open the door with the ring, saving some time on the menu navigation.
- 12:03 - Saving time by avoiding the fight with the evil monks. The second monk stop moving when he touches the kitchen wall

Get to the top of the tower to the diamond on the statue and get the horn
- 12:56 - going back to the donjon, normally we would need to kill a fake lizard Juliette with a knife and the cross. But the doesn't check it so we can just skip it by going in and out of the door.

Get out of the cell and fight the only boss of this game
- 14:52 - using the punches would be faster but less chance to get hit using the bronze mace
- 15:03 - running while the executioner is dying to save some time before the cutscene appear
- 15:32 - I hate those camera angles for this part, I'm always hitting a wall
- 15:57 - maybe using the punch instead of the mace might save some time

Find Juliette and remove the curse / painting on her
- 17:37 - again, while mixing ingredient, opening the menu as soon as william use an item will skip the animation

Kill wolfram and use the glove to go back in the present time. The end!
This part is mostly running, nothing interesting
- 19:43 - smashing pause & unpause button while pushing with slow down the fps and make the pushing faster