Released in Japan in February 1995 and in North America in April 1995 by JVC and Victor Interactive Software, Timecop is a spinoff video game based on the movie of the same name. You play as the Timecop and your objective is to prevent the original inventor of time travel from screwing up the past and future. The game pretty much speaks for itself as far as the gameplay is concerned. Just watch the runs. 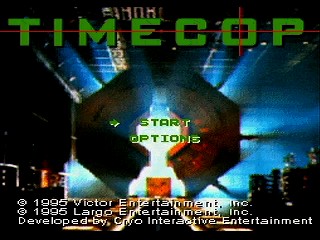 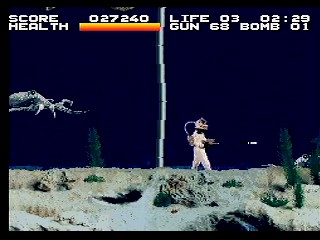 I'm going to let the game speak for itself, for the most part. The only extra trick I'll refer to as the "glitch jump." This involves pressing jump on a certain frame during the end of cutscene transitions, and the actions will occur during the "opening" for the following stage. Saves a very minor amount of time with the exception of the one before Sky High, which would actually move you up an additional level.

FBI GET ON IT
I missed the glitch jump at the start, but that tends to screw things up more often than not. I need to finish with exactly 3:11 on the clock to influence the platforms in the next stage.

Floormaster
Hit a great elevator pattern, although not perfect. Normally I'll be pushed away from the ledge when I land on that second level, but it didn't this time which allowed me to keep up with the cycle.

Roundabout
Just a really long stage. I didn't get as many of the sentry jumps as I would have liked, but otherwise the stage went by pretty well. Skipping the clocks save time at the end where time counts down.

TIMECAR
Great stage. I wasn't knocked back at all and things went as expected.

Octopus Parade
Some really silly mechanics in this stage, but for the most part it went fine. I recovered HP when I needed it without turning around. Skipped the clock again. Some periods of bad lag hurt this stage, but I think only by a second at most.

Reverse Touhou
Nothing to see here, move along.

Gangsta Paradise
I have several strategies for this stage depending on how well I'm able to go with my strategy, but everything went pretty well this time. This is a very difficult level since all of lower window gunmen are very difficult to get around.

Low Rider
This stage is much easier than the last since all of the enemies are in the upper parts of buildings and there are less of them. No issues.

ATM
No big issues here. Got caught on a couple of the wandering guys, but otherwise fine.

GERMAN
Managed to get the glitch jump. The stage itself went fine although getting hit by the tank mortar costs some time.

Brainblast
To be honest, I don't have a strategy for this stage. I just run and pray. It works out most of the time though. I got hit back once, but otherwise the stage was fine.

Timecar's Revenge
I also don't have a strategy for this stage, but it's more consistent than the previous one. Got hit back a couple of times, but some lucky big heart drops kept me healthy up to the end.

Super Scroll
This is the major RNG stage of the run. The conveyor belts switch whenever the RNG hits 256 (changes on every frame) and I can't really predict it. Ideally I would be able to move past the scrolling for both platforms since they don't spawn yet, but I was only able to get the second one which is more important.

Corner Trap
I have a pretty good route for this stage and it went well. Could have been slightly better, but 2:31 is an above average time for the stage.

Sky High
Didn't get the glitch jump at the start which saves 2 seconds from skipping a platform. Otherwise I reduce the lag where possible and the rest goes well.

Jetpack Hug
Setting up the hug was a little sloppy, but ended fine.

That's Timecop. I probably won't revisit it, but I imagine with perfect luck and some other optimizations another 15-20 seconds can be saved. I'm satisfied with this run, though, and I hope you all enjoy watching it.