Released by Konami in 1993, Tiny Toon Adventures: Buster Busts Loose places you in the role of the young blue rabbit as he battles his way through a variety of locales and square of against several familiar antagonists from the television series. Featuring varied enemies and gameplay, this game is generally heralded as one of the better cartoon to game ports of the generation. 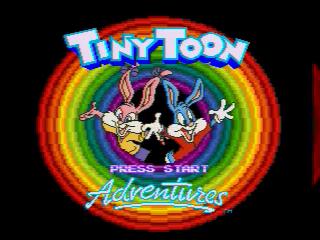 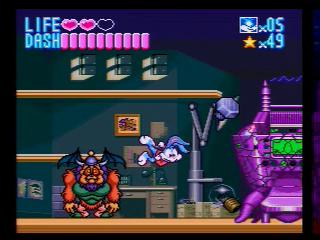 Runs on the Japanese version:

Most of the game is missing in this difficulty. Pretty lame, to be honest.

This is a pretty clean run with no major mistakes.

The only point about the run I'd like to make is that getting hit at the end of the football stage is intentional.
If I didn't get hit, then the game would count down over 100 bonus stars, wasting a ton of time.

I want to get a better Normal difficulty run to submit to SDA, but the run is very luck based and I got very good luck in my personal best time.

Someone said in the forums "Is it just me, or is Buster humping air for the entire run?" This is true, he is an air humper.

Introduction:
This is my second speedrun, at SDA. The first being World of Illusion, another 16-bit cartoony game. Like a lot of games for in that generation, games were different depending on which console they were released for, so the Genesis version is totally differently, features a world map and plays like a generic Mario/Sonic game while the SNES version is more or less segments from the show combines without any relationship between the stages.

Like my other projects my motivation for running this game draws from childhood memories, and this game not having a published run yet. Before I go into the level breakdown there's a few general things about the run you should know.

I play the Japanese release. When I first played around with the idea of running Buster Busts Loose I practiced on emulator with this particular version. When I practiced the mini-game selection I initially did it by ear and waiting for an audio cue. However this did not work for me so I scrapped that after a few months. Soon thereafter I just happened to find this cartridge on the Swedish equivalent of Ebay so I figured now is a good a time as any to get it! American carts are pretty rare to find in Sweden so if I was not going to scan Ebay this was my best bet.

Version and difficulty differences:
There are some differences between versions, the text scrolls a little bit faster, and during stage 3-2 a few enemies are "missing" compared to the American release but I think that's about it.
There are three difficulty modes:
Child: Skips alot of segments and bosses.
Normal: You start with three hearts.
Difficult: You start with one heart and bosses take more hits to kill.
I play on Normal because I think the game is already random enough and out of all my failed attempts, none was ended of me dying from taking damage. Only falling of train-carts, getting stuck in walls, running too fast out of the screen and killing myself and of course the mini-games... Also the game would not be more enjoyable to watch.

Notable information about the game and speedrun tricks:
Mini-games are the big thing about the run, if you don't get Hampton. The run is over; you lose something like 40-60 seconds depending on what mini-game you get. And there are five mini-games, one between each stage. BUT, as shown it is possible to select which mini-game you want! I have not done enough research to say this for sure, but I think it's a 4-frame window. You might now think that 4 frames are plenty and I don't disagree with you, but there is no good audio or visual cue for this! But the wheel at the same position every time, that's at least some comfort.

First few frames are Babs. Next few frames is Plucky. Then there is Hampton. Spamming the button for selection is not an option and even with a turbo controller (Yes, I've tried this!) you cannot land Babs with certainty. The only option is to follow your gut and wait just the right amount of frames from the time when the arrow shows up and hope for the best. In the end, I got pretty good at the timing but my nerve killed 10 or so runs at the last mini-game because I could not keep my cool.

You can go out of bounds with Buster, which I do at level 3-2 and 6-5. This is simply because the walls do not extend outside the screen. Very helpful for me!

There is an infiltrate jump glitch, but I can't do it consistently enough to use it in a run. The only places you can benefit from it is in the later stages, and if you screw up the tricks once or twice, you will not gain any time. It works because the game resets Busters jump the frame after you cancel a dash, so if you jump, dash in the air and cancel this dash by facing the other way, there is a one-frame window where you can jump again.

Bosses are all random, some can be manipulated to an extent. Like the first boss, I can get him to fall in the same pattern all the time. Third and Final boss, they are also run killers.

School's out!
Not much to say could have been maybe 0.5-1 second faster. Boss great; he does what he is supposed to.

Back to the Wild West Steakhouse
I hate this level so much; I start out by walking so I can dash into the barrels and with the same dash-slide get the other barrels. Got lucky in the bar scene, looks sloppy but it turned out to be a good time. A mess up the mini-boss, could have been 1 second faster with better execution.

Hey Look at me! I'm a Zombie!
This level has a lot of cool tricks, and man they are hard to pull off! 3-1 goes fine, 3-2 room is also good, I get the run-bounce-jumps from the trampolines without having to get the counterweight and get the wall skip without getting stuck in the wall and killed… (Damn troll game!) 3-3 has a very hard trick which involves running on a moving hammer, if you miss this jump by just a bit you will either take damage from the hammer, or you won't be able to jump away from it. Both cost about 5-10 second and makes the trick not worth doing. The rest is good though, I play it a little safe. The boss is the worst part of the run, he just does not throw bolts, and then I can't kill him. (At this point I had given up this run but kept going because it was the last run I would have time for during that session.)

I wish this there was a hockey...
Not much to say, it's ok… And random! I've done this segment a few seconds faster before.

Wanna go high?
Oh yes, more auto-scrollers. I pull of a little trick here in 5-2 where you jump right at fade-in and don't have to wait a few seconds for the new balloons to spawn. Not much more to say here. 5-4 has killed a few runs before, not because I screwed up, but because that the game might kill you randomly if it feels like it.

Da-da-da-daaaa-Daa-da-da-da-da-Daaaaaa!
It's a good level overall. I take the hard course and ace it. But here comes the highlight of the run! The boss fight is perfect! Frames were saved, pixels were cropped, hallelujah! This fight is so perfect that I doubt I can every make it any better ever again.

Time:
Sub 24, it's a lot better than I every thought I would do!

Final words:
ESA2012 sparked my interest in running this game again. Before that I had not played Buster Busts Loose for a couple of months. My DVD-record ran out of memory 3 minutes after the run was finished. I'm pretty sure I would have given up if it was the other way around.