The Super Nintendo game was released by Hi Tech Expressions in 1992 in the US and by Altron in 1993 in Japan. The player controls Jerry, the mouse, as he traverses through four different themed worlds - a movie theater, a junkyard, a toy store, and a house. Tuffy (originally Nibbles) is playable through second player. Jerry or Tuffy use marbles as weapons. At the end of each world, Jerry goes into a battle with Tom, the cat. 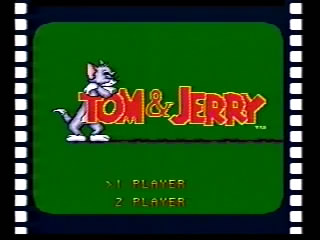 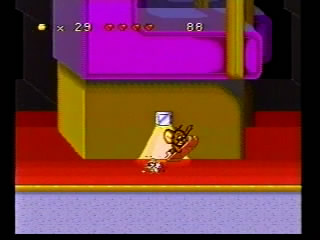 I have always enjoyed this game, mostly for the fact that you actually get to be in Jerry's shoes, fighting against Tom. It's like experiencing the world like the family did in "Honey, I Shrunk the Kids". Throwing marbles (they look like peas, to me) in this game is very handy, and is utilized throughout a lot of the levels to take out pesky enemies that are just too annoying to dodge, or would waste time if I jumped on them. And, of course, you have to use marbles to defeat Tom.

Couple of mechanics of the game to discuss:

The main problem I have with this game is the sliding physics, especially in the world of the Lego blocks. I swear stopping on them, or even just standing there for a second to jump, it's like being on an icy surface. This has caused many a death, but thankfully, this run is deathless. Jumping in this game depends on how you time your next jump. If you land and time the next one well, you jump higher. I think if you're also still moving and just hit the jump button, it's the same, but the former refers to just standing still and jumping. It's something that took me a bit to learn, since there are some places at the very end of the game that require precise jumping, or I'm dead. Also, with the marble throwing, if you've never played the game, you can throw them straighter by hitting the A OR X buttons, and it goes slightly diagonal up when you hit the Y button. This makes it difficult since that means most enemies on the ground can only be killed with the straighter one.

Not much to talk about in the first stage, as that one is pretty self explanatory. The second level I used a couple of shortcuts I made up to cut down some time. There was one jump near the end of the level where it looked like I could probably make it up, but with further testing on that a couple days before I wrote this, it didn't work no matter where I jumped. It's hard to explain exactly where that jump is, but hopefully some of you can catch it. Normally, jumping from very high places would instantly kill you, but luckily one of the high jumps in this level isn't incredibly high, and the fall at the very end of the level doesn't kill me because I land inside the exit itself.

The third level is a pain because I do have to dodge a lot of stuff that you can't actually see until you're right on it, most of the time. So, a lot of that damage is hard to avoid, but none of it costs time, and I never get hit at Tom anyway. The Tom fight went very well. There is no way to hit him more than once when you first see him. Also, you can only hit him again after he stops blinking, so I'm not sure if I hit him three times on every pass, but he goes down quickly, nonetheless.

No glaring mistakes in these levels that I can really see. I thought they were very well done, and I especially like my fast kill of Tom. That's right, take damage like a mouse (man), Jerry! The last level here is horrible with the maze part, since if you try to just fall down the wall, and try to get in the opening, the game won't allow you most of the time, so you keep falling like it's all just one solid wall... That's why a couple of those jumps are a little careful, but waste no time.

What I hate about this and the next world the most are the springs I have to jump on to progress in certain areas. Springs are tricky; because you have to time those jumps, which is not as easy as it may sound. Obviously, the better you time the jump off, the higher you go. I suppose in a few places I could have done a smaller jump, instead of going really high, but that really only wasted a second in that one part. I have died many times because I couldn't get the perfect jump off the spring for a longer jump, so I guess I was paranoid. That's really my only gripe about the level designs in general. I am happy I was able to maintain my pattern in the Tom battle.

As with the world before this, damn those springy jumps I have to make (in this case, they're toasters in the first level). If I didn't time those perfectly, I would have died. The second level isn't as much of a pain with springs, even though it looks better when I get more of those spring jumps on first try.

The last level is such a pain, only because taking too much damage here is not what I want, so I can survive all three Tom battles. These are probably the better battles I've gotten on Tom of all my recordings, especially when the rest of the run is this smooth up to here. It's harder to get all three hits on Tom each time he appears here, but I do my best, with preserving as much health as I can, even though I probably could have taken a little more damage on Tom to save time on a hit. I hate when a hit doesn't register on Tom, though... Some of those hits I swear should have counted!