In march 2000 Tomb Raider 3 was rereleased in a budget "Gold" edition. As with the previous two games this also came with a set of bonus expansion levels. Set after TR3 itself, Lara finds out about the presence of a fifth meteorite artifact and goes on the hunt for it... 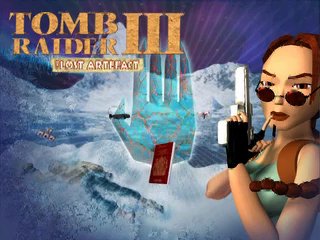 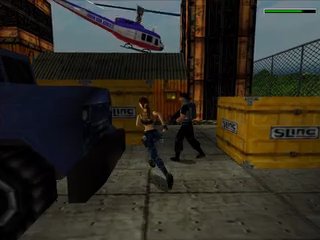 Category note: Runs with glitches and no glitches are separate categories.

After finishing my new glitchless Tomb Raider 3 run I decided to check out Lost Artifact; it turned out it could be finished very fast and wasn't too difficult, so I decided to go ahead and run it since it wasn't too much of a commitment, and I went glitched to speed things up even more. Another motivation is that it was the only Tomb Raider that hadn't had a full run done at all (and was the only one not filled out on the timetables at www.TombRunner.net).

Thanks to all the SDA staff, everyone on Tombrunner, and anyone else I forgot.

This run is glitched, the glitches I used (not all the ones possible) are:

Cornerbug and Flicker Motion: There are many (emphasis) ways to embed into corners in the original five TR games, the way the engine works means you "teleport" to the top of the block it is being used on (although not always; sometimes what happens is more arbitrary and random, like triggering certain things before you are supposed to). Flicker motion is a special cornerbug that allows motion while "stuck" in a ceiling.

Fence Bug, Block and Crack bug: Certain textures seams can be jumped through, allowing you to essentially go through some walls and corners.

Trigger Skip: Jumping around certain corners the right way (there are other methods too, but that's what I use in this run, it's also a sort of extension of the crack bug), you can avoid triggering certain things that would otherwise cause you to lose time.

I also use many different cancels and optimised forms of movement to save time, for a detailed breakdown (for the glitches above as well) go to the Area 51 section on www.tombrunner.net although I should note it's missing a couple of things.

You can see a white wireframe in Lara's hair (also in my glitchless TR3 run), this is a bug with anti-aliasing, but I think the visual improvement is more than worth this small issue. At the start of each level you cannot save while the loading screen is fading for some reason (unlike TR3 itself), so I have to make moves as the next level is starting before I save. Note that every time I save I lose three seconds.

Now the level comments. I list the name, part (video to download and segment) and the level finishing time. All comments are chronological:

Highland Fling - Part 1 - Time: 3:53:
When I bash the wall before falling in the water you can sometimes get turned right into the passage further, but it happens very rarely. The mounds seem to boost you slightly, so I tried to get pushed along by them. Climbing on the slope can be very random and is possibly the hardest thing in this level. After pressing the switch it may be slightly faster to side-flip on to the slope instead of jumping forwards, I should have compared them, but if there is a difference it's only a few frames at the most.

When rolling out the sprint on the way to the quicksand part I hit a slope and got taken off course a little, which slows me slightly. Going through the quicksand I walk into the corner for a boost further, sometimes a Crow chases you into the quicksand area, but you can kill it pretty easily most of the time. After the crawlspace you can sometimes grab right on the slope rather than going slightly above it first, but the difference is only a few frames. The two-roll cornerbug is the second hardest part of the level.

You can not stop before the cornerbug to the slope, but it can be easy to position wrong there. After getting the second Thistle Stone I intentionally drop down to the slope from the right as going for the centre makes the fall go wrong for some reason. I was apparently lucky with the Guard at the end, as he shot me a couple of times and then went off somewhere.

Willard's Lair - Part 2 - Time: 2:00:
This level was a nightmare to run, it's quite possibly one of the hardest levels I've ever had to run; despite being very short it's a non-stop onslaught of precision tricks and luck. The moves I took before saving were later discovered to be slightly sub-optimal, as taking the right course allows you to jump right on to the flares instead of sliding into them, which lost me a second or two. These flares are the only items I need to pick up throughout LA.

The amount of health you lose going through the spike wall varies a lot due to subtle changes in how long you spend in the wall; I crash into the wall intentionally to make it more consistent. The Dog at the second cornerbug led to the discovery that an enemies initial AI seems to be determined by position of the camera, it doesn't help make this much less random though, I got the luckiest AI this time. The cornerbug can be done in one crawl, which is the only mistake.

You can skip half the book maze by jumping to the right tile, the camera helps for the first trip as sprinting from the right place lets you run straight in to the room with the final trigger tile. On the way out its better to use the normal camera though. The end is the reason this level is so sanity-destroying; the Dog is completely random and will almost definitely kill you if it wants to, I found a route that makes it slightly more passive, but it only helps a little, and most attempts that got this far ended here, so all you can do is run the (already random and difficult) level until it lets you live.

Shakespeare Cliff - Part 3 - Time: 2:57:
After shooting out the grate I use a trigger skip to avoid turning on some flame traps and having to wait for them. At the drill pit jumping directly to the ladder is about two frames faster but loses a lot more health, so I decided to take the very marginally slower path and need much less luck later.

Landing on the keycard ledge after falling down the pit with the Quad-bike is the hardest and most random part of this level. After activating the drill and climbing out the control area I delay my jump a little as there are some strange invisible wall type things that can knock you off course (I also use it to my advantage on while jumping up the slope). The rest is pretty self-explanatory; this run is nearly perfect, even the fall down the pit was faster than usual. For some reason running people over doesn't count as a kill, so the whole run managed to be a no-kills run too.

Sleeping With The Fishes - Part 4 - Time: 5:21:
This level is odd; the starting double jump shortcut I take is extremely hard, but the rest is very easy to the point where I am almost guaranteed a successful run if I make it past the first thirty seconds or so (easier said than done).

This is pretty much a fast playthrough past the first shortcut (which saves around twenty seconds), so there's not much to add. I shoot a lot in one corridor as it makes the Guard open the door. The Dolphin at the end is sort of odd, sometimes it can push you forwards and help a little, here it knocked me back slightly which probably lost me a frame or two. The closest things to mistakes are turning a bit too much before the walk-run jump to the first fuse receptacle, sprint-rolling a bit too late after using the two valve wheels and running past the guard, and that maybe a couple of the underwater pick-ups could be quicker.

It's A Madhouse! - Part 5 - Time: 1:04:
Doninss' had already run the last two levels and most of the work was done for me, so I just added optimisations, along with some tips from xRikux89. The first cornerbug needs a really weird position and angle to work. 1:03 may be possible under TAS-like conditions, but considering this looks almost the same as a run that got 1:05 I probably only just into the 1:04 range anyway (let alone getting lower).

Reunion - Part 6 - Time not given (end time 16:31):
No time is given, but I estimate it's around 1:12 (including save penalty). Again, most of the work was done for me, so I just added tweaks. The second cornerbug is another odd one, as I warp up the exact moment I start to crawl. This level is pretty much perfect outside of the possibility of getting out the water faster in some way at the end.

I could probably only take around five seconds off this (maybe not even that), so I'm very happy with this run.