Released in April 2006, Tomb Raider: Legend was a revival of the Tomb Raider franchise by a new company, Crystal Dynamics, after the original company, Core Design, had destroyed the series reputation with their last few games (Angel of Darkness in particular). It saw critical and commercial success and was regarded as a successful reboot of the franchise... although some also considered it very dumbed-down and simple compared to the best of the original games. Lara is on the hunt for a gate to Avalon, to enter and find her mother, whom she lost many years ago. 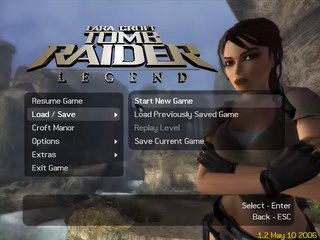 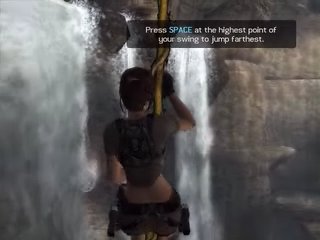 Category Note: The airwalking glitch is considered a separate category.

I decided to do this run after seeing multiple other attempts come to an end, and decided that "if you want something done right, you've got to do it yourself" rings true. While I enjoyed the game enough to speedrun it despite finding it lacking (more than I can say for some of the last Core games), there was also an element of curiosity there; considering how laughably easy and short the game is normally, I wanted to see how much you could truly break it, I'd say things worked out fine in that regard ;) . Plus the runs others had done and the speedrun guide meant that 90% of the planning work and routes was done for me.

I did the run on Hard as I thought equipment carries between levels, but I found out that that only applies to specific items (namely weapons and ammo), and stuff like medikits gets reset to a certain level. Even without that, doing it on Hard, instead of Time-Trial (which plays on normal difficulty) felt like the right thing to do, as well as allowing me to segment particularly difficult and/or irritating sections (bike rides, I'm looking at you). The PC version was used because it's easier to record, has the best, and most controllable, performance (essential for some tricks) and the pistols are much easier to manual aim, along with camera control being MUCH better (and camera seems linked with jumping making that essential for speedruns).

NOTE: The final time shown at the end is wrong! I had to re-record Bolivia after finishing the run and accidentally deleting that video, and greatly improved it in the process.

Thanks to all the SDA staff for accepting this run, Gandarufu, G-Paul and Ewil for runs and tricks (and in Ewil's case, pointing out some other aspects to running this game) and the speedrun guide here: http://www.tombraiderhub.com/tr7/timetrials/index.html for most of the tricks.

A few general notes for running this game:

Hard mode with airwalking 0:37:32 by Jarek Hanzelka, done in 24 segments appended to one file.

"Dude, so how do ya get along with teh audio commentary?"
"Yea thx for asking mate, I'm dun actually."
"Oh srsly? How many parts you made?"
"3."
"Wut? The first two were like 2 minutes long, wtf?"
"Yup, the third one is 37 minutes long or so and my mic got damaged during teh process so for the third and longest part I had to use another crappy old piece of scrap mic instead."
"OMG LOL!"

That much for explaining the audio quality difference between the first 4 minutes of the run and the rest of it.

Greetings and welcome to the text part of the Tomb Raider: Legend speedrun comments. This is my second run (and very much not the last one).

Special thanks, before I forget them:
MMAN - for his amazing airwalk-less run, from which I took EVERYTHING non-related to the airwalk.
xRikux89 - for being the owner of my soul, in other words for discovering the airwalk and for his glitchless SS run, from which a took few minor helpers and which pwns my run in few things, especially the shootouts. Too bad you can't check it out yourself, since the link is already dead. If you're interested anyway, I'll ask him to upload it again for you enjoyment.
Soul - for two of the airwalk starters.
Jackie Wu - for being very supportive and for being my best online friend since my first run. :)
And to all people that's been supportive, guys from tombrunner, verifiers and everyone I forgot to mention, and sorry if I did.

The very awesome new tricks list:
Legend drop bug - A variation of the crouch drop bug from Underworld. In this game, Lara needs to get into her "KO'ed" position and it has to happen at the edge of the place from which the drop is desired.
Grenade fall cancel - Works pretty much the same as in Underworld. Throw a grenade towards the place you want to reach, wait a bit and jump after it. With the correct timing the explosion cancels Lara's falling animation and you're happy.
Trigger-checkpoint-when-you-shouldn't-quit-resume trick - This trick is about triggering certain checkpoint when you shouldn't be able to do it, and then quitting a game and resuming in order to start from that checkpoint. This allows Lara, for example, to get behind a closed door if there's a checkpoint directly behind it. As far as I know, Tl2ophy was the first guy who showed it on video (the one in Kazakhstan). So, credit for that goes to him.

Hmmmm... there's barely anything I can tell you more through this text that isn't mentioned in the audio commentary, so just some basic stuff about the segments.

One minor mistake, other than that this segment went well enough.

Found a neat way to slip behind the gate immediately, the shootout at the end went well, although Riku pwns.

Most of the flashback went well, although I could do slightly better during the adrenaline chase sequence and I lost concetration overall towards the end.

Coward segment. Nothing tough about it, was just too lazy to repeat the swimming part each time I screw up in the next segment.

Pretty much everything went just right.

Everything before the shootout went just right. The shootout sucks, but I'm satisfied, so you are too.

Another purely lazy segment. The next segment is tough, and I didn't feel like repeating this walk n' talk bit each time I screw up.

The shootout at the beginning went extremely well and I got very lucky, the rest went just right as well.

The little minor shortcut I'm talking about in the audio commentary was found by Jackie Wu (known as Geckodust) and it's the grapple throw at 18:18. It basically turns the platform while I climb to it, which means I didn't have to waste time by turning it manually up there, which would be few seconds slower. The rest was fine, and Takamoto went down, I dare to say, pretty much perfectly.

The airwalk at the beginning went well, the drop from it was flawless and as quick as possible. The run through the untextured tunnel went well, the other airwalk as well. Rutland went down quickly enough.

This went smoothly, although I think the two guys at the end could be dead sooner.

The super cool notorious bike ride. This is the fastest and luckiest attempt ever, period. Noone will ever be able to do it this fast, I tell ya! And if someone will, well then he's a lucky bastard.

Possibly the easiest segment of the run. The thing at the end is the first usage of the trigger-checkpoint... trick.

This segment doesn't actually exist, as I kept playing from segment 14 until segment 16, but since I quit the game and reloaded, there'd be no way to verify the continuation between these segments, so I just threw it up as this is a seperate segment.

Created this segment especially for the local airwalk, which needs a lot of precision to activate. Yeah, and the "boss fight" went well, and in the end the boss actually sped me up by pushing me away from the BIG GHUN THING, which made Lara bypass her leaving animation. Credit for the gargoyle!

Everything went well, except I could've been slightly faster with the lift truck.

This segment starts with a grenade fall cancel combined with the legend drop bug. This bit alone was hard as f**k. The angle of the jump must be 100% precise. I found the OoB combined with trigger-checkpoint...trick by pure luck AFTER having a run of this level finished. If you're interested, check out this level without the OoB here.

Everything went fine, and I got extremely lucky while slipping through the blades while they were moving in full speed.

The last usage of trigger-checkpoint...trick. Manipulating with Lara in that completely untextured world wasn't half as complicated as it may seem.

This is probably the second most difficult segment, as it includes three random and very tricky things to pull of. First, the grenade fall cancel onto the slope requires tons of precision. Second, activating the airwalk in the cave requires precise angle AND the position from which Lara jumps. Finally, the last airwalk of the segment in the outdoors area with bunch of douchebags shooting at Lara basically the same thing as with the previous airwalk, except it requires even more precision.

Everything went just right, except I could've jumped from the final airwalk a little sooner to save a second.

The hardest shootout of the game to get quick, but after a bit of attempts it became a piece of cake.

The single most enjoyable, fun, pleasant segment of the whole game. While other levels took me 2-4 days to get done, this SEGMENT (not the whole level) took me over a month. Why? Because I suck. To get the final boss down like this requires 1000000% precise timing. But that wouldn't be the only bad thing. The other cute things that happen more often than not are Lara killing herself with the sword, and the magical green fire not coming out of the sword. It took me over 10 000 attempts before I figured out the cause of that fire not coming out, so it oftenly caused retries. But, once I knew what causes it, despite my belief that now the fight will be a piece of cake as well, it wasn't. It took me exactly 17 247 attempts to do this one segment. I won't bother you with too many details, but if you wanna know how I went from pretty calm to ready for hospitalization while running the segment, read from here till the end of the thread.

'Aight, that does it. Thanks for watching if you did, and see ya by some other run.