Tony Hawk's Pro Skater is the first game of a now extensive series of 10+ games and still going. It was first released for the Playstation on September 30, 1999 and later ported to the Nintendo 64 and Dreamcast. "Primitive" by today's Tony Hawk control standards, the game utilizes flip tricks, grab tricks, grind tricks, and special tricks, utilized on ramps, verts, rails, and all sorts of odds and ends. 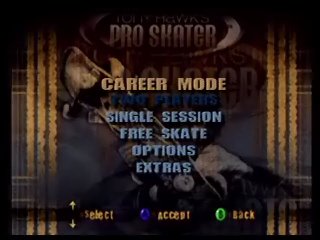 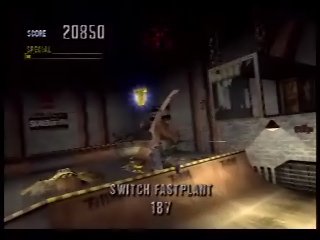 General:
SDA time is 3:19, from the in-game timer. RTA is 4:30. This run is the single segment any% record for both timing methods.
In no particular order, a non-comprehensive list of people who helped make this run possible: Nahoc, George, guished, BSGrind, ThePackle, TyPls, SilentLaws, Spiderwaffle, Discombobulator, Remedy, Kenny, MarsBars, crystal_kamikaze, Horse

Setup:
I play on N64 NTSC (v1.0) for the shortest loading times and the Config Glitch. This glitch lets me map Jump/Ollie and Grindslide to the same button (c-down). I prefer this control scheme for quick ollies off grinds and Wallrides, but I must be careful to avoid unwanted grinds. The control setting for Autokick is turned Off. This improves my top speed and dramatically increases my acceleration, but I must hold Flip Trick (default c-left) to move on the ground. I also turn Trick Tips and Score Display Off, because they clutter the screen.

Character Choice:
Rune Glifberg, Tony Hawk and Bucky Lasek are tied for the fastest speed stat, but Rune's exclusive special Christ Air is the best signature move in the game. Unlike certain other high scoring grab specials, Christ Air can be held for extra points and spun for multipliers. This makes it useful for racking up points quickly. Landing specials grants a small speed boost, and an unheld Christ Air is short so I use it on smaller jumps where Tony and Bucky do not have a fast enough special trick. The trucks setting does not change anything on N64, so I leave it on default (loose).

Misc:
Spinning during a combo adds a multiplier of 0.5 for each 180, though grinding or wallriding resets this. Holding L or R in the air spins me faster (left or right respectively) than the dpad or analog stick. Fastplants (up up before an ollie) grant more height on jumps. After pressing End Run to complete a non-competition level, there is a slow screen that animates the number of tapes achieved, then another that displays what has been unlocked. Both of these are slow and unskippable. There are two methods to get around these. Holding Z+Start for roughly 3 seconds soft resets the game, loading the main menu and it is possible to Continue Game in Career Mode. Timing this properly to activate upon reaching the final objective is the fastest way to return to Level Select. On levels where holding this button combination while turning or performing tricks at the end is awkward, the next best method is to Retry the level then End Run. Both methods award the tapes and unlockables without displaying the normal slow screens. It is possible to play some of the levels out of order; I skip Downhill Jam and save it for after Streets. This is not optimal, but it makes DHJ more consistent and easier.

Warehouse Woodland Hills
Time: 19 seconds
Tapes Achieved: 5/5
I hold R before selecting the level to immediately turn right towards the boxes. Having special meter increases max speed, so I 360 Fastplant Madonna to build as much as possible, then 180 Benihana down the roll-in to ensure it fills completely. From here to the S is a series of tricky movement and angles that took a lot of practice to get consistently. Retaining enough speed, I am able to hold forward to transfer over the ramp with the fourth set of boxes without landing on top of it, saving time. I 540 Nollie Christ Air while grabbing the K, which is enough to put my total over the Pro Score 15,000 points. After avoiding crashing into the taxicab in the middle of the A funbox, I have to properly maintain speed to break the fifth set of boxes, turn without bumping the wall too hard, ollie to the hidden tape without going too short or far, then immediately turn right and jump to the T.

School Miami
Time: 40 seconds
Tapes Achieved: 5/5
[Only 26 of the available 30 tapes are required to beat the game. It is obvious to skip 2 absurdly long goals in Streets. It's optimal to skip 2 tapes in School, but I found it easier and more consistent to skip 2 tapes in Downtown instead, which only loses roughly 2 seconds to a perfect time]. Right after the School level starts, I tap left and Nollie Madonna Benihana to land grinding on the first picnic table and to build full special. Maintaining the proper speed and grinding the planter at the right spot, I can jump off to the left, quickly jump again before slowing down in the grass, and Wallie to reach the green awning. I Kickflip McTwist when grabbing the tape purely for swag, as it's a slower riskier option than Christ Air and it serves no extra benefit other than looking hella cool. Landing a Christ Air after the K and hitting a short grind on the uphill rail gets me back toward the S fast, where I turn around sharply. Being closer to parallel to the rail when I grind it downhill and quickly jumping off and regrinding it twice builds my speed significantly. At this point, I'm already above the 25,000 Pro Score. I neglect to Christ Air over the ditch to avoid having too much speed when grinding the 3rd picnic table, which would cause me to bump hard into the wall behind it. After one more Christ Air and a few grinds for the next couple objectives, I turn sharp left and jump over the rail between the pools. Directly after obtaining the E, I start holding Z+Start to buffer a soft reset. Immediately jumping off the pool grind sends me up towards the wall which lines me up for the final picnic table grind just before the soft reset finishes.

Mall New York
Time: 37 seconds
Tapes Achieved: 5/5
At the beginning I hold L and left+down to turn sharp, let go for a split second to start moving, then hold left again before falling off the ledge. This setup lets me land directly on the downhill grind below to the S and with a couple tricks thrown in I have full special off this rail. It also aligns me perfectly for the up escalator grind. From this floor I grind the flagpole and ride off with no ollie to land on the K ledge. Jumping off the K grind early gives me room to Fastplant Wallride Christ Air up to the 3rd directory. Next, I set up a gap from the ledge grind to the A rail below. This is the only other part of the level where I have enough hangtime to safely Kickflip McTwist. My speed is kept high enough to Nollie the edge of the pool and reach the high pipe, grabbing the Hidden Tape and 4th directory on the way down. The rest of the level is a series of short grinds and adjustments up to the E ramp where I buffer another soft reset.

Skatepark Chicago
Times:
First Round: 2 seconds
Second Round: 2 seconds
This level has an exclusive glitch where holding L and up+right at the beginning turns me considerably faster than normal. 5,000 points without bailing each heat is enough to receive a judge score sufficient for 3rd Place. The quick turn aims me toward the wall so I achieve the needed score using a 360 Flip Wallride 360 Benihana. Using a new trick and ending the run in the air avoids needing to wait for the score to count up. I use Japan Air because it's an easy input and safe trick with an exaggerated pose that is a good visual cue to confirm the counting skip will work.

Downtown Minneapolis
Time: 6 seconds
Tapes Achieved: 3/5
On the left wall I Nollie Wallride 50-50 Grind Madonna for over 5,000 points and to max out special. To scale the building on the left, I Fastplant Wallie and use 360 Flip on the way up to where I grind the roof. I jump to the right to grab the Hidden Tape and use R to spin 540 degrees while adding a quick Benihana then a held Christ Air. Altogether this combo adds up to push me over the 40,000 points needed for the Pro Score tape. As in Skatepark, I Japan Air before pausing in the air to skip the score counting and to avoid getting slammed by the taxicab here.

Burnside Portland
Times:
First Round: 5 seconds
Second Round: 5 seconds
I need roughly 15,000 points each heat to earn judge scores high enough for the Bronze Medal. I get plenty using 2 combos in each round. The first one is to quickly build special and line me up for the second. A Fastplant and spun Christ Air gains enough points, and this jump is high enough to allow for some variation such as my 360 Shove It in Heat 1.

Streets San Francisco
Time: 25 seconds
Tapes Achieved: 3/5
After getting special from 2 quick tricks, I Fastplant 360 Shove it and land grinding the rail. I ollie Christ Air to land on another grind below, then don't ollie to avoid a weird glitch that prevents inputting tricks at the end of this combo. With a spun Christ Air to finish out I've already achieved the required 50,000 Pro Score. I ride to the back of the building and wallie up to the awning, and head for the roof. I kick up the ramp once but slow down near the top to avoid getting air on the initial ramp, which could throw off my speed. On the plateau, I hold forward then start kicking again to accelerate on the decline and start buffering the soft reset. I Fastplant to the hidden tape then the game resets.

Downhill Jam Phoenix
Time: 46 seconds
Tapes Achieved: 5/5
I perform a combo down the roll-in to get special, then fastplant to the rail to break the first valve, then jump left to grab the S quickly off the small ramp. After setting up the correct angle towards the 2nd valve, reaching the cliff and then making the gap from the K rail to the 3rd valve rail is straightforward. After getting the A and the following grind, I Christ Air on the quarter ramp to get full speed and use the analog stick to line up the difficult Fastplant to the hidden tape. The 4th valve and T are simple, then there's the tricky jump where too harsh of an angle will prevent me from gaining enough height for the E rail. I jump off the rail to complete the Pro Score then fall into the water to set me up for the final valve wallride.

Roswell New Mexico
Times:
First Round: 6 seconds
Second Round: 6 seconds
The final competition requires a whopping 25,000 points per heat to earn the Bronze Medal. Fortunately, I can reach that with 2 quick combos. 360 Fastplant Madonna 360 Flip to reach special, then 720 Fastplant Christ Air is over 30,000. I simply do these both heats, and end the game.