Released in October 2005, Tony Hawk's American Wasteland is the 7th title in the well received Tony Hawk series, allowing the player to once again string ridiculous chains of physics defying tricks together that bear no real resemblance to actual skateboarding. There's also a story or some such. 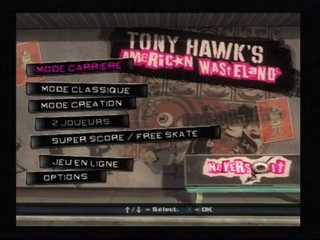 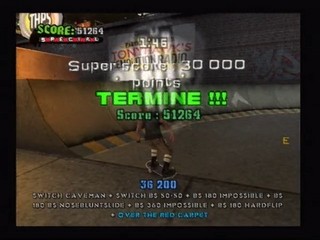 SPECIAL THANKS TO GEORGE for helping me out with the routes and taking time to record routes videos for me! You rule.

When I began to start working on it, I realized I could do it in 10 mins. Then I kept improving the run...

I've found runs on youtube, they're around 6 minutes but I totally reject their rules since all they do is reach the last level of the mode. Reaching this level is easy, but it doesnt complete the game in any way. In order to complete the game (e.g: get the on-screen message saying it's complete, followed by a skate bails video), you have to complete 52 out of the 60 goals of the game. I haven't counted the number of goals you have to complete to just reach The Ruins (last level) but it must be something around 35. Anyways I still reject the idea of not completing the game.

I won't go too far into details about this (you'll be able to see the goals i've chosen to complete and those i prefered avoiding in the video) but let's say that I do a 100% run on Minneapolis, Chicago and The Mall. This gives me 30 goals. I do 17 more in Santa Cruz + Kyoto. The main strategy is reaching The Ruins (last level) as fast as possible with 47 goals in my bag in order to do a quick combo in this last level giving me the 5 I miss to get 52 goals.

So obviously, the point was to do a wise choice of the goals to avoid. Which I think I did :)

- The game is played on a PAL PS2 with the PAL game. I've tested the NTSC version, i only noticed a music playlist a bit different and one goal on the PAL version is a bit harder to get recognized by the game even if you do it well. Anyway I keep the PAL version, since my NTSC is not an original and i get display troubles with it. Sorry guys, the menus and written stuff will be in french Smiley (yeh, I'm french).

- I didn't use a save. I don't even find my memory card at home, and its more challenge this way :)

- The rule above also means that my character will have the basic stats of the game. I'll only add ollie, speed and switch stats at the end of 1st level. The only thing I'm gonna do with the character is adding an already included "created manual", to let me do a few wallshuffles and airshuffles (see the glitch section).

- No cheats. The physical possibilities of this game are already awesome the way they are.

Tony Hawk games are maybe the most "full of glitches" games that I know. It is also one of the reasons why people who played them online with the TH community still love them. I'll explain very few of them so you'll understand my video a bit better when it's gonna be out:

Out of bounds and clipping: the game is full of these. I won't use them in order to gain speed or anything BUT since there are a lot of them in the game and since my route can't be 100% the same at each try, you may see random ones appear. Most of the times it makes me lose time. Depending on how much time it makes me lose and how good I did before it happened, i may chose to continue the run anyway. I already know that this run wont be 100% perfect. It cannot.

Buttslap: buttslapping is a very common glitched technique used in the TH community. Its done by a very quick manipulation that allows you to ollie twice or even more in certain circumstances (end of a platform, objects with a 45 degrees angle...). For more details: https://www.youtube.com/watch?v=Mbr0Hknd-x0. As you can see, it's done on TH Underground 2, so it's not specific to THAW.

Air Shuffle: In this episode of the TH series, you are able to create tricks. Of course this lead to another glitched technique : the game allows you to launch a Created Manual while you are in the air. Since it also allows you to jump during a manual, you get the ability to do this loop: jump/created manual/jump/created manual/jump...etc. I won't abuse this glitch, but since it takes gameplay skills to do this when needed and makes the run funnier to watch, I allow myself to do it.

Wall Shuffle: Same as above but you add a wallride in the loop. Its harder than the previous one. You may see me do it sometimes, if there's a long area to go through without rails or stuff allowing me to go fast, or if i need to go up a building and that my basic jump isn't high enough. This technique is really risky since it can fuck my run up by bailing or going backwards.