Released in October 2009, Torchlight is developed by Runic Games as a spiritual sequel to Diablo II. The single player action RPG is set in the mining boomtown of Torchlight, which rests atop a rich vein of a magical substance called Ember, which creates enchanted items that draw many adventurers to Torchlight. The player is an adventurer that is recruited by a sage named Syl in order to find her mentor, Master Alric, who disappeared into the mines. The player descends into a series of randomized dungeons in search of Master Alric, unintentionally unveiling the corruption of Ember and eventually battling the ancient creature responsible for the corruption. 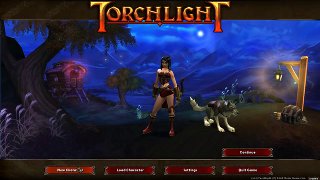 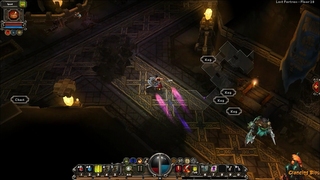 Vanquisher is chosen for her XP glitch and movement speed increasing attack skill. Most floors of Torchlight are randomized, making it hard to always take the optimal path on a single segment.

Town: Get Haste (for free, because of a little glitch with putting it directly into your spells) and 3 mana potions so I can afford to use it often. I have to wait 30+ seconds here to reset the vendors for my trip into town after I hit level 25.

Orden Mines - Floor 1: Run past most enemies, they give too little exp.

Orden Mines - Floor 2: Almost went the wrong way, because the right way is rarely behind a door, but I decided to go through the door after noticing a miniboss. I end up hitting level 2 here and get the Needle Arc skill, which is bugged to cause you to gain more exp if the kill is done by its damage over time effect. In addition, it will give you more exp for the lower the damage dealt by it is, so I don't put any points into stats yet. I set my pet to never attack after I get this, so he doesn't take any kills. I don't get Brink into my party for the same reason, I just run by him. I take the skill Stab for early bosses and minibosses, it does considerable damage for the lower floors. I will still be avoiding most enemies because I one-shot them with my Needle Arc, which ends up giving low exp.

Orden Mines - Floor 3: I make sure to kill any minibosses I see here, avoiding a lot of other enemies. Minibosses give a huge amount of exp, and also give Fame, a second form of exp that when you get enough of gets you a skill point. I put stats into defense in order to wear a shield I find. On this floor I get a high enough level to start putting points into two more skills, Adventurer (increases exp and potion healing), and Defensive Spell Mastery (increases the skill level of bought spells of the defensive type, which Haste is. This makes it so Haste lasts around 2 seconds longer per level, and is a bit faster.)

Dank Chamber: First boss, I use my Pet and Stab to weaken him and finish him with Needle Arc DoT. Can't skip the cutscene afterwards.

Tomb of the Awakened - Floor 5: Here is where most of the leveling is done, I now will be attempting to get as much exp as I can, especially from minibosses and skeleton enemies. I start using Stab a lot here, to weaken down high hp minibosses. Criticals are my worst enemy here, I can accidentally kill a boss with a too high damage Stab.

Lair of the Sisters: More leveling. The boss here is annoying to get a Needle Arc kill on because they can all heal back to full if left alone.

Overseer's Chamber: Boss floor, I make sure to hit 25 here so I can efficiently kill this boss. After I hit 25 I head back to town to do all my inventory management with new spells and the like.

Town: Game time doesn't increase while paused, and I abuse this a bit to get ready for the second half of the run, where I become gradually less and less prepared. I abuse a duping glitch to take a cold-ember and transmute it up to the highest quality. This is very important in surviving the last boss fight, and also in affording potions. The boss ends up one shotting me because of my terrible low-level gear if I don't socket all my gear with cold-embers for the resistance. These gems also sell for a high amount, letting me get the ridiculous amount of GP I need for affording the potions I will be guzzling constantly for the rest of the run.
I get a few skills here, and pump most of my stats into Dexterity for damage. Arrow Hail will be my new damage skill, it does a considerable amount of damage over time effected by Dexterity. Hamstring I will be using constantly for its movespeed increase, and it also helps me gain a few levels from its damage to enemies I run by. I pick up a mana regen skill, and a critical strikes skill, passive effects to help me out.
I buy some socketed gear from the shop to stuff more cold-embers into, and then I pop into the dungeon to reset the vendors.

Overseer's Chamber: Back to town!

Town: I pick up another Haste spell (different levels stack), and two Summon Zombies spells for boss fights to help lessen the damage I take.

Overseer's Chamber: I finally head to the boss and take him out. He drops a permanent +25 to health but I don't want to screw around with his bad loot for the minor increase. Some unskippable cutscenes and I'm on my way to the next area.

Estherian Antechamber: Pick up a quest and run into a portal.

Estherian Ruins - Floor 10-15: A whole lot of running. Shrines of mana are very lovely, instead of just filling up your mana once they will continuously fill it up for a short time.

Estherian Antechamber: Run into a portal. Boss portal this time!

Estherian Ruins Boss Room: Run to the boss and take him out, ignoring his loot again. On to the next area.

Tu'tara Caverns - Floor 17: Very annoying sometimes, there isn't always a whole lot of rhyme or reason to the layout of this, and there's a ton of dead ends. Combined with the very narrow bridges sometimes forcing me to kill, this ends up being one of the worst areas.

Tu'tara Caverns - Floor 18: I pick up a level here and get more points into Arrow Rain and my mana regen spell, but not Hamstring. Hamstring only increases in damage and mana cost, not movespeed, so it isn't worth it.

Tu'tara Caverns - Floor 19: I find a dungeon vendor here with a slotted necklace that I grab and throw a cold ember into, preparing for the final boss again.

Vast Chasm - Boss floor. I kill him in mid-air, surprisingly he isn't invulnerable when jumping.

Molten Prison - Floor 21: This area isn't too bad, it can't be hard to tell what is and isn't a path, but it is easier to tell what way will be a dead end. I pick up elemental protection and replace one of my zombie spells, because I figure it would help more.

Molten Prison - Floor 23: I get a socket enchant on my shield, and throw more cold resistance onto the pile. I am very cautious about that final boss.

Prison Stronghold - I run straight to Krag and try to take him out regardless of his many healers and manage to do it with my huge DPS, and then I bail to the portal.

Lost Fortress - Boss floor: Medea makes copies and then she dies. I see a pretty orange rifle and proceed to cry when I can't use it.

Black Palace - Floor 30: Here is where things start to actually hurt. I have to be more careful about running willy nilly into groups of enemies. I see a shrine of enchantment that I really wanted to use but there were enemies blocking it off.

Black Palace - Floor 32: I take a wrong turn to a pile of gold where I really shouldn't have, but it doesn't cost too much time.

Black Palace - Floor 33: I gain a level and finally use all my skill points.

Black Palace - Floor 34: Quick run to the boss, who gets killed pretty quickly. He starts running away which makes him take a bit longer, unfortunately.

Lair - Floor 35: The last floor and last boss. He is far stronger than all the other bosses combined, and would destroy me if I hadn't gotten so much cold resistance. I put my zombies and pet to good use here as decoys and lure him to where the final cutscene will take place, and where I can hide in a corner to prevent his minions from hurting me. He has such an absurd amount of hp that it takes me a good while to kill him even with how quickly I killed everything else. I almost run out of mana potions, but he dies before I have to run around and grab more. Last game cutscene plays and I show the time.