Deadline Games' 2005 third person sandbox shooter Total Overdose (or Total Overdose: A Gunslinger's Tale in Mexico as it is known in the US) borrowed its main ingredients from the Grand Theft Auto series and added some original ideas to the mix. These ideas include such things as bunch of special loco moves, a rewind function and a crazy, over the top plot that revolves around an undercover agent's brother who takes his brother's place after an accident and infiltrates a drug cartel. 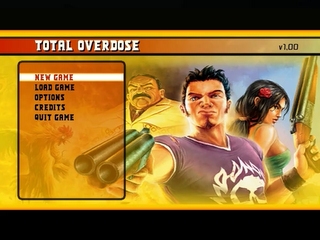 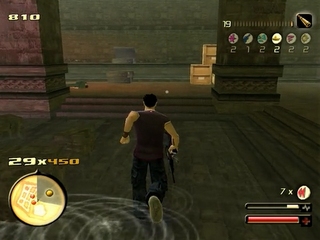 First of all, I'd like to thank msqrt for some tricks and pointing out stupid things in my routes, nate and ballofsnow for their help with the encoding and the SDA staff for keeping the site up and running.

A few general notes about the game and the run before the comments on the levels:
- In the beginning I go to settings to prove the game is on hard difficulty. I do this because personally I can't tell the differences between difficulties.
- I die quite a few times during the run. The rewind-system is very forgiving so I take a lot more risks than I would without it, sometimes that pays off, other times it doesn't. The AI can also be unpredictable and cause random explosions that kill me in one hit.
- The damage works very strangely in this game. Sometimes I can run into a hail of bullets without losing any health and sometimes a single enemy with an uzi can drain my health close to zero with one burst. I don't know the logic behind this but since the dangerous enemies and situations are always pretty much the same, I know where to be careful.
- El Toro and El Mariachi are the two most important loco moves. El Mariachi destroys the bosses easily and El Toro speeds up missions with a lot of running. Falling cancels El Toro so it can also be used to get a temporary invincibility.
- It is only possible to have 2 of each loco moves at a time and they are given at random after high enough combos. This is why I don't use moves other than El Toro and El Mariachi: When I already have 2 of each of the other moves, the game will always give me the most needed moves.
- Some point challenges must be completed to unlock story missions. Unlike in story missions, I need to reach lowest score limit to beat the challenge (this only makes a difference in the first two challenges). In this run, I of course completed the shortest challenges possible.

The Father - The Bad Son
The Father and The Good Son are as good as they should always be, the only tiny mistake is missing the last headshot in TGS. I play a bit risky in The Bad Son, I don't usually get that many warnings about leaving Marco behind. It pays off and my time after TBS is great.

Burrito Boost - Steal the wheels
I need certain scores in the challenges, 600 in Burrito Boost and 2000 in Burrito Shopping so I need to do some extra killing, especially since I suck at math. The rocket launcher gotten from from BS saves a ton of time in Smash the Stash, but it only has two rockets so I need to use vans for two of the towers. The last tower very nearly kills me but by killing a few enemies I get enough health to (unexpectedly) survive. In Steal the wheels I'm less lucky, getting stuck when landing and losing control of the car more than once are not nice things. At least the barricade skip is very smooth.

Dope Dealers Must Die - Get the Trucks
Very good section. The challenges are easy and I get a deathless Get the Trucks, which is not common because the guys in the ship usually like to block my path and throw a lot of grenades.

Sombrero Shootout - A Saving Angel
The automatic weapon switch really wants me to use the useless uzi in Sombrero Shootout, not my weapon of choice. Escort the Trucks is based on killing the enemies that are on the ground, including the cars which are on a timer. The very last enemies are a bit slow and I have really bad luck with the random explosion, but overall it's still decent. In The Ambush I use an El Toro -cancel, which basically just makes me invulnerable for a while. I can't use the switch when El Toro is activated so canceling it saves me a second of waiting at the switch. The random meat walls are co-operative but I still waste some seconds by not noticing the hole in the last one. And that guy on the conveyer belt near the end... Most dangerous enemy in the game, by far. I probably shouldn't have counted on the wonky damage system to let me survive the grenade but I did anyway.

Tequila Trouble - Kill the Bull
No problems in Tequila Trouble or El Macho Meeeting in which you see the first grenade jump of the run. Kill the Bull goes well, despite having bad luck after the ring fight and the game's fantastic way of spawning enemies.

Downtown Gate Hunt - Highway Attack
No problems in the challenges or The Car Dealer, all went great. Make Elvez Sing on the other hand... Definitely the low point of the run. That jump has killed so many runs before and this one was very close to becoming one of those. I've had bad luck at it before but making the first jump and the messing up the second one so that I had to do the first one again is just amazing. Fortunately Highway Attack goes better than expected, usually I die there because of the excessive amount of grenades and machine guns.

The General - Escape the Jungle
Aside from the Elvez grenade jump, I consider the jungle levels to be the hardest part of the game. The plan was to use El Toro to climb the pyramid but since I didn't have one I had to do it the normal way, which just about always, like in this run, involves dying. Luckily I got the El Toro before going into the pyramid, where it saves about as much time as when used when climbing. When getting back out of the pyramid I have some bad luck, I can't kill the guy with the grenade launcher in time thanks to the game's incredible spawn system and the guy in the stairs gets me too. Despite the deaths, I still think it went alright overall. If The General was okay, Escape the Jungle was amazing. Only one death (which I call bullshit on, that rocket wasn't even close) in what's probably the hardest mission in the game is very good.

Dockland Gate Hunt - Save the DEA
The challenge and Overdosed went both as well as expected, the only part that can be messed up is the grenade jump. Two nasty but not at all unusual deaths in otherwise good Save the DEA. A bit of trouble in one part of The Getaway Train, the machine gun and my poor choice of weapons cost me some time. After that mess I used an El Toro cancel to get past the rest of the enemies. Luckily I was still invulnerable when the rocket hit me, I had forgotten to test that beforehand. In the train gun fight I use both Golden Guns to win in seconds...Or that was the plan, but of course I had to have a last second brainfart that made me press the wrong buttons so the last bullet missed. I can still easily destroy the train with the uzi, but it still is a stupid mistake right in the end.