Town & Country Surf Designs II: Thrilla's Surfari by developer Sculptured Software should probably just be referred to as Town & Country II from now on. The All Game Guide review suggests it's "vastly superior" to the already quite neat first installment in this series where surfing and rollerskating up and down winding obstacle courses is the order of the day. When you speed run it you need to avoid the coconuts because of a mini-game they lead into. 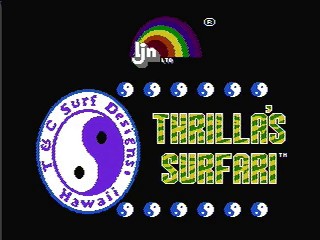 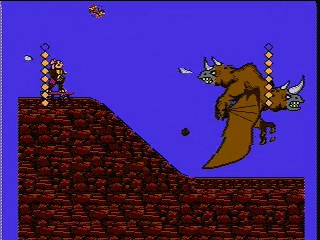 My previous record for this game was 15:30. My new time comes in at 14:15, a minute and 15 second improvement. After my first run I thought maybe another 10-15 could come off it, so this is obviously a huge improvement. All of the time gain came from a runner I randomly found on Twitch, neo_sporin. He had a run that included 3 OOB skips that I didn't know about, which knock quite a bit off the total. So after I short night of grinding with this new route I was able to come out with this run. It's pretty good but I'm sure could fall a bit more with some hardcore grinding.

Now for the level breakdown

1-1 - Pretty standard, not really possible to get any faster

1-2 - Same as the first level, these are just warmups for the rest of the run

3-1 - Beginning is very easy, time for some showboating off the enemies, until we get to one of the main ways of reducing time in the desert levels. "Ramp boosting", or jumping to the outside of certain down hill ramps, I do 4 in a row, greatly increases your speed and you're able to stack the speed up to get going quite fast. Not sure of the exact amount of time but I'd guess it saves at least 10 seconds in this level.

3-2 - Similar to 3-1, avoid the rocks, hit 2 ramps boosts and then another, get invincibility and roll to the finish.

3-3 - Probably the easiest level in the game, go straight, hit two ramp boosts and you're done. This level is a mirage, so we aren't worried about getting coconuts in this level.

3-4 - The first boss we face. The bosses are pretty much the only random elements in the game. He gave me a really good pattern, maybe only lost a second on him.

4-1 - One of 3 huge time savers in the run. Intended route is to go left at the start, down and then back right and up to get where the skip takes us. By going right at the start and timing it correctly you can just jump clear through rocks and skip the whole loop. Saves probably 35-40 seconds

4-2 - The is where the levels are starting to get difficult and will kill you real quick if you slip up at all. Main time saver on this level is hitting the magic pixels on the final stretch to avoid the mass of coconuts, it's a tight window to both avoid the coconuts on top and the logs on the bottom.

4-4 - Underwater section, mash B to go fast. Just keep going down and right and you get to the finish. Gotta watch out for the Octopi, they can do a lot of damage very quickly and mess you up.

4-5 - The freakin shark, my biggest run killer. He's random with how he moves, what he spits out and the speed he spits things out. Actually had a really good fight, he only blocked one of my shots.

5-1 - Same as 4-4, down and right, shooting the seaweed at the beginning can be tricky but I got both of them decently. And juke the Octopi

5-3 - This level had the first new OOB clip. Probably could have saved a few seconds by getting the clip faster. After the clip my main concern are the electric eels, they're 1 hit kills. Get to show off a little swag on the gators at the end.

5-4 - Fairly difficult jungle level. Not much to say here, I pick up the banana for one extra HP for the Rhino fight.

5-5 - The Rhino can be pretty though, his horns do a lot of damage, you can't take many hits before you die. So I just sit in a safe spot and spam him from a distance, it's the safest strat. Pretty good fight, very minimal time lost.

6-1 - Probably my least favorite level, just a whole lot of tricky jumps throughout, particularly right at the very end. Getting 1 coconut is ideal, but 3 is acceptable.

6-3 - Taking the top river is the faster route, you fly down the river and it drops you right on the finish. For some reason I got stuck twice on parts of the course, probably cost me maybe 5 seconds.

6-4 - Second huge time saver. Exactly the same concept as 4-1, skips the loop around, saves at least 40 seconds over the intended route.

6-5 - The second scorpion fight, he does a lot more damage than the first one. So you just jump back and forth, taking potshots at him when you can. Had a pretty solid fight and got a good kill on him.

7-1 - The beginning of the end. 2 new OOB clips are used in this level to save a good bit of time.

7-2 - The second to last huge time saver. There is a certain lavafall where, if you have enough speed, you can jump OB and fall directly on the finish, not sure if it's intended, but it was pretty neat to discover.

7-4 - Last level, and last new OOB clip, this ones saves like 40 some seconds, I think. I could have gotten the clip a bit faster, but I didn't want to risk missing it because that's a reset on the final level. The really neat thing about this clip is that you fall from 7-4 to 7-3, the previous level. So you end up going through the end of level 7-3 again with no enemies spawned and then exit through the 7-3 exit, technically a wrong warp? Probably the most interesting new clip.

7-5 The final boss, who happens to be a complete joke. Stand in the pretty forgiving sweet spot and spam away. Enjoy the cutscenes of Thrilla and his (one armed?) human girl friend. The 90's were a magical time.

Pretty good run, I really think this time that only 10-15 additional seconds could come off, unless some more crazy skips get found.