Released on October 1998, Trespasser is a sequel to The Lost World and Jurassic Park. You take control of Anne, a casual city girl who crashed on Site B, and you have to get out alive. Trespasser was an ambitious project, with attempts at a superior physics engine and artificial intelligence, and the intent to revolutionize 1st person shooters. 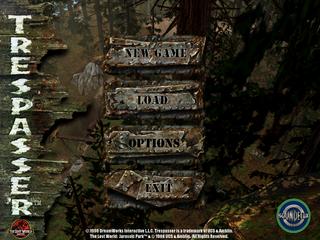 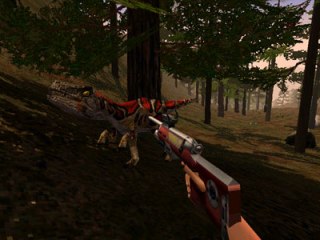 Hello and welcome to the official guide of how to escape a dinosaur-infested island in less than 1 hour.....ok not really :p Better say, welcome to my speedrun of trespasser. In caise you didn't know, trespasser is the direct sequel to "The Lost World: Jurassic Park" movie. It puts you in the socks (or better say dress..) of Anne, a completely casual and normal city girl who's decided to take a turistic flight around the islands in Costa Rica. Of course, something goes wrong and the plane crashes into the pacific, and surprisingly enough, Anne's the only survivor, but even more surprisingly, the island she's been washed up on is Site B, the island from the 2nd movie. Your objective is simple, survive and escape, using any means at your disposal.

While it does sound like your average first person shooter, well, it isn't. This game came out in 1998, and was way ahead of it's time. It featured extreme amounts of details, ridiculous physics, and creative design. The big problem is that it was suffering from bad gameplay and graphics glitches, mostly because we are talking about a game of approximately the complexity of half life 2, and made runnable on very low end PCs. While it is butchered, it was innovative to the FPS category back in the day, and was also an inspiration for the Half Life 2 team.

I started playing this game to see what kind of spedrunning possibilities there were about at the beginning of October 05. At the first few times I tried playing it, it didn't seem like a good choice for speedrunning, and it even ended up looking downright boring to watch, even if you played the game before. However, after doing some research and messing around with the game I figured out quite some stuff that made it quite good to speedrun. When I started playing, the game seemed quite big in size, and I was aiming for 1 hour 30 minutes. The count went down as I played the game and found out it can be finished quite fast, and in the end I ended up with a time 40 minutes faster than what I initially expected. I must say that, if you haven't played this game before and you're looking for entertainment, you will most likely not find it in this run. I also want to add that if you played trespasser and are looking for a doom 3 type of blood bath speedrun, you won't find it either, as in this run I basically skip though almost everything. I'm not trying to discourage people from watching it, I'm just trying to prevent people downloading a 150 MB video for nothing.

Below are my comments on each of the levels.

Level 1: The Beach (3:39) — This level went fluently and I didn't have many mistakes. Mostly some bad bunnyhopping that costed a couple seconds.

Level 2: Jungle Road (4:31) — On this level I take big time saving shortcuts by cutting terrain via alternative routes. It went pretty good, even though could be a few seconds faster.

Level 3: Industrial Jungle (10:25) — Definitely the longest and most annoying level in all the game. I at first did it in 2 segments, and ended up with a time of 11:00, but the 2nd segment was atrocious. It had me getting stuck multiple times, getting confused, taking slower routes and just doing the tricks too slow. I added one more segment, which saved me 35 seconds worth of cleaned up mistakes. Now I'm fairly happy with this level, and there aren't many mistakes.

Level 6: Ascent Part 1 (8:02) — This level went overall well. I walked instead of jumping in a couple places, but that's about all I can see. I must say what I do with the t-rex at the end is quite scary :p

Level 7: Ascent Part 2 (9:33) — I broke up this level in 3 segments. It can get really annoying at times, especially at running past the raptors in those really tight roads when climbing the mountain. Overall went well.

Level 8: The Summit (0:47) — Mhm, I know what your maybe thinking, how's summit finished in 47 seconds? It's basically a secret ending, which saves something like 3 minutes or so allowing you to skip nearly all the level :p It's pretty much the best part of my run. I'm kinda sorry I had to kill Anne to reach the helipad (since that she almost made it through the island, and dieing on the helipad at the very end is evil), but 8 seconds saved makes up for the suicide :p

Total time for all levels add up to 47:30. Even though that I feel I could deliver a better run myself, even if I'm happy with this, I probably won't try. The reason for this is that this game leaved a sour taste in my mouth. Even though it is a game that can be broken and finished quickly, it's definitely not the type of game that feels "right" to be speedrunned. Well, whatever. I put a run together for those that wanna see how this game can be finished quickly, and for those that wanted to see some kind of run for this game. Have fun watching, I hope you'll enjoy it. :)

TresCom — Thanks for the walkthrough and the "Easter eggs" section. They are responsible for some small tricks in levels and they also let me know about the secret ending in The Summit.

Andres James — Thanks for making TresED (trespasser level editor) which allowed me to explore the levels in great details and find some faster routes aswell as some tricks. William Beck — Thanks for posting on the cheat codes site Game Winners the town gate glitch.